Pedro Castillo became president of Peru and for the first time in history a peasant will lead the country. Last Wednesday, Castillo took office in Lima and made the first speech assuring that he has arrived through the people to govern for the people and build “with those below”, giving the line of what will be the priorities of his mandate.

The new head of state has also announced that he will not be dispatching at Casa Pizarro, named after the Government Palace, in honor of the Spanish invader Francisco Pizarro. The building will be transferred to the Ministry of Culture to be transformed into a museum.

“We must break with colonial symbols. The three centuries that this territory belonged to the Spanish Crown allowed it to explore our minerals that supported the development of Europe, with the effort of the grandparents of many of us,” he said.

This Thursday (29), there will be a new swearing-in ceremony in the city of Ayacucho, where Peru’s independence was proclaimed 200 years ago.

Also read: Who is Pedro Castillo, new president of Peru

One of the main goals of Castillo and his party, Free Peru, is to reform the constitution. However, the current Magna Carta, enacted in 1993, during the Alberto Fujimori regime, does not provide for any type of change mechanism, other than amendments that can be approved by the legislature.

Without a majority in Congress, Castillo has signaled that he will present a bill and, if not approved, will seek to call a constitutional referendum. “We will insist on this proposal, but always within the law,” he said.

Pampa de Quinua, in Ayacucho, site of the country’s declaration of independence 200 years ago, will host a symbolic inauguration ceremony for the bicentennial president / Andean Agency

As an elementary school teacher, another fundamental theme is education. Castillo said he will declare an educational state of emergency. He promised to increase the portfolio’s budget to 10% of GDP, increase connectivity in schools, making internet access a right, launch a literacy campaign and modernize political pedagogical projects with the participation of teachers and the community.

Its project is “to recover learning and prevent inequality from growing”, indicating that it intends to reopen schools in the first half of 2022.

To young unemployed people who do not attend any educational institution, the president indicated that they should enlist in military service.

Peru has been the country with the highest fatality rate for coronaviruses in the world for months, with almost 6,000 deaths per million inhabitants, so another task will be to defeat the pandemic. For this, Castillo will increase the budget for primary care, create five thousand community and comprehensive care teams, as well as accelerate the pace of vaccination to have the entire population immunized by the end of 2021 – so far about 12 million doses have been applied.

He promised that one of his first works will be to build specialized hospitals in the interior of the country.

Castillo announced the creation of the Ministry of Science and Technology to increase investment in scientific research, as well as work towards a 30% to 40% reduction in carbon emissions: “We own 13% of the Amazon. We have already devastated hundreds of thousands of hectares. this trend. The Amazon is one of the legacies that we will leave for future generations.” 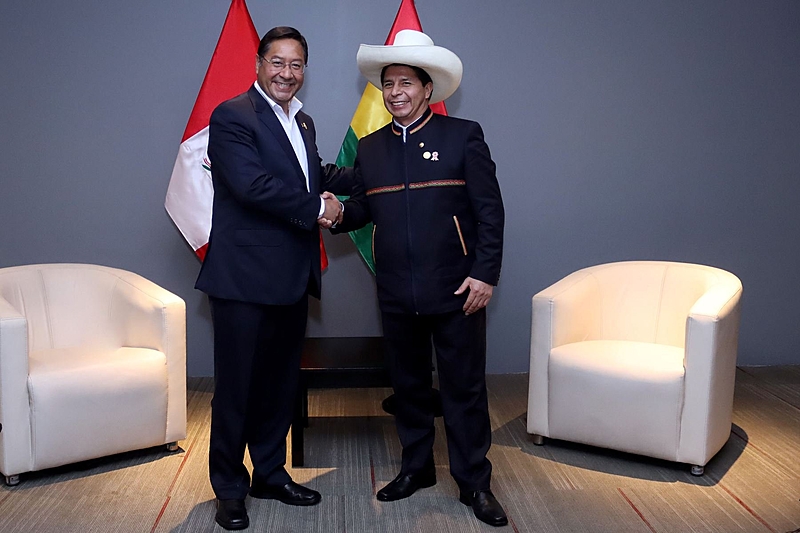 After meeting Bolivian President Luis Arce, Castillo announced the reopening of a binational cabinet between Bolivia and Peru / Andean Agency

The Peruvian president also follows the spaces of his Bolivian neighbors, increasing recognition of the original peoples who built the country. He guaranteed that in regions where there is a greater presence of indigenous peoples, Quechua and Aymara will be official languages ​​in state bodies.

Pedro Castillo and Luis Arce also agreed to reopen the binational cabinet to deal with strategic and cooperation issues for the two countries.

The new president promised to create one million jobs in one year through the “Trabalha Peru” program. About 70% of the economically active Peruvian population is in the informal sector.

It will also provide emergency aid of 700 soles to all the most vulnerable families.

Faced with the media campaign that the newly elected president represents a “communist threat”, Castillo emphasized that he does not intend to carry out expropriations or any kind of confiscation of private property. However, he assured that it is necessary to review the presence of monopolies in the country.

Castillo also said that he will renegotiate debts with small and medium-sized companies in the agricultural, tourism and transport sectors.