The debate on municipal, state and federal administrative reform is advancing in the Federal Chamber. The proposal, which is being debated in a special committee of the House, which is expected to be voted on this Thursday (16), has generated much controversy.

The end of civil servants’ stability, contracting for a fixed period, dismissal from “obsolete positions” and difficulty in accessing basic rights are some of the changes that can be implemented with the reform that affect civil servants and the organization of the Brazilian State.

But, in practice, how can the measures of the Proposed Amendment to the Constitution (PEC) 32 impact the population of Rio de Janeiro? Which services can be most affected in the state of Rio de Janeiro? In this article, the Brazil in fact answers these questions. Check out.

First, according to the technical note “The effects of administrative reform for Brazilian society” published by the Inter-Union Department of Statistics and Socioeconomic Studies (Dieese), “the proposal for administrative reform attacks democratic achievements and social pacts built since redemocratization. Its effects, therefore, are related to the deepening of social inequalities and the fraying of the social fabric”, highlights the text.

For the state of Rio de Janeiro, which is experiencing a socioeconomic crisis and closed the first quarter of 2021 with a total of 1.6 million unemployed according to a survey by the Brazilian Institute of Geography and Statistics (IBGE), the impact of the PEC 32 could reach even more serious thresholds.

Read more: Live: what is administrative reform and why are there protests against it?

In the evaluation of Flávio Sueth, president of the Association of Public Ministry Servants of Rio de Janeiro (MP-RJ), the measure comes at a time of crisis when the population most needs public services.

“The economic difficulty makes the people more need public hospitals, public schools, access to free justice, lower public prices like water. Rio de Janeiro is a state in crisis and with an impoverished population. With the project to make the public service precarious and unfeasible, this population will further pressure the demand for such services. The result of this social tension will simply be the lack of hope for better days”, explains Sueth, who is also a member of the Permanent Forum of Public Servants of the State of Rio de Janeiro (FOSPERJ).

The areas of health and education will be the most affected if the PEC 32 advances. According to Alexandre Telles, president of the Union of Doctors of Rio de Janeiro (SINMED-RJ), there are currently more than 800 closed beds in the federal network of Rio de Janeiro and the main reason is the lack of human resources.

“These are outpatient clinics that are being closed or are getting reduced capacity and also beds that cannot be opened, at the same time that we will have an increase in the regulation queue for these hospitals. The population of Rio de Janeiro will be in line longer and without the prospect of proper functioning”, explains Telles.

The doctor also draws attention to the fact that most of the Ministry of Health’s vacancies are in Rio and there is a deficit of 15 thousand servers in the nine health units linked to the agency – including federal hospitals and specialized institutes. According to him, the Ministry of Health authorized only the occupation of 4,117 vacancies by temporary contracts, precarious and without rights.

The information is reinforced by a survey by Dieese that points out that there is already a tendency in the country’s Public Health to prioritize other forms of labor hiring that are not public examinations. According to the department, the proportion of employment contracts in the Unified Health System (SUS) with stability (statutory) over the total number of jobs fell from 41.5% in 2012 to 39.2% in 2016 and contracts per CLT represented 58.6%, while other types of bond represented 2.2% of the total in 2016.

Education is another worrying area in Rio for professionals in the state and municipality who have accumulated, respectively, eight and three years without salary increases. According to Duda Quiroga, from the Secretariat for Strategic Affairs of the Union of Education Professionals (Sepe), the reform could affect everything from investing in the continuing education of teachers to making the educator hostage to the current government.

“If the dynamic of the ‘non-party school’ starts and you are in an ‘X’ or ‘Y’ government, you may be under pressure and if you are appointed, sponsored and not stable, you will not be serving the population but to the government. In addition, it changes the logic of the public service to one in which the State will be a subsidiary where the private sector has no interest in taking over. And in the case of education, we already see this in some places, where the building is still public, but the administration is private and this is more costly and does not lower costs”, explains the teacher.

Education is another worrying area for professionals in the state and municipality who have accumulated, respectively, eight and three years without salary adjustment/ Photo: Divulgação/Government of Rio

Read more: Find out what changes in the lives of public servants and the population if PEC 32 is approved

Quiroga also highlights that a delicate point is the administrative reform combined with the reform of secondary education. According to her, there may be damage to the process of training students, in addition to weakening the condition of public school teachers.

“There will be no public vacancy available in any training course such as in the technological, human or biomedical areas. In fact, these reforms marry and complete. The concern is whether the current positions will become positions in extinction, because there will no longer be public servants in our format, the tendency is that the professionals who are in these positions will become more and more fragile”, he details.

Unions, popular movements and associations of public servants are denouncing the impacts of administrative reform through the “#VaiPiorar” campaign, which seeks to make society as a whole aware of the importance of public service for the delivery of rights to the entire population. 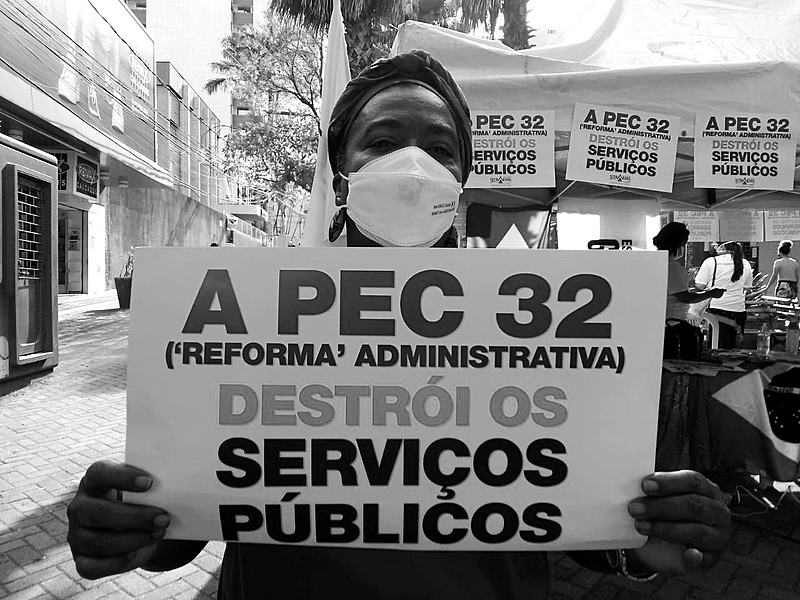 Unions, popular movements and associations of public servants are denouncing the impacts of administrative reform/Reproduction

On the campaign’s website, in addition to complete material about the impact of the proposal, it is possible to pressure parliamentarians against PEC 32. According to Sueth, other initiatives are also underway in Rio.

“In addition, we work through FOSPERJ with parliamentarians, municipal, state and federal. The Mixed Parliamentary Front of Rio de Janeiro in Defense of Public Service was created to amplify the discussion in the legislature and FOSPERJ also has the #Vcprecisasaber campaign, which has the same objective of valuing the servants of Rio”, he explains.