Venezuela’s National Dialogue Table begins to show results. A week after signing the first partial agreements between the government and the opposition in Mexico, Caracas is closer to accessing US$ 5.1 billion (about R$ 25 billion) in working capital from the International Monetary Fund (IMF). The funds are part of the largest financial injection in the history of the IMF, announced in August, as a way to reactivate the economy from the effects of the pandemic.

The amount is distributed according to the quota that each member country contributes to the IMF and does not imply a refund or any type of interest charge. The capital was released as of August 23, with the United States being the main beneficiaries, however, in the case of Venezuela, the amount only appeared in the Central Bank’s balance sheets as of September and its use by Caracas is still uncertain.

“I think this demonstrates how much the US controls the IMF. Venezuela still does not have access to these funds, but it appears that it will be a priority in these negotiations. Let’s see what happens, but basically, [Nicolás] Maduro and the opposition can decide what they want, in the end, the United States has to agree and tell the IMF that it can release these special funds”, emphasizes researcher at the Center for Economic and Political Research Alexander Main.

Everything indicates that the delay in releasing funds to the Central Bank of Venezuela (BCV) is related to the supposed “dual power” between President Nicolás Maduro and the opponent Juan Guaidó. However, one of the points of the Dialogue Table’s memorandum of understanding is the recognition of Maduro’s legitimacy, overthrowing the parallel government of Guaidó.

The text cites the beginning of negotiations between the Venezuelan government and opposition and points out that Donald Trump’s “maximum pressure” policy was a failure, which caused damage to “US businesses”. The US Chamber of Commerce also emphasizes that it is willing to help Biden devise a new policy to defeat the Maduro government, without affecting the interests of US companies in Venezuelan territory.

In six years of blockade, 192 people were sanctioned, 150 Venezuelan companies, ten state-owned and the rest private, 69 vessels and 58 aircraft, generating an estimated loss of US$ 130 billion (R$ 680 billion).

In 2017, the White House began applying unilateral coercive measures against Petróleos de Venezuela (Pdsva), the country’s state oil company. As early as 2019, Trump imposed a total blockade, suspending purchases of Venezuelan oil. For Pdvsa, the impact was a 99% reduction in its revenue.

“Trump promised energy companies that the sanctions would work very quickly and within a short time there would be a political transition thanks to the sanctions, and from this moment on, entrepreneurs would have a great opportunity to invest in Venezuela and expand their operations in the country”, he says. Maine.

Exxon Mobil and Chevron are two of the US oil giants that had their operations in Venezuela nearly paralyzed after 2019.

Read more: Venezuela presents new report on the impacts of the economic blockade

The US was Venezuela’s main economic partner, and in addition to buying oil it also provided infrastructure and technology pieces for the local industry.

“About 48% of our oil production was destined for the United States. So it’s a mathematical question. What else do you need, where do you get it? Where there is more offer. What has the greatest demand will look for where the greatest offer is. Until now it has done this very badly, disrespecting our Constitution. We will see how it goes now, hopefully respecting our sovereignty”, analyzes the actuary and director of the Central Bank of Venezuela (BCV), Yosmer Arellán.

Arellán did not offer the interview as BCV’s official spokesperson, his statements do not represent the Bank’s views.

Precisely because of the close trade relationship, the United States holds around 70% of Venezuela’s external debt, estimated at US$ 140 billion (R$ 740 billion).

“They realized that if the blockade goes ahead, there could be a debt forgiveness and these gringo compadres will be left without their capital and nothing. US creditors, who now claim to be victims, have up to US$ 900 million (R$ 4.7 billion) in debt securities”, argues Arellán. 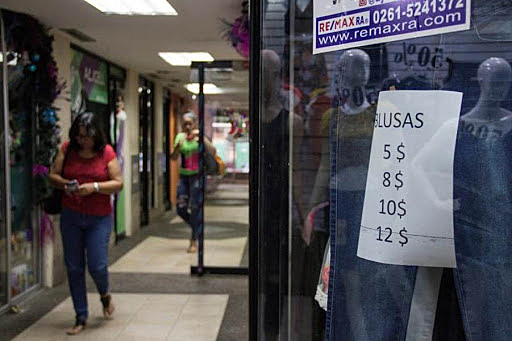 Venezuelan traders prefer to announce the price of goods in dollars since the end of 2019. / Telesur

For the researcher at the Center for Economic and Policy Research, economic recovery involves retaking control of Citgo – the largest Venezuelan public company abroad, responsible for about 25% of oil refining in the south of the country and one of the main suppliers of oil. fuel for civil aviation.

Find out more: What to conclude about lifting part of the US sanctions against Venezuela

Between 2015 and 2017, Citgo made a profit of around US$2.5 billion (R$10 billion). In total, the PDVSA subsidiary has three refineries in the US (in Texas, Illinois and Louisiana), three refueling points and several gas stations on the US east coast.

Since 2019, the company has been under the management of an employee appointed by Juan Guaidó and is at risk of being sold in a maneuver by the US justice questioned by Venezuela.

The next round of negotiations at the Venezuelan National Dialogue Table will take place from September 24-27 in Mexico City and could mean further changes in the sanctions applied against Caracas.

“It is a question of the logic of the metabolism of American capitalism. It is insatiable and needs to extract raw materials in the strongholds they believe to be their backyard, but which are not. They bet on a strategy and failed, but the need for the metabolism of this capital, of this economy, remains the same. It is not because a president changes that this capitalism in a predatory phase will no longer require what it needs to continue advancing”, argues Arellán.

“I believe it will be a more realistic strategy, which means respecting Venezuela’s constitutional times. This is what is happening with these negotiations”, complements the American Alexander Main.