The institutional crisis generated by the authoritarian robberies of government characters may live new chapters in the coming weeks. Opposition parliamentarians are pressing for Defense Minister Braga Netto to be heard in the National Congress to provide clarification on the alleged threats he would have made to the 2022 elections.

The Psol bench, for example, presented last Friday (23) a request to summon the general to be heard by the plenary of the Chamber of Deputies, which is in recess and returns to work in early August.

Other similar reactions strengthen the chorus in search of institutional initiatives that counterbalance the movements of greater military intervention in the political world. Deputy Rogério Correia (PT-MG), for example, also formalized a request for the minister to be summoned to speak to the Legislature, specifically to the Chamber’s Committee on Labor and Public Administration.

:: Of the 185 deputies who defend military personnel outside the government, only one is against impeachment ::

On another front, deputy Túlio Gadelha (PDT-PE) asked Rodrigo Pacheco (DEM-MG) to convene the Representative Committee of Congress to investigate the alleged statements by Braga Netto. The collegiate, formed by senators and deputies, operates during parliamentary recesses and has among its attributions the inspection and control of the acts of the Executive Power.

It is not yet known how much each of these initiatives will prosper, but the fact is that Braga Netto’s recent statements have become a catalyst for the institutional crisis that is currently moving behind the scenes in Brasília and provoked reactions not only from the opposition, but from traditional politicians from the liberal right.

Armed Forces hold the power of arms and barracks, which is why the political world fears the advance of the military over civilian positions / Fernando Frazão/Agência Brasil

The minister, in fact, already had a date set to go to Congress – by invitation, not by summons – on August 17, when he must explain about a note from the Ministry of Defense that attacked the work of Covid’s CPI .

Now, he may have to clarify the supposed threat to next year’s election. According to a newspaper report The State of São Paulo published on Thursday (22), Braga would have sent, on July 8, a message to the president of the Chamber, Arthur Lira (PP-AL), warning him that the eventual rejection of the printed and auditable vote would lead the country to a scenario without election in 2022.

The agenda is currently being discussed in the Chamber through a proposal for a constitutional amendment and has become another point of arm wrestling between pocket members and opponents. In an interview given to the press on the same date, the minister denied the vehicle’s complaint. On the same occasion, he stated that the discussion about the printed vote would be “legitimate”.

The demonstration left a trail of concern that reaches from the opposition camp to “central” actors, who now observe in a greater state of alert the interventions of the Pocketnarist military in the political field.

With the Armed Forces holding the power of arms and controlling the barracks, the general understanding is that it would be necessary to create limits that leave uniforms out of political decisions, something that the Bolsonaro government has pushed to the limit. The administration has been marked, since the beginning, by the pulverized presence of military personnel, including in some high-ranking posts.

The study “The militarization of public administration in Brazil: a project of nation or a project of power?”, for example, by political scientist William Nozaki, recorded the existence of more than 6,000 members of the Armed Forces occupying civilian positions in 2020. In 2019 , there were 3,515, while the year 2018 had 2,765 servers with this profile in such functions. The escalation was accompanied by different authoritarian nods alluding to the military dictatorship, support for anti-democratic acts, among other extremist actions. Now, the threat of not carrying out the 2022 election hangs over the country.

For the advisor of the Civic Space Program of the NGO Artigo 19, Manoel Alves, the constant authoritarian gestures of actors in the Bolsonaro government need greater confrontation by Brazilian institutions.

The president of the Senate, Rodrigo Pacheco, said, after the publication of the article in the newspaper The State of São Paulo, that the holding of the elections “is not up for discussion” and that this would be “non-negotiable”. Lira, on the other hand, denied the alleged threat attributed to Braga Netto and declared that the 2022 election will normally take place based on the “popular, secret and sovereign vote”.

Manoel Alves sees as “quite timid” the reaction of the command of the legislative houses and defends more energetic actions, given the extensive meaning of this type of initiative.

“We know that there is a militarized, radicalized or police base that sees in Braga Netto’s speeches some kind of hope. So the answers [das instituições] it’s not just for him or for the government, but also for society, both for us, who are scared by this type of placement, and for that more radicalized fraction, which sees this as an opportunity to see a better Brazil, in their parameters ”. 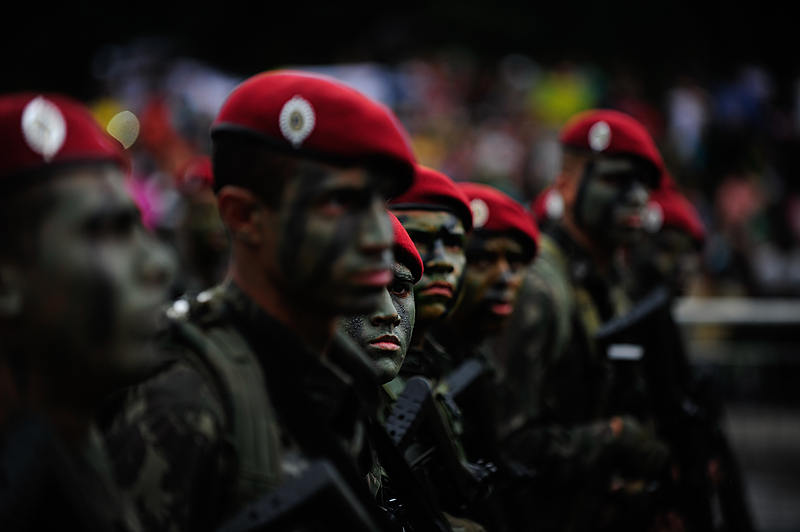 The presence of military personnel in civilian positions jumped from 3,515 to 6,157 between 2019 and 2020, according to a study by political scientist William Nozaki / Fernando Frazão / Agência Brasil

A similar position is held by the president of the group Tortura Never Mais of São Paulo, lawyer Ariel de Castro Alves, for whom the justice system could also give more incisive answers to the episode involving Braga Netto.

Deputies Bohn Gass (PT-RS) and Paulo Teixeira (PT-SP), for example, filed a criminal report last week asking that the conduct of Braga Netto and the commission of possible crimes provided for in the Security Law be investigated National.

The toucan Alexandre Frota (SP) asked the Supreme Court (STF) to immediately open a criminal action against the minister for a crime of responsibility, while deputy Natália Bonavides (PT-RN) requested that the Attorney General’s Office ( PGR) is demanded to open an investigation to investigate possible crimes for which the general is responsible.

“There should be pressure, an action by the PGR itself to immediately remove him from office because he is violating the Constitution and democracy, because what is being generated is a situation of impunity. They are always compromising, making agreements, collusions, and these situations are repeated all the time”, criticizes Castro Alves.

Looking back, the Brazilian scene saw the emergence of different other manifestations during the Bolsonaro government, which signal a closer approximation of the Armed Forces with the political stage. Among them, for example, the infamous tweet published in 2018 by General Eduardo Villas Bôas, then commander of the Army, on the eve of the trial of a habeas corpus of former president Lula (PT) in the STF.

I assure the Nation that the Brazilian Army believes it shares the yearning of all citizens for the good of repudiation of impunity and respect for the Constitution, social peace and Democracy, as well as being attentive to its institutional missions.

In affirming that he repudiated “impunity”, in a nod of pressure to the Court to condemn the PT, the general said in the post that the Army would be “attentive to its institutional missions”. The message caused a stir behind the scenes in Brasília as it was identified as a threat of an eventual military coup.

Since then, President Jair Bolsonaro (no party) and allies have been involved in other situations that have generated controversy, as is the case of public support for anti-democratic demonstrations, which were especially aimed at Congress and the Supreme Court. Now, the political game is in turmoil amidst the demonstrations by Braga Netto, the most recent encourager of the institutional crisis. The conflict gains more muscle with each new statement by the general.

“If we don’t want to admit that we are in a regime under the control of the military, that has to be punished. It is unreasonable for a public official, such as the Defense Minister, to threaten the electoral process,” criticizes Professor Luis Felipe Miguel, from the Political Science Institute of the University of Brasília (Ipol/UnB).

“I even believe that at this moment these threats are more bravado than a coup being prepared, but that doesn’t matter because the intention to intimidate Congress is the same”, he says. 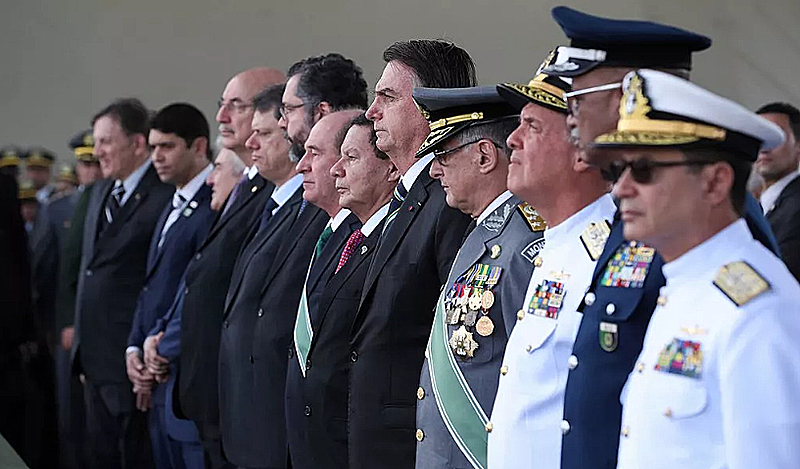 Marked by the advance of the military in the political arena, the Bolsonaro government has more than 6,000 military personnel in civilian positions, according to a study / Marcos Côrrea/PR

For the researcher, ideally, the existence of a military that stirs up institutional conflicts requires immediate energetic actions. “If there is a suspicion that he made this threat, he cannot be in the position of minister. And, once the suspicion is confirmed, he should evidently be removed from the Armed Forces and imprisoned for conspiring against the democratic regime”, defends Miguel.

For Manoel Alves, in spite of the developments that may still arise in the political chessboard, the authoritarian adventures that have taken place so far in these years of Bolsonaro’s administration left, in the view of the advisor of the Article 19 Civic Space Program, a great loss rides for the country.

“There is a whole trail. A militarized government in itself starts from the beginning with a problem. Today we are going to the streets with more fear. In some places, tensioning and repressing can put an end to demonstrations. More than a concrete political field, it has a subjective political field where hard marks have already been left behind. This is something that will take us a long time.”