September 7 marks a new phase in the political struggle, with the dispute intensifying and street demonstrations gaining centrality. On Brazil’s Independence Day, there were mobilizations by the neo-fascist current that supports President Jair Bolsonaro and by the progressive forces, led by the Brasil Popular and Povo Sem Fedo fronts, in conjunction with the social pastorals of the Grito dos Excluídos.

On Sunday, September 12th, there will be another protest, called by a fringe of the “third way”, the MBL and Vem Pra Rua.

Bolsonaro has made an extreme effort and has been successful in giving a show of support for his government, which is experiencing a slow and permanent decline in popularity. The government is going through an adverse scenario, evolving into a situation of isolation and raising anti-democratic flags. Even so, a considerable contingent of people participated in the Pocketnarist demonstrations, at a time of deep national crisis.

A cold assessment of the Pocketnarist acts needs to consider the situation in the country, the political conditions of the government, the policy of alliances and the ideas that moved the protesters. Also, set aside previous expectations for mobilization on one side or the other to decree that they were the greatest acts in history or that they simply “brought a rat”.

It is necessary to recognize that the acts in Brasília, São Paulo and Rio de Janeiro were great. Thousands took to the streets to defend a mandate that is at the center of the institutional crisis (harsted by the CPI on the Pandemic, by STF inquiries and TSE investigations), suffer accusations of corruption, failed to implement measures to reverse the economic situation, which punishes the poorer workers and generates distrust in business sectors.

: Read also: No violence and force for a coup, September 7 breaks Bolsonaro’s isolation in SP and DF

The protests provided images that will be used by Bolsonaro, in the short term, as a kind of safe-conduct to maintain his line of fraying institutions, which are unable to put a stop to Bolsonaro’s threats and the blackmail imposed by the alignment of the Armed Forces to the president.

For the medium term, Bolsonaro has prepared the ground for new confrontations to come, by giving mass expression to the maneuver to undermine the credibility of the democratic regime in Brazil, both creating a “vaccine” for an eventual response from institutions and to react to the electoral process and the result of the polls next year, with Bolsonaro embodying a messianic discourse on “prison, death or victory”.

Therefore, in his speeches, he attacked the STF, the most unfavorable arena for his intentions, especially Minister Alexandre de Moraes. The rapporteur of the inquiry of fake news it has harassed the president and his supporters who are part of the structure of spreading lies to attack the institutions. The president threatened to fail to comply with the STF’s decisions and returned to defending the printed vote, the trigger for accusing electoral fraud. Next year, Moraes will assume the presidency of the TSE, the body responsible for the elections.

In São Paulo, protesters attack STF ministers and call for military intervention. The anti-democratic agendas are prosecuted at the Supreme Court, which investigates the leaders of the demonstrations / Photo: Igor Carvalho

In the long term, the consolidation of a neo-fascist current in society with political expression, a higher level of organization and a mass dimension is advancing. Thus, the neo-fascist policy of the most active, intransigent and ideologically cohesive minority is radicalized and makes a radical counterpoint to institutions that are going through a deep crisis of demoralization, which has dragged on like an open wound since 2013, which has been sharpened by the legitimacy they have given to the 2016 impeachment coup.

The operation of the Pocketnarist militias on social networks calls attention, before the acts, to broadcast videos and photos of buses traveling to Brasília or São Paulo, as well as truck drivers on the roads to create the mood. On Monday night, images of the “invasion” of the Esplanade of Ministries, information about invasions and attacks on Itamaraty, Congress and the Supreme Court and messages of apprehension circulated at high speed, favoring the mobilization of the Pocketinarians and disseminating the fear to participate in the demonstrations against the president.

The furor in the mobilization process for the Pocketnarist acts had a reflex effect on the demonstrations of the Grito dos Excluídos in conjunction with the Fora Bolsonaro campaign. On the one hand, the president encouraged their demonstrations and exalted the participation of their supporters, including police officers, ruralists and religious fundamentalists. On the other hand, the unity of the progressive forces weakened, the doubts about the relevance of keeping the acts on the same day grew and the fear of being on the streets spread, especially in São Paulo and Brasília, but not only.

Regarding the decision to maintain the national journey, the responsibility for a process of national organization of the demonstrations and the commitment to the partners of the social pastorals of the Grito dos Excluídos weighed heavily. As well as the conviction that it was necessary to dispute the streets, raise the flags and resist, even more with the prospect that this intensification will persist until the end of 2022.

Acts were organized in more than 200 municipalities, in all states and in the Federal District, bringing together around 300 thousand people. With the exception of Brasilia, Rio de Janeiro and São Paulo, the acts of the progressive forces were on the same level as the Pocketnaristas. In São Paulo, central to the controversy, the protest in Vale do Anhangabaú brought together more than 50 thousand people, even in an adverse scenario.

The demonstrations, this time, had a greater weight of the militancy of the organizations, both for the sense of responsibility with the political situation, as well as for the advance of vaccination and containment of the numbers of the pandemic.

The fringes of the progressive middle sectors and student youth, which thickened the latest acts, had a lower adhesion, especially due to fear and also the disagreement with the maintenance of the date. Part of these segments were expressed in pots, held in the late morning and early evening.

Faced with the mobilization of the Pocketnist hordes, the demonstrations were unable to work mass lines that could mobilize other sectors, beyond the banner of Fora Bolsonaro. Even the defense of democracy against authoritarian escalation was without force. The defense of an employment and income program as well as sanitary measures to face the pandemic were dispersed, as well as other demands.

It will be necessary to open a debate on the next steps in the struggle and to respond to the Pocketnarist demonstrations. The discussion about the new mass lines must consider the need to put the progressive middle sectors and student youth back into motion. It is still a challenge to promote initiatives that focus on the poorest workers so that they can get involved in the struggle process. 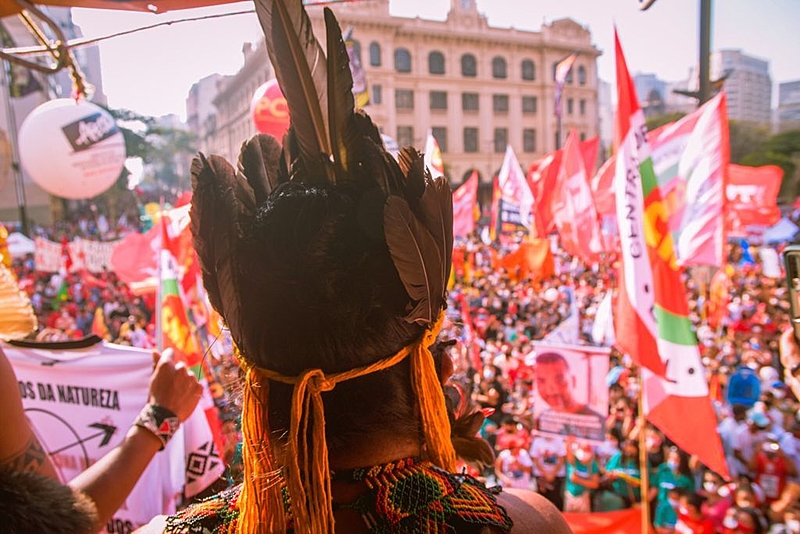 “Fora, Bolsonaro” and Grito dos Excluídos mobilized 200 cities against hunger and for democracy and, in repudiation of coup threats, marked acts that brought together 300,000 people in Brazil and abroad / Photos: Elineudo Meira

The dispute on digital platforms was fierce on open networks. On Twitter, pocketbookism had a large volume of posts, but it only reverberated among 18% of users who discussed the topic.

On the side of the progressive forces, hashtag #7SForaBolsonaro topped the TTs throughout the day. On Instagram, of the ten posts with the most interactions about “September 7”, the three most popular were against Bolsonaro (Quebrando O Tabu, Lula and Manuela D’ávila. On Facebook, before the acts, the call for the Bolsonaro demonstration had an average of one million interactions/day.

The last chapter of this week’s street dispute will be on Sunday, September 12, when the act called by MBL and Vem Pra Rua takes place, supported by São Paulo governor João Dória, who is trying to build a mass expression for the third way .

It is the first street act in this camp against Bolsonaro and it is still difficult to predict the mobilization capacity of the organizers, who were notable in the protests for the impeachment of President Dilma Rousseff. The strongest statements by the non-Bolsonarist right leaders, putting the president’s impeachment letter on the table, could strengthen this demonstration as a society reaction to Bolsonaro’s authoritarian escalation.