The government of President Jair Bolsonaro (no party) appointed one of the five convicted of killing the Pataxó Indian Galdino Jesus dos Santos, in Brasília, in 1997, to a commissioned position in the Federal Highway Police. Gutemberg Nader de Almeida Júnior, a civil servant who joined the corporation through a public examination in 2016, was awarded in January 2020 with the post at the PRF and remained in the position until December.

In the 11 months he was in the position of deputy head of the Testing, Quality and Implementation Division, he received monthly bonuses of approximately R$ 2 thousand (commissioning is identified by the federal government by the code FCPE 101.2). The earnings were added to his gross salary, of more than R$9 thousand.

The ordinance with the designation of Gutenberg was signed by André Luiz Marçal da Silva, coordinator of Human Resources at the Ministry of Justice and Public Security, then headed by former judge Sérgio Moro. The command of the PRF, at the time, was Adriano Marcos Furtado.

After Moro left the ministry in April 2020, Gutemberg remained in the position for about eight months. In May, with the Ministry of Justice under the leadership of the current attorney general of the Union, André Mendonça, the general direction of the PRF became Eduardo Aggio de Sá.

Ordinance that exempts Gutemberg from the commissioned position, published on December 2, 2020 / Reproduction/Official Gazette

The highway patrolman is one of five convicted of the murder of Galdino, who was brutally burnt while sleeping at a bus stop on W3 Sul, an avenue in an upscale neighborhood in the federal capital. He was the only minor at the crime scene committed in the early hours of April 19, 1997.

Gutemberg was released on September 12, 1997, by decision of the Court of Justice of the Federal District and Territories (TJDFT). In a secret session, the judges exchanged the three-year internment for assisted freedom. Upon reaching the age of majority, the record of the crime committed in adolescence was erased, as determined by Brazilian law.

The other four (Tomás Oliveira de Almeida]Max Rogério Alves, Eron Chaves Oliveira and Antônio Novely Cardoso Vilanova) were sentenced, in 2001, by a popular jury, to 14 years in prison in a closed regime for murder. In 2004, seven years after the case, none of them remained in prison.

::: Read the full record of the case that convicted those responsible for the death of Galdino :::

In their court testimony, the criminals said that the objective was to “scare” Galdino and make a “joke” so that he would get up and run after them. One of the young men told the press that he and his friends thought that Galdino “was a beggar” and therefore committed the crime.

In 2014, Gutemberg was approved in a competition for an agent of the Civil Police of the Federal District. He went through all the steps until he reached the previous life analysis. At that time, Galdino’s death had weight and the candidacy was barred by the corporation. The convict questioned the decision in court and even took the case to the Supreme Court of Justice (STJ), but the determination was maintained.

Gutemberg’s lawyer at the time was the then president of the Brazilian Bar Association in the Federal District (OAB-DF), Ibaneis Rocha. In 2018, he became a politician and was elected to the position of governor of the Federal District, with the support of current president Jair Bolsonaro. 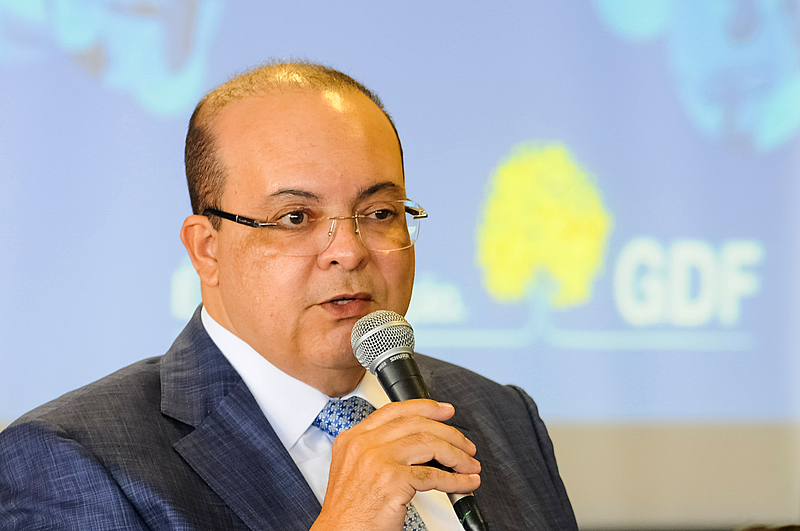 Governor Ibaneis Rocha (MDB) defended Gutemberg in his election to enter the public service; currently, two of the convicts are servants of the Federal District / Paulo Henrique Carvalho/Agência Brasília

Despite the Civil Police’s refusal, Gutemberg insisted on the project of integrating a security force. In 2016, it was approved in a Federal Highway Police competition. After a court dispute over having been barred from analyzing his previous life again, he managed to take office. He has been an agent for the corporation since November of that year. Until the Bolsonaro government, Gutemberg had not received any bonuses or held commissioned positions within the corporation.

O Brazil in fact sought out the Federal Highway Police to ask questions about the promotion of Gutemberg during the year 2020. The corporation did not specify the reasons, but sent the following note (reproduced in full):

“The Gutemberg Nader server was the target of social investigation like any other candidate during the 2016 event. At the time of the social investigation, there was a decision for him to be dismissed from the Professional Training Course – CFP, 2016, due to the facts of general knowledge, that is, the event with Indio Galdino, when he was still a minor. However, he returned to the CFP, concluded and took office as PRF, by virtue of a court decision. Federal. Your remuneration is on the Transparency Portal.”

ALL CONTENTS HAVE PUBLIC OFFICE

In 2001, the four adults who participated in the crime alongside Gutemberg were sentenced to 14 years in prison. In 2002, they received assisted freedom benefit, which was revoked after videos from the Brazilian mail that showed the convicts drinking beer and making out when they were supposed to be working or studying.

In early 2004, the benefit was granted again. In November of the same year, two of them were granted parole. In December, the other two who remained in prison were released from prison for the same benefit. The 14-year sentence was served by the four completely in 2011.

Even after being convicted of a heinous crime (triple-qualified murder), everyone has a negative criminal record. Article 202 of the Criminal Execution Law guarantees confidentiality in case of convictions that have already been served.

“Once the sentence has been served or extinguished, there will not be any news or reference to the conviction on the record, certificates or certificates provided by the police authority or by court assistants, except to instruct a process for the practice of a new criminal offense or other cases provided for by law” , points out the article of the 1984 law.

See where each convict is:

Image shows where the men who killed the Galdino Indian are located / Reproduction: Instituto SocioAmbiental Collection/Facebook/LinkedIn

Gutemberg’s eldest brother, he is one of four sentenced to 14 years in prison for aggravated murder. He is a legislative technician at the Federal Senate, which he joined through a public examination in 2012. The following year, he started to receive, in addition to his salary, an amount for occupying a commissioned position at the House.

Currently, he adds BRL 5,763.32 every month to the gross salary of BRL 21,476.11. Tomás works in the Coordination of Permanent Committees of the Senate and, in 2017, he was assigned to head the cabinet of former senator Ataídes Oliveira, then of the PSDB.

Cousin of Gutemberg and Tomás, he is an agent of the DF Traffic Department (Detran-DF). Receives a salary of R$15,699.20 gross. Graduated in Law from a university in Brasília, he even worked in the profession, but stopped practicing law after a constitutional amendment prohibited the accumulation of functions, in 2014. 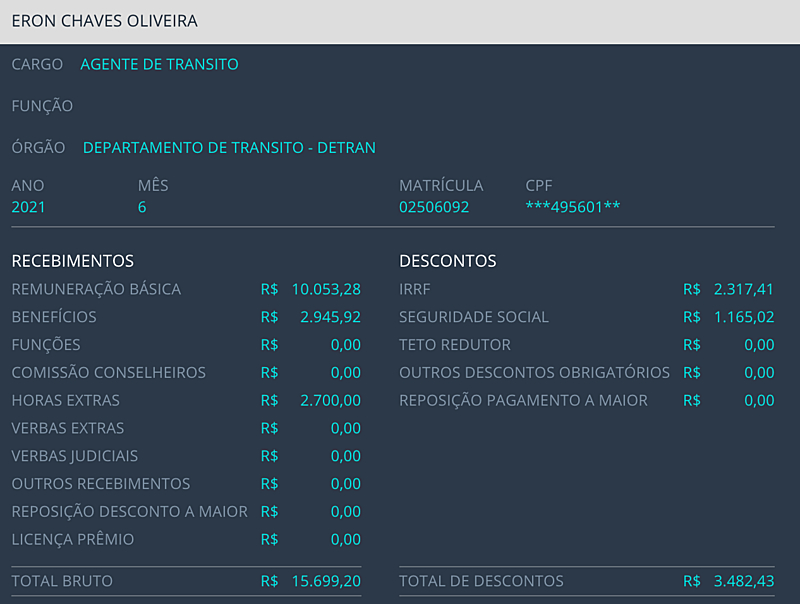 Son of federal judge Novély Vilanova, he graduated in physiotherapy at the University Center of Brasília (UniCeub) and is now a server at the Health Department of the Federal District, based at the Hospital Regional de Santa Maria. Per month, he receives a monthly salary of R$15,196.46 gross. 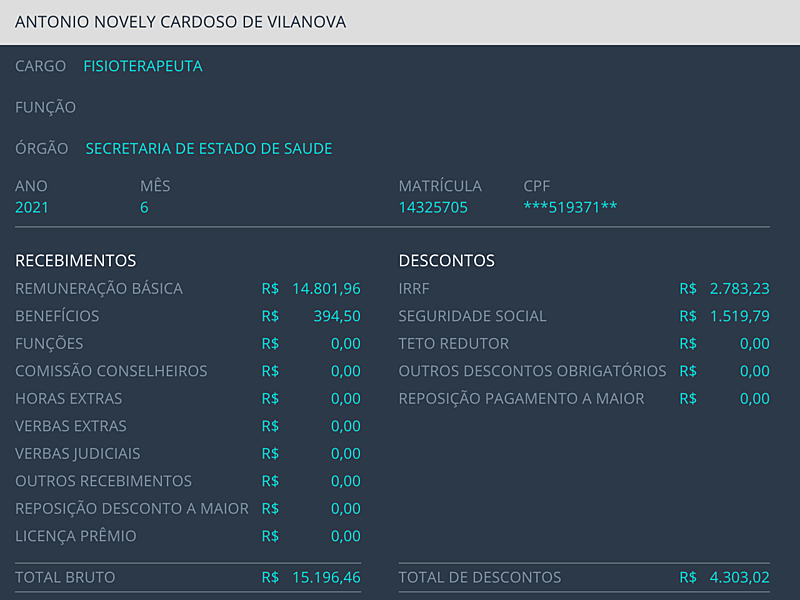 Max Rogério Alves, employee of the Court of Justice of the Federal District and Territories

In October 2017, attorney Max Rogério Alves was appointed to a position at the Court of Justice of the Federal District and Territories (TJDFT), after being approved in a public examination. Since then, after years working in prestigious law firms in Brasilia, he has been working as a judicial analyst at the District Court, where he earns approximately R$ 16,091.40 of gross salary monthly.