President Jair Bolsonaro (no party) sanctioned, with five vetoes, Law 14.197/2021, which establishes crimes against the democratic rule of law and revokes the National Security Law (LSN), created during the military dictatorship. The text was published in the Official Gazette of the Union (DOU) on Thursday (2) and generated criticism from parliamentarians, becoming yet another malaise between the Legislative and the Executive.

The Chief Executive cut, for example, the passage that made the attack on the right to peaceful demonstration a crime, a practice that has proliferated in Brazil in recent years, in the context of conservative advances.

Depending on the seriousness of the action, the text approved by Congress provided for a prison sentence ranging from one to 12 years for anyone trying to prevent, through violence or serious threat, protests of this nature conducted by political parties, popular movements, unions and other groups .

In justifying the veto, Planalto argued that the clause goes against the public interest for what it considers a “difficulty in characterizing what would be a peaceful demonstration”. “It would generate serious legal uncertainty for public agents of the security forces responsible for maintaining order”, says the president.

He also vetoed the article that fixed stricter punishment for military personnel who commit crimes against the democratic rule of law. The rule provided, for example, for the loss of office and patent, but it displeased the president, for whom the passage violates the principle of proportionality by submitting uniforms to a “more onerous situation” than that of other public agents.

Bolsonaro’s vetoes come in the context in which the head of the Executive intensifies the coup-like gestures and encourages the conservative population to participate in the anti-democratic protests called for the 7th of September. The scenario has as a backdrop an institutional crisis between the Executive and Judiciary Powers created and fed by the president himself.

For this reason, too, the opposition sees the veto as an attempt to shield ultra-conservative military personnel who have aligned themselves with the president in the bravado against institutions, the main theme of the September 7 protests.

“veto [isso] it really shows what he wants and what he is, that he is a defender of the dictatorship, of the authoritarian State, and has no appreciation and commitment to democracy”, criticizes deputy João Daniel (PT-SE), in an interview with Brazil in fact.

“We need to face this debate very clearly. We cannot retreat, there is no middle ground, because either we have respect for the democratic State and institutions or we will have constant threats, with the risk of a return of torturers and a dictatorship”, concludes the congressman.

Bolsonaro also cut from Law 14.197/2021 the section that provides for imprisonment of one to five years and a fine for anyone who promotes or finances a campaign or initiative to disseminate fake news that compromises the electoral process.

During the course of the bill in Congress, this particular item was rejected by experts from civil society who pointed out risks of manipulation of the rule in order to make room for the possible criminalization of legitimate forms of expression in the internet environment. Parliamentarians, however, understand that Bolsonaro vetoed that point of the law for other reasons.

“There is an ongoing broad and systematic model for disseminating fake news which, together with the resurgence of authoritarianism, has serious consequences for Brazilian democracy. Bolsonaro himself is being investigated in the fake news investigation”, recalls Talíria Petrone (RJ), the leader of the Psol bench in the Chamber, mentioning the investigation that is currently taking place in the Federal Supreme Court (STF).

“With these vetoes, he tries to shield the digital militias that attack democracy and the electoral process. The National Congress has to overturn these vetoes”, he urges the opposition.

The section of the law that criminalizes the promotion of fake news was approved by the Legislature also in the wake of concerns related to the different threats that Bolsonaro has made, in recent times, to the 2022 elections. that will not accept a possible negative result in the polls.

The issue is intertwined with fears of a possible new wave of fake news in October 2022. The 2018 campaign, for example, raised a series of suspicions — and an ongoing investigation — about the existence of a network for the dissemination of false content and defamation on digital platforms.

“We’ve already seen what this type of communication can do. Bolsonaro has used and continues to use this strategy a lot of disseminating false information on a wide range of topics. The president’s veto is practically a confession of the importance that this practice has for his political survival. It is up to Congress to examine this veto and overthrow it,” he told the Brazil in fact Senate minority leader Jean Paul Prates (PT-RN).

The president of the Congress, Senator Rodrigo Pacheco (DEM-MG), also spoke about the cuts: “Obviously, what was approved in the Senate is what we defend that it be maintained. We respect the President of the Republic’s vetoes and this assessment will be made in a session of the National Congress to define whether the veto is maintained or the veto is overturned,” he told the press.

In the official justification of the cut in the text related to fake news, Bolsonaro argued that the approved project would not make clear “which conduct would be the object of criminalization, if the conduct of the one who generated the news or the one who shared it, as well as raising doubts whether the crime would be continuous or permanent, or even if there would be a ‘court of truth’ to define what would come to be understood as untrue to the point of constituting a punishable crime”.

The president also vetoed, in the approved law, the passage that provided that acronyms with representation in Congress could file suit on crimes against institutions in the electoral process when the Public Ministry does not do so within the legal deadline. Putting it simply, the veto limits the questioning in court.

Cuts made by the chief executive must be voted on by Congress within 30 days. The new rules that were left in the sanctioned text take effect in 90 days. Of the ten crimes against the democratic rule of law that were approved by the Legislature, eight remain in Law 14.197/2021 after Bolsonaro’s scissors. 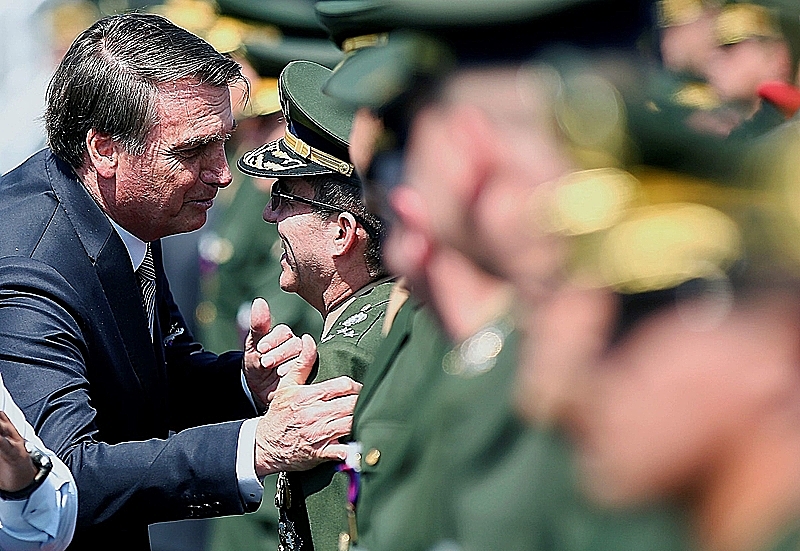 Former army captain, Bolsonaro has a known and close relationship with the military, who have different agents orbiting within the government / Sérgio Lima/AFP

They are: attack on sovereignty, attack on national integrity, espionage, violent abolition of the democratic rule of law, coup d’état, interruption of the electoral process, political violence and sabotage. Such conduct was included in the Penal Code as a crime.

Law 14.197/2021 is the result of a wide-ranging questioning process involving the National Security Law (LSN), revoked by the new standard. Considered an authoritarian resource, the LSN had been used by the Bolsonaro government to frame opponents of the president and the administration.

The concerns of the political world with the ultra-conservative escalation that the country is experiencing led Congress to approve the proposal that gave rise to Law 14.197/2021, which had been in the Legislative since 1991. The text was approved in May by the plenary of the Chamber of Deputies and finally approved by the Senate on August 10, after a concerted effort that brought together different political forces.