This Friday (27), the Peruvian Congress granted the vote of confidence to Pedro Castillo’s cabinet of ministers. With 73 votes in favor and 50 against, the head of state will be able to continue his administration without further changes.

The head of state thanked the congressmen. “The search for consensus will allow us to govern with the people and for the development of public policies of a social nature.”

Less than a month after taking office, Prime Minister Guido Bellido requested the resignation of Chancellor Héctor Béjar amid an opposition campaign promoted by the media and the Armed Forces. Béjar has been criticized for associating the Peruvian Navy with terrorist acts of the 1970s.

Now, the right-wing caucus has assured that it will demand that each minister present his plan to the corresponding commissions in Congress. The opposition has also already prepared a census motion file against seven ministers appointed by Castillo.

The Congress of the Republic of Peru is made up of 130 congressmen, divided into 11 benches with a majority opposition. 37 being from the governing Peru Free Party; 24 from Keiko Fujimori’s party, Popular Force; 16 from the centre-right Popular Action party; 15 from the Alliance for Progress; 13 of the Popular Renewal party; 7 of Advances Country; 5 of Juntos Pelo Peru, Somos Peru and Podemos Peru; and 3 from the Morado Party, by Francisco Sagasti.

It took more than 10 hours of debate in the legislature until the government obtained a simple majority. In front of the seat of the Legislative Branch, supporters of the Free Peru Party have been on duty since last Thursday (26) to pressure congressmen.

For nearly three hours, Prime Minister Guido Belli laid out the government’s plan to parliamentarians. He highlighted that health will be a priority to defeat the pandemic and reactivate the economy.

Health will receive 2.8 billion soles, around R$ 3.5 billion, to immunize 50% of the population against covid-19 by the end of September. So far, around 27% of the Peruvian population has received at least one dose.

The prime minister pointed out that on July 28, 13 million immunizations had been administered, while on August 27 the figure was 17 million doses applied. To increase vaccination, he said that the Peruvian Foreign Ministry will have as its first task to seek new contracts with different suppliers of immunization agents.

:: What Pedro Castillo and his party stand for ::

The new governors also intend to create a single public health system in the country.

The prime minister also promised to create a tax on mining extraction, increase public funds for social security and
salaries of teachers and health workers. 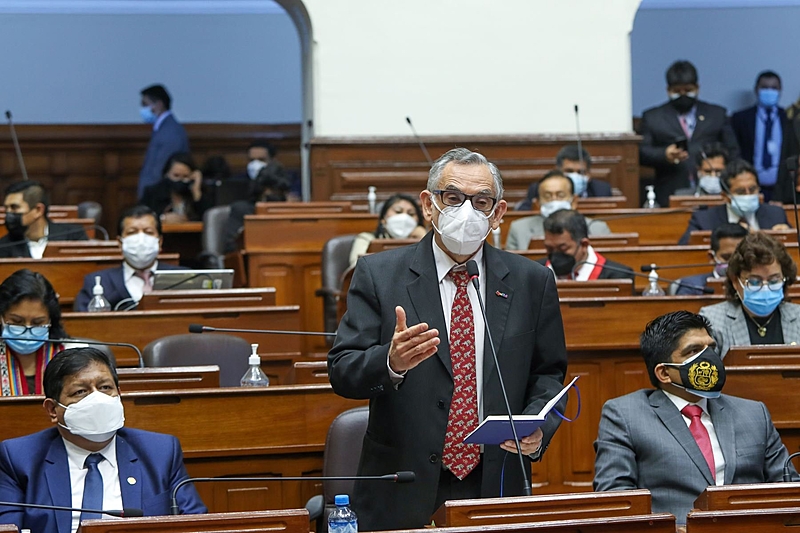 Guido Bellido was criticized by opponents for starting his speech in Quechua and Aymara, languages ​​of the two largest indigenous nations in the country. The prime minister is characterized by the mainstream media as a member of a supposed “radical wing” of the Free Peru party.

“The historic mission of this government is to carry out structural changes in an orderly, democratic and peaceful manner,” he declared.

Throughout the session, deputies from the far-right parties Força Popular, Renovação Popular and Avança Pais criticized the cabinet formation, suggesting that the new president should implement “communism” and defended the “no”.

While more moderate benches, such as the Morado Party, of former president Francisco Sagasti, defended the “yes” vote in the name of the country’s political stability. The deputies of Juntos pelo Peru, from the governing base, also reiterated that the government did not even talk about the proposed constitutional reform seeking to obtain consensus.

The secretary general of Free Peru, Vadelmar Cerrón, highlighted the importance of unity for the nation. “It is time for us to reflect and begin to join forces before pointing out the differences. The Motherland needs us”, he defended.

Last week, Alba Movimentos denounced that Peru was under threat of a coup and the government should be defended by the people.