The Constitutional Convention of Chile, which carries the task of drafting a new Magna Carta by October 2022, completes a month this Wednesday (4).

Among the urgent topics for debate at the Constituent Assembly are the use of natural resources, the impacts of mining, access to public services and policies that promote gender equality.

“The first demand is to deprivatize natural resources, starting with water. Chile is the only country that establishes in its constitution that access to the resource is a private right. This is an aberration, even more in a context of environmental crisis”, assures the constituent for the Ñuble region, César Uribe.

In addition to making water a public and universal good, he advocates establishing priorities for the destination of its use, starting with human consumption, household consumption, basic sanitation and then for economic activities such as agribusiness and mining.

In Chile, there are so-called “sacrifice zones”, in which the population lives under contamination from mining in the air, soil and water.

Dayana González, elected by the People’s List for the Tocopilla region, in the north of the country, reports that the majority of the population ends up paying dearly for contaminated water.

“The Chilean north is brutally affected by extractivism. In the desert, the soil is very rich, and it is exploited by companies that are not even from here. While using fresh water for mining, we take water from a desalination plant installed 300m from a thermoelectric plant. In other words, they use this water, return it to the sea and then it is treated and sent for our consumption”, he says.

The Mapuche people are the majority among the 12.8% of the indigenous population of Chile and had the right to 7 seats in the Constitutional Convention / Web of Peoples

Another historic demand that the Convention will seek to meet is the recognition of the original peoples that make up the country. About 12.8% of the Chilean population is indigenous and most of its territory, the so-called wallmap, is militarized.

Mapuche leaders are persecuted by state security forces and indigenous languages ​​are not recognized as official languages.

Therefore, one of the proposals presented by the indigenous caucus is the replacement of the country’s current flag.

“There is hope that this constitution recognizes the common good, that we create an ecological Charter with restorative justice that we need to be able to repair the damage done to our territories,” says González.

The proposal elaborated by the Convention in the period 2021-2022 must be submitted to another popular consultation. 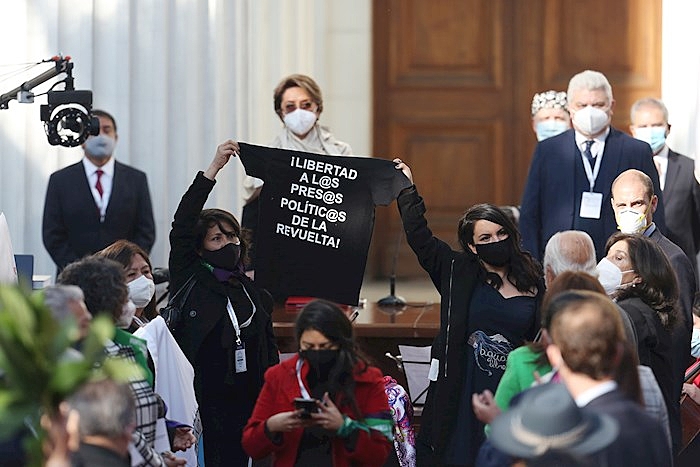 During the first session of the constitutional convention, social movements staged a protest in front of Congress to celebrate the historic day and demand freedom for political prisoners / Telesur

The Convention uses the plenary of the Chilean Congress for its debates and should receive technical support from a committee linked to the country’s presidency. However, on the first day, the session was delayed for hours due to the lack of space to receive the group.

“The Convention started from scratch, with no structure, operating norm or rules in place. The entire process, therefore, was more difficult than arriving at a congress that had already had a dynamic for years and assuming this dynamic. Evidently, barriers were placed on the functioning of the Convention. And I think there is a government intention,” says Uribe, who is also an architect and environmental activist.

During the opening of the works, social movements held a demonstration in front of the Parliament to celebrate the historic date. The peaceful act was repressed by the Chilean military police, the Carabineros. After the episode, the executive secretary of the presidency, Francisco Encina, was replaced as advisor to the new organization.

The first declaration issued by the Constituent Assembly, on July 30, was in defense of the freedom of Mapuche political prisoners and those detained during the demonstrations in October 2019, calling for constitutional reform.

All internal commissions, as well as the board of directors, follow the gender parity rule, established in the Convention itself.

The election of the members of the Assembly guaranteed a large majority of representatives from the progressive camp: 27 for the people’s list, another 7 independent and indigenous candidates, 28 for the Aprovo Dignidade list, 25 for the Aprovo/Frente Ampla list, 15 indigenous representatives, 11 for the Nova list Constitution and 37 for the right-wing slate Let’s go for Chile.

The diverse composition was represented at the table that will direct the organization, with Mapuche Elisa Loncón, in the presidency, and Jaime Bassa (I approve Dignity) as first vice-president; complete the table Rodrigo Álvarez (Let’s go through Chile); Lorena Céspedes (independent); Pedro Muñoz (Broad Front); Elisa Giustinianovich (I approve of Dignity).

The sessions are daily and take place in person and online due to the restrictions generated by the covid-19 pandemic. The constituents’ proposal would be to hold events or open sessions in other regions of the country, but they point out the lack of funds for travel.

The Constitutional Convention has a budget equivalent to 20% of the funds reserved for the Chamber of Deputies, which has the same number of parliamentarians – 155 in total. 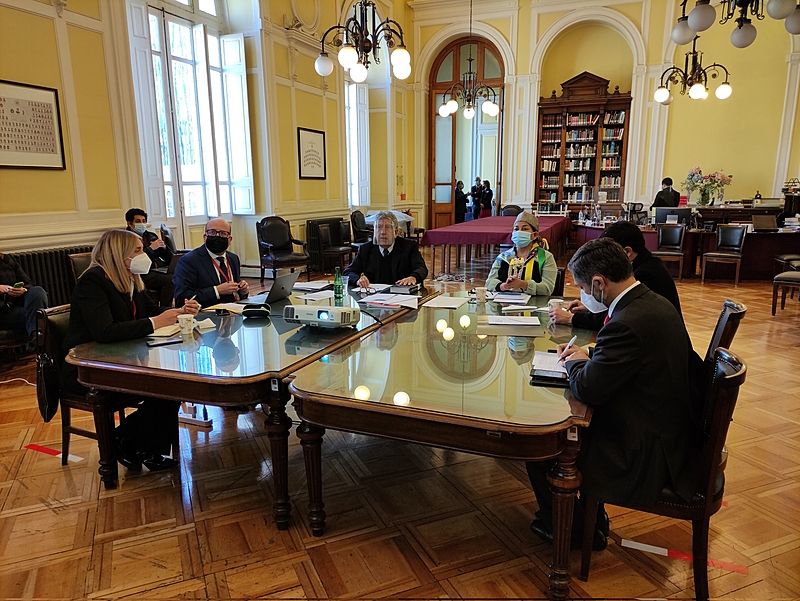 For the first time in the country’s history, an indigenous woman, the Mapuche Elisa Loncón, presides over a constituent body / Constitutional Convention

Despite the advances, the traditional Chilean press published a series of articles in the last month questioning the work capacity of the constituents.

The doubts were also raised by members of the right, who claim that the Convention seeks to cut across the other powers constituted in Chile.

Dayana González says that independent constituents are already discussing alternatives to deal with the media campaign against it. “Here those who have the means are those who ruled his entire life”, he denounces.

Uribe agrees and says that “there is an intention of the Chilean economic class for this process to fail”.

In other words, according to the independents, the Chilean right, which campaigned for a “no” in the constitutional referendum, is now trying to boycott the convention from within.

A preview of the elections

After Chileans opted for a majority of independents in both the election of constituents and the election of governors, discrediting this sector of society would be strategic for the elections in November this year.

:: Article | Winds of hope coming out of the Andes: the defeat of the Chilean right ::

As they engage in debates, the slates are also preparing for November’s parliamentary and presidential elections. President Sebastián Piñera ends his term with a record of 72% disapproval, according to an opinion poll by the Strategic Center for Geopolitics (Celag).

Gabriel Boric (I approve of Dignity) will be the candidate on the left and Sebastián Sichel (Chile Vamos) is the name already chosen on the right. Still, other candidates can apply.

For part of the Convention’s constituents, this electoral process in November and the next year of work on the proposed new Magna Carta will be decisive for the possibility of abandoning the current neoliberal economic model in the country. “We need an economic model that projects us more life. This is the moment that we must put all our strength to advance”, guarantees Dayana González.