Covid-19 has infected 218.5 million people and caused 4.5 million deaths worldwide, yet the World Health Organization (WHO) warns that the pandemic is far from over. Despite the development of vaccines and greater scientific knowledge about the sars-cov2 virus, the emergence of new variants makes it difficult to establish a prediction of the end of the global health crisis.

In the last week of August, 4.4 million new cases and 67,000 deaths were recorded, maintaining a downward trend in contagions and deaths. However, the concentration of immunization agents in rich countries does not help to curb contagions.

Since the beginning of the health emergency, the WHO defends the equitable distribution of vaccines, but the truth is that rich countries concentrate 70% of all immunization products produced in the world. So far, 5.2 billion doses have been applied across the planet, around 27% of the global population has been immunized, but some nations have not yet had access to any dose.

The United States concentrates the largest amount of formulas, with over 200 million doses on the market for 2022, and has 51.9% of the population completely immunized. In the first half of the year, US authorities had to discard 60 million doses of Pfizer’s formula that would expire and had not been applied.

:: Why does Brazilian health depend so much on imports? ::

Since July, the country has faced a fourth wave of infections, in which children and adolescents are the most affected, with an average of 300 infected a day, according to the Centers for Disease Control and Prevention (CDC).

The US also continues to lead the world ranking of covid-19, with 39.3 million confirmed cases and 638,000 deceased. In second place is Brazil, with 20.8 million cases, more than 518,000 deceased and about 30% of the population immunized.

“Rich countries get immunized and there is no immunization for peripheral countries does create a problem of lack of control. Something that the WHO has warned about from the beginning. As long as there is no control of the pandemic in all countries, there will not be any in rich countries either”, says doctor and public health lawyer Daniel Dourado.

In Europe the situation is no different. The continent is experiencing the fourth wave of contagion since July, which coincides with the summer season and the relaxation of social isolation to encourage tourism. Although the average immunization rate exceeds 50% of the population, among the ten most affected countries in the world, six are European.

“The circulation of the virus remains very high, which gives conditions for the emergence of new variants. In Europe, this is what is happening with the introduction of a new highly contagious variant, such as delta”, analyzes Mercedes López Nitsche, a doctor in immunology and professor at the University of Chile. Brazil would be one of the most capable countries to promote a vaccine production pole in Latin America, according to specialists / Marcos Nascimento / Public Photos

On the Asian continent, India is responsible for the packaging of 32% of vaccines worldwide, however it only managed to immunize about 11% of its population and remains the second most infected country in the entire planet: 32.8 million patients and the third in deaths with 439 thousand deaths.

Japan experienced a case boom right after the Tokyo Olympic Games, with an average of 21,000 cases a day, a total of 1.5 million infected, 16,123 deceased, and just over 46% of Japanese immunized. China has returned to adopt lockdown in regions that had the worst covid-19 outbreak since the start of the pandemic in Wuhan. After suspending flights and carrying out 9 million tests, the Chinese government managed to contain the spread of the virus.

“We are experiencing one of the highest levels of uncertainty since the beginning of the pandemic, because we still don’t know how the Delta variant will behave,” says Mercedes López.

The combination of slow vaccination, high circulation of people and coexistence between vaccinated and non-immunized provides the perfect environment for the emergence of new variants. WHO warns that the delta variant will not be the last to emerge. With the high mutability of the virus, new strains can be identified, even more resistant and contagious.

The reproduction rate of the first identified strains of the sars-cov2 virus was 2.5, which means that an infected person could transmit the disease to two or even three people. In the case of the delta variant, the number goes up to seven.

“These current immunization rates are not high enough to control the variant. For that, you should vaccinate 100% of the population and even so it is possible not to reach this target of 85% of immunized people.”, comments the physician and public health lawyer, Daniel Dourado.

The new variant is already the most present in the United States and Brazil, and, according to the WHO, it should be the predominant strain in the world by the end of 2022.

:: “Passport of the vaccine” is still valid in Rio for elective surgeries and the Família Carioca program ::

“It is natural that delta is predominant because that is how the infectious agent spreads: the one that is better adapted will be the dominant one and the other variants tend to disappear”, comments Dourado.

Furthermore, some studies indicate that some vaccines may lose their effectiveness six months after application, raising the hypothesis of the need for a third dose. For experts, no country is free from experiencing new waves of contagion.

Last week the variant was identified “mu”, which caused 4,600 infections and is present in 39 countries, including Colombia. WHO is still studying the behavior of the new strain.

“Coronavirus is stronger and faster, but that doesn’t change the plan to control it as it works. We just need to be faster and distribute vaccines evenly. If we don’t do that, we’re fighting ourselves.” , declared Mike Ryan, Executive Director of WHO, at a press conference.

Despite the fourth wave in Europe, Latin America remains one of the regions most affected by the pandemic. According to the Pan American Health Organization (PAHO), only one in four people in the region has been vaccinated, with an average of 20% of the Latin American population receiving at least one dose. About 1/3 of the reported covid-19 deaths worldwide are in Latin America, with Peru being the nation with the highest fatality rate in the world, with about 5,900 deaths per million inhabitants.

Chile and Uruguay are the only nations with almost 70% immunized, but the high circulation of people in the national territory makes hospitalization rates remain high. About 81% of Chilean hospitals are occupied with covid-19 patients.

“We must quickly contain the circulation of the virus, since if the virus continues to spread around the world, we will always have the possibility of the emergence of a new variant that puts the world in check again”, warns López.

PAHO has made a new call for international donations to gather 540 million doses to vaccinate at least 60% of Latin Americans by the end of 2021.

“We call on all countries with overdoses to quickly share these immunizations with our region, where they would have a life-saving impact,” said PAHO Director General Carissa Etienne.

For multilateral organizations, Latin America has been “disproportionately” affected by political and economic aspects that impede the acceleration of immunization and the application of radical quarantines.

To this end, the Pan American Health Organization announced the creation of a platform to manufacture immunizations in Latin America. The first initiative would be to transfer technology so that countries can replicate existing formulas.

“The proposal is interesting, but it will depend on the suspension of patents that is under discussion at the World Trade Organization. Not only the vaccine, but the entire production chain is protected by industrial property. So the countries depend on it not to suffer sanctions”, explains the public health lawyer Daniel Dourado.

:: Understand how patents contribute to the lack of covid vaccines in the world ::

For the infectious disease doctor. the proposal to create a regional platform should be part of the public health policies of Latin American governments.

“It is not enough for pharmaceutical industries to install their structures in our countries. We must create a regional hub. From a geopolitical point of view, this issue is strategic. Advancing in this aspect allows us to decolonize knowledge production. We are able to do this in Chile, Brazil, Mexico, Colombia, Peru and other places”, he points out.

The lifting of patents came up for debate in October 2020 at the WTO, but was blocked three times by the United States and the European Union voting against. 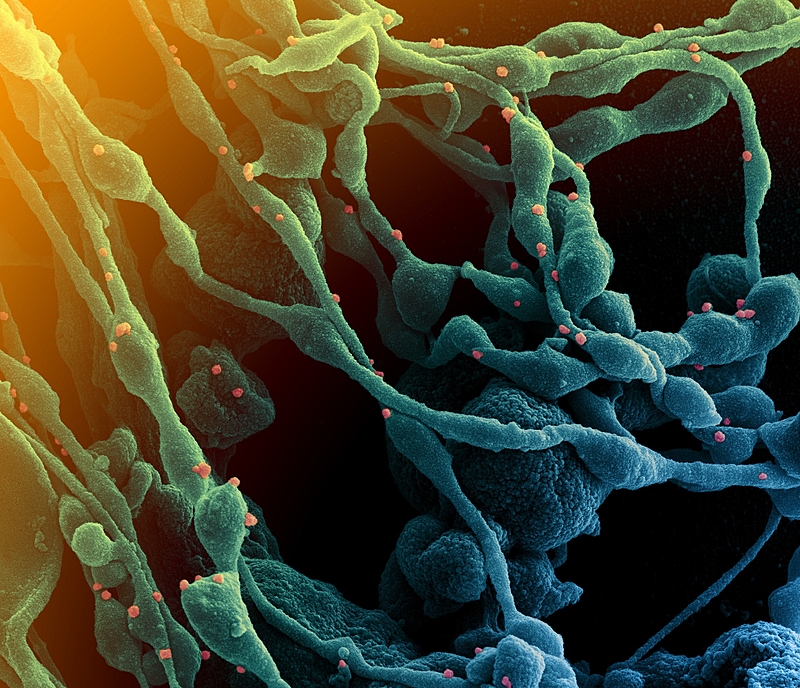 WHO predicts that the Delta variant, up to 50% more contagious than the original strain of the sars-cov2 virus, will be prevalent in the world by the end of 2022 / NIAID / Public Photos

The pressure exerted by rich countries and the concentration of the vaccine market also influenced the effectiveness of the Covax Consortium, launched by the WHO with the Alliance for Vaccination (Gavi) and the Coalition for Innovations in Preparedness for Epidemics (Cepi). The goal is to gather enough formulas to immunize at least 20% of the population of each country that signed the agreement.

According to the latest data offered, until July, Brazil and Mexico were the countries that benefited most from doses, but other nations, such as Venezuela, are still waiting for the first batch.

“The Covax consortium depends on donations from rich countries. The idea is very good, even before the pandemic, but the distribution logic is the market logic”, highlights Dourado.

The lobbying of the biggest pharmaceutical companies has affected the global market. In Finland, in May 2020, scientists developed a formula against the new coronavirus, nicknamed “Linux”, in allusion to the alternative operating system to Windows, as researchers at the University of Helsinki intended to distribute the formula freely, without patents.

:: Article by Brazilians on combating covid in China awarded at Asia-Pacific conference ::

However, the government chose to buy doses of Moderna instead of investing in its own vaccine. Vladimir Putin’s government also accuses the European Union of exerting political pressure by denying access to tourists who have been vaccinated with Sputnik V.

On September 1, the World Health Organization inaugurated, in Berlin, an Intelligence Center for the Prevention of Pandemics and Epidemics, to, according to the general director, Tedros Adhanom, reduce the problems of “multilateral cooperation” in the face of health emergencies.

While some countries are still waiting for donations, others are starting to apply a third dose to patients over 60 years of age. For specialists, the priority should be to increase the vaccination rate in all regions before applying booster doses.

“If we are to reduce the viral dose in the world, it means that the distribution of vaccines must be equitable. We should create a decentralized biomedical research system, in which Europe and the USA are not the center, but in which other countries are also able to develop and produce immunization agents, including for future pandemics”, defends Mercedes López.