The Federal Intervention Office of Rio de Janeiro continues to embezzle public coffers even after almost three years of its deactivation.

The structure, currently linked to the Civil House of the Presidency of the Republic, headed by Minister Ciro Nogueira, has a monthly cost of R$ 105,187.24 with human resources.

The military mission in public security in Rio de Janeiro was officially ended on December 31, 2018, after having been determined by then-President Michel Temer (MDB). The interventor, head of the operation in Rio de Janeiro, is the current Minister of Defense, General Walter Braga Netto.

:: Military intervention did not control the militia advance in Rio de Janeiro ::

The monthly cost of the cabinet, obtained by Brazil in fact, corresponds to the payment of commissioned positions, established by Decree No. 10,547, of November 20, 2020, and salary bonuses to the military, for occupying functions in a structure outside the Armed Forces.

The cabinet team is made up of 18 servers, 13 of which are active soldiers and another 5 (five) occupying commissioned positions.

Initially, the group would be extinguished in mid-2019. The date was postponed to June of the same year. Then, to March 31, 2020. Then, the new forecast was December 1, 2020. On the 8th of that month, however, an ordinance determined the sequence of activities for another year, until December 2021.

Among the themes monitored by the team is the case revealed by the Brazil in fact on a contract worth more than R$40 million that is being investigated in an administrative proceeding in the federal government. The agreement, signed without a bidding process with the US company CTU Security, was signed in 2018.

The contract with the Brazilian government provided for the delivery of 9,360 bulletproof vests to the Civil Police of Rio de Janeiro. The average cost of each vest would be R$4.3 thousand. In the first month of the Bolsonaro government, the Executive paid R$ 35,944,456.10 to the company. Three months later, however, the payment was canceled and the contract suspended.

Since 2020, the Executive determines the responsibilities for non-compliance with the contract. At the end of July, the government extended the verification period for the third time for a period of 180 days.

At the time, the Executive changed the pattern of publications in the Official Gazette and hid the name of the company, which is being investigated in the United States for involvement in the assassination of the President of Haiti, Juvenel Moïse.

The Federal Intervention Office claims to have acted, after the deactivation, in a Legacy Plan for the State of Rio de Janeiro. To this end, the team created the Federal Intervention’s Tangible and Intangible Legacy Database (BDLTI) to organize the registration of all goods delivered to the Secretary of State for Military Police, to the Secretary of State for Civil Police, to the Fire Department Military, the Civil Defense Secretariat and the Prison Administration Secretariat.

On its website, the team posted two infographics about the delivery of equipment that would represent the “legacy” of the work performed by the military. Look: 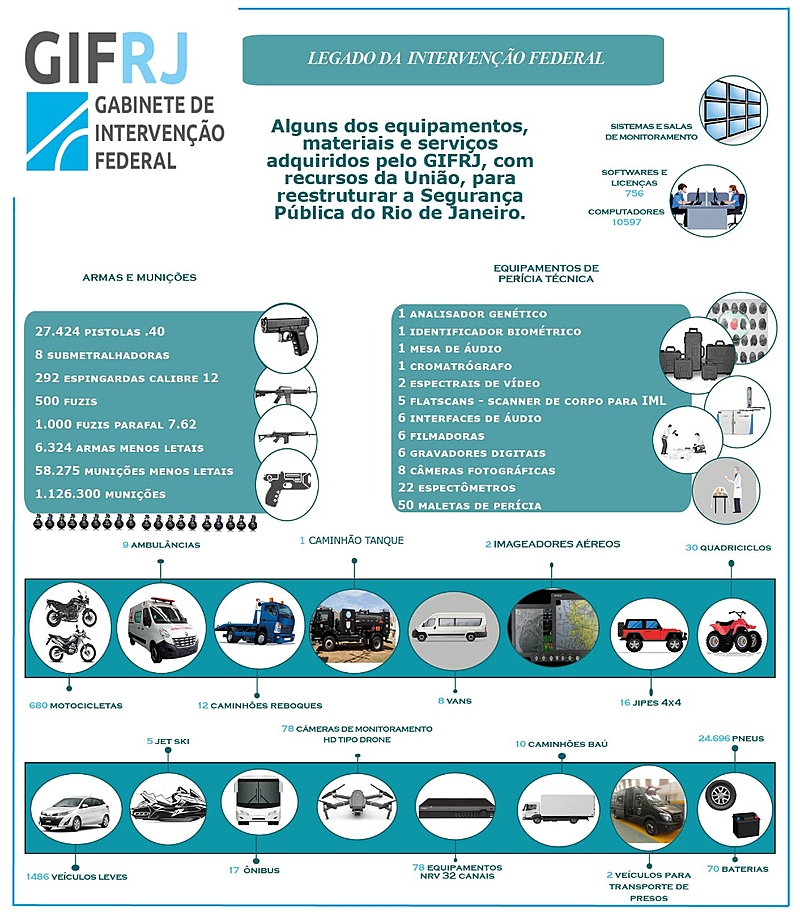