Brazil’s government concealed the name of the CTU Security company in an ordinance published in the Federal Register last July 30. The company is investigated for its involvement in the assassination of the president of Haiti. At the time, the General Secretariat of the Presidency announced they were extended for another 180 days the administrative investigation period of the contract signed with CTU. However, the federal government changed the pattern of previous publications on the same case and did not insert the company’s name in the ordinance.

It was the first time that an ordinance on the Federal Register about the contract with CTU Security did not present the company’s name. The case was identified only with the administrative proceeding number pending on the Presidency of the Republic.

Just over a week earlier, on July 22, Brazil in fact revealed that the contract with the company has been subject to an internal investigation by the Executive branch since 2020. The report also showed that businessman Antonio Emmanuel Intriago Valera, known as Tony Intriago, is under investigation in Florida, United States, for participating in the assassination of Haiti’s President Jovenel Moise inside the governmental palace on July 7.

General Walter Braga Netto, Minister of Defense, signed the contract of more than BLR$40 million. It is being investigated in the administrative proceeding currently under way in the Executive. The agreement was signed without a bidding process in 2018 by the Federal Intervention Office in Rio de Janeiro, headed by the Braga Netto.

Brazil in fact sent questions about the ordinance cover-up to the General Secretariat of the Presidency, responsible for the investigation, to the Civil House, where the Intervention Cabinet is located (which is still in operation), and to the Ministry of Defense, headed by Braga Netto.

None of the agencies responded to the questions until the publication of this news story. Brazil in fact remains open to receive answers. See the difference between the ordinances already published about the case:

Ordinance without the company’s name:

This ordinance extends the investigation period for more than 180 days. / Federal Register

Ordinances with the company’s name: 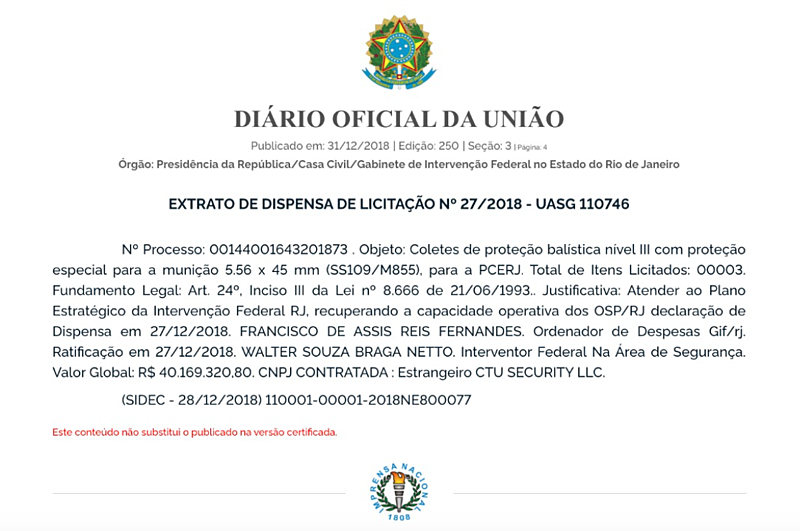 This document, published in 2018, informs about the exemption from the bidding process. The contract with CTU Security intended to buy bulletproof vests. / Federal Register 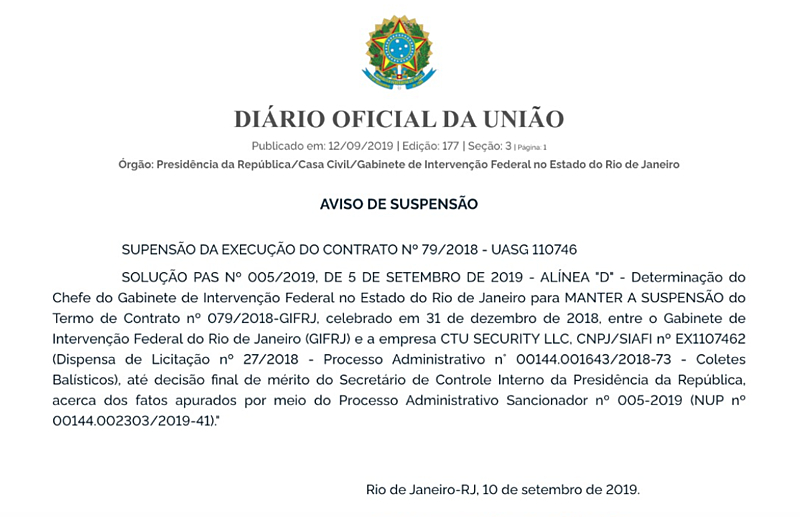 The contract suspension document, published in 2019, first year of Bolsonaro government; the agreement was breached and sent for investigation. / Federal Register 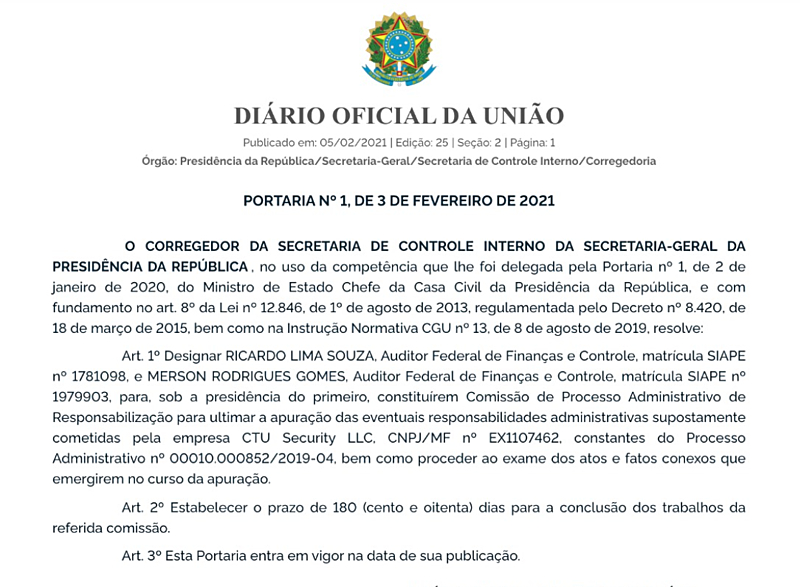 This ordinance appoints internal auditors to investigate responsibilities; the deadline for examination expires in the first week of August. / Federal Register

I understand the case

The contract with the Brazilian government provided for the delivery of 9,360 bulletproof vests to the Civil Police of Rio de Janeiro state. The average cost of each vest would be BRL$4,300. In the first month of Bolsonaro’s government, the Executive paid almost BRL$36 million to the company. Three months later, however, the payment was canceled and the contract suspended.

Since 2020, the Executive determines the responsibilities for non-compliance with the contract. The investigation deadline has already been extended by 180 days three times. The new deadline ends on January 2022.

Brazil in fact requested, via the Access to Information Law, the full administrative proceeding that investigates irregularities in the case. However, the Federal Government stated that the case is being heard in private until the investigations are completed.

The waiver of the bidding process for purchases by the Intervention Office was a request by Braga Netto made in May 2018 to the General Accounting Office (TCU, in Portuguese). The agency gave authorization, in June of that year, for no-bid contract purchases.

According to reports by Florida authorities, in an interview with the Politico website, the CTU Security company owner would have hired more than 20 former soldiers from Colombia to carry out the Haiti president assassination. Last week, the head of the Haitian National Police trial Intriago of visiting the country several times and being part of a conspiracy to kill Moise but did not provide any further information.

From 2004 to 2017, around 37,000 officers of the Brazilian Armed Forces were deployed to Haiti. In July, Brazil in fact Show that at least eight military personnel who play a leading role in the mission occupy or have occupied positions in the government of President Jair Bolsonaro (non-party). Braga Netto did not work in the Caribbean country, but he has a long relationship with the US military.

READ MORE: VIDEO | Bolsonaro gives more power to the center-right to save his government

Ten years ago, the current Defense Minister was appointed military attaché of the Army Command at the Brazilian Embassy in the United States. Braga Netto three in North American territory for approximately years. He left the post in 2013 when he returned to Brazil to work on the security scheme for the 2016 Olympic Games in Rio de Janeiro.

Less than two years after the Olympics, in February 2018, Braga Netto was appointed by former president Michel Temer (MDB party) as federal interventor in Rio de Janeiro. The intervention continued until December of that year.