What will the world be like when we overcome the pandemic? Will we have a fairer and more caring world? Will there be a decline in individualism and meritocracy? These were some of the questions that analysts, politicians, journalists and society as a whole asked themselves at the beginning of the pandemic.

The teachings of collective care and the hope that this health crisis would become a springboard towards a more just world were disappearing as the pandemic progressed with force.

With each step, the pandemic gained intensity, and the philosophy of “all for themselves” was adopted by most governments around the planet to the detriment of “we will come out of this better and together”, forcing social organizations to fill the gap .

After more than a year and a half of confinement, some evidence shows that the world has not changed. The pandemic deepened pre-existing social inequalities, and the beneficiaries remained the same.

Solidarity action in the market in the Lanusse neighborhood, in the Luján region / ARGMedios/Julieta Brancatto

In Argentina, the data released by INDEC (National Institute of Statistics and Census, in Portuguese) at the end of March are conclusive on the matter: 42% of the population lives under the poverty line (one percentage point more than in the second half of the year 2019) and 10.5% live in extreme poverty (two percentage points more when compared to the same period).

Those most affected by the crisis are young people: around 8.3 million boys and girls living in financial poverty, representing 62.9% of the total number of children and adolescents; 2.4 million live in extreme poverty.

In this context, the federal government, through the Ministry of Social Development, launched the “Argentina against Hunger” program to support the most vulnerable sectors of society. The portfolio headed by then-minister Daniel Arroyo invested more than 133.2 million Argentine pesos throughout 2020, which represented an increase of 451% compared to the previous year.

Through the Food Card, the Council’s first measure against hunger, more than 95.3 million pesos (5 million reais) were invested across the country. As of August 20, a total of 3,764,278 families with children under 14 years old; 48,820 families with children with disabilities; and 71,969 from pregnant women.

The recipients of the program received the following amounts: 6 thousand pesos (320 reais) per month for those who have one child, 9,000 pesos (482 reais) for families with two children, and 12 thousand pesos (643 reais) for those with three or more children. As part of the program, funds were also allocated to community canteens and cafeterias that distribute food to families and communities.

Another of the Argentine government’s initiatives was the extraordinary taxation of large fortunes, to be paid by taxpayers who declared income greater than 200 million pesos (10.7 million reais). 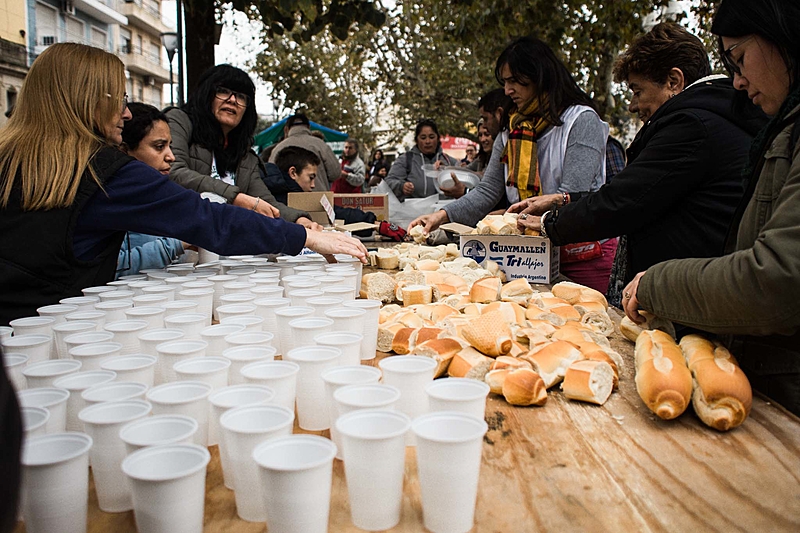 By the end of April, almost 80% of this group had already paid the tax, and the state managed to collect 223 billion pesos (about 12 billion reais) for the purchase of medical equipment, subsidies for micro and small entrepreneurs, student grants and housing programs in poor neighborhoods. Those who didn’t pay – about 2,000 people – went far enough in filing lawsuits considering the measure illegal and unconstitutional.

:: There’s nothing worse than sleeping hungry, says a resident of the outskirts of Belém (PA) ::

Solidarity and organization: the pillars of the food assistance program

The impact of four years of neoliberal policies and the tougher restrictions due to the COVID-19 global pandemic restricted the possibility for thousands of workers to develop informal activities.

With the interruption of the strategies of popular sectors to survive, the population in a situation of food insecurity grew. At that time, social organizations and community organizations – driven by a spirit of solidarity – emerged to coordinate with the State ways to alleviate issues faced by the people.

Parque Lasa is a neighborhood in the center of Luján, a city with 120,000 inhabitants located in the western part of the populous province of Buenos Aires. Lasa is one of the Luján neighborhoods historically forgotten by the state.

During the most severe phase of the quarantine, more than 200 meals were prepared at the Sociedade de Fomento de Lasa (a non-profit neighborhood organization that works to support the community) Monday through Thursday to assist families hardest hit by the economic crisis. 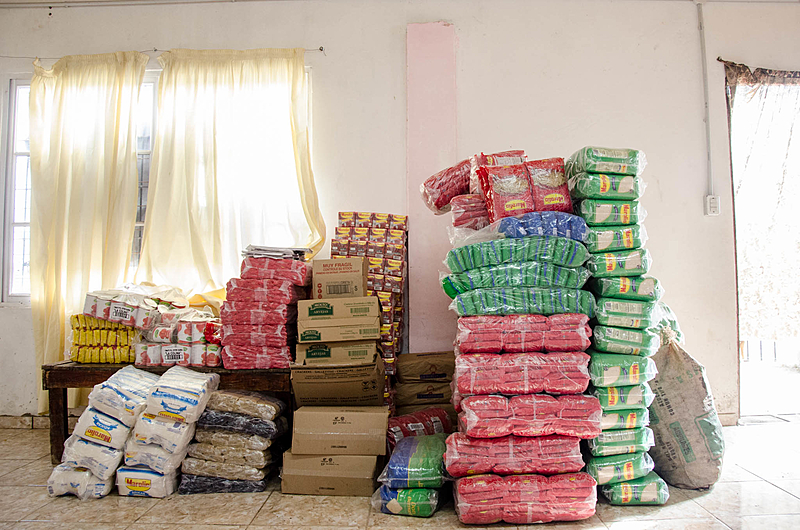 Food stored in the communal kitchen in the San Jorge neighborhood, in Luján / ARGMedios/Julieta Brancatto

Juan Acotto, from the Unemployed Workers Coordination (CTD), explained the first steps of this articulation work, when the measures of social distancing were announced. “While the main thing to do was respect the isolation measures, we knew there would be an impact on the economy of those who live day to day.”

In the different food assistance spaces operating throughout the Luján area, more than 9,000 families and an estimated population of 35,000 people received monthly support.

One of the municipal administration’s strategies was the articulation with social organizations that promote soup kitchens in the neighborhood. Through these kitchens and snack bars, 1,600 families received help, equivalent to 6,500 people.

:: ‘Hunger in Brazil is the result of a political decision’, says Greenpeace to the Bem Viver Program ::

Juan said the Human Development Area and the Food Emergency Committee called a meeting to organize the aid system. They set up a series of neighborhood groups to carry out social organizations.

“At Parque Lasa, the organization has operated a community cafeteria for years.” He also commented: “We made this structure accessible and then we started working together with the Sociedade de Fomento and the Primary Health Care Center. This is how the subcommands of Parque Lasa, Americano, Barrio Universidad and El Trébol were formed.”

CTD leader Aníbal Verón highlights two concepts: solidarity and organization. “In view of this eventuality, a lot of solidarity emerged in our community. We know of neighbors – comrades who, day after day, give everything they have to overcome the challenge of hunger in neighborhoods as poor as these.” 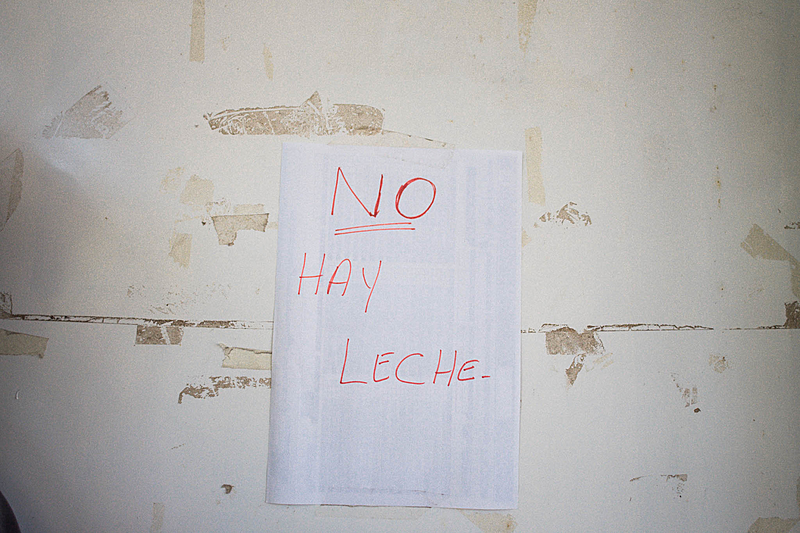 Likewise, Elías Sosa, a neighbor who approached the Sociedade de Fomento to help in the community cafeteria, identified: “These situations are when solidarity and social commitment become visible.”

Elías also commented that people in the community belong to the sectors of society that were most affected by the measures of social isolation. “Although we are all going through this moment in different ways, I believe we have a common word that is felt blindly: empathy.”

Furthermore, he said that this moment should be well used by the State and by the different neighborhood, social and militant organizations to work together and achieve a truly effective contribution to the situation being experienced.

:: Homeless and without food: in the capital of Brazil, only donations save families from hunger ::

The situation of abandonment faced by many communities throughout Argentina as a result of the pandemic showed the State the urgency of implementing measures to address the country’s structural problems. The solidarity of social organizations and neighborhood groups was one of the driving forces that made it possible for the excluded to survive.

With the end of the pandemic still far away, the slow immunization and the growing hate speech of unscrupulous power-hungry opposition politicians, it is clear that the urgency is to address the hunger that plagues the majority. This will make it possible to move forward in solving other urgent issues, such as education and development, which could finally restore Argentines to the dignity that was taken from them by years of voracious neoliberalism.