Brazil’s Independence Day, celebrated this Tuesday (7), was marked by affection and solidarity in Aldeia Ocoy, a Guarani indigenous reserve, in the municipality of São Miguel do Iguaçu, in the western region of Paraná.

Led by economist and writer Eduardo Moreira, the community received 3.5 tons of food, distributed in 210 basic food baskets. The action was the result of a live promoted by the economist on August 18 with the objective of raising funds in the face of the torment faced by the Avá-Guarani people who live on the shores of Lake Itaipu.

“I was thrilled to receive these videos and photos today. The Human Rights and Popular Memory Center in Foz do Iguaçu coordinated the distribution of food baskets that the Instituto Conhecimento Liberta community donated to the Ocoy village”, shared Eduardo Moreira on his Instagram profile.

In the same post, the economist, who has taken up popular causes across the country, highlighted the scenario faced by the village. “They live in a situation of poverty and abandonment by the State and by the Itaipu Binacional company. I was in the village a few weeks ago and I was shocked by what I saw”, he said.

Of the 210 families that live in the village, only 120 receive food baskets delivered by the hydroelectric plant through an agreement signed with the City of São Miguel do Iguaçu.

“This food arrived at a good time. After Eduardo Moreira was here, Itaipu called us to a meeting and said he would see the possibility of increasing food delivery. But so far nothing has happened. If it weren’t for this donation, many families would continue to experience difficulties”, said chief Silvano TupãveraCenturion. 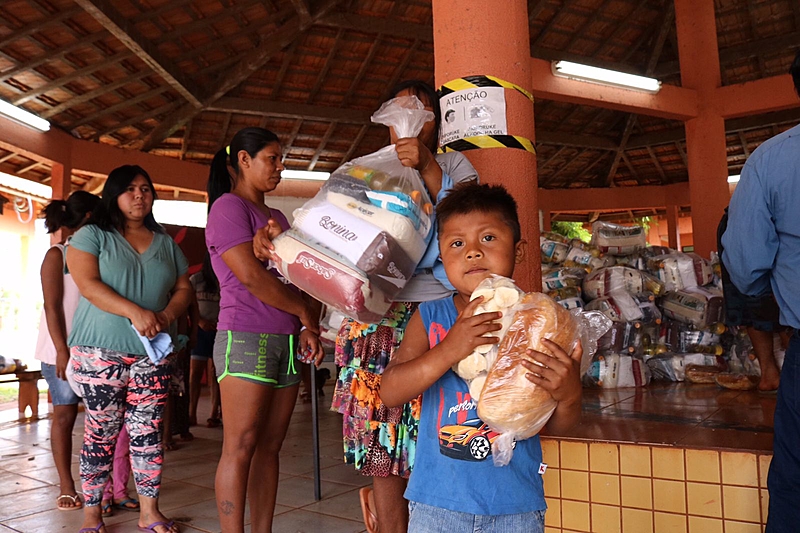 In addition to food insecurity, the indigenous leadership revealed to the Brazil de Facto Paraná that the community also suffers from the lack of drinking water and the disrespect by the local authorities.

“It’s all very difficult. Not every village has drinking water, this is very harmful. We also suffer from the lack of space to cultivate and we do not have the autonomy to take care of what is ours”, he said.

Responsible for coordinating the delivery of food baskets, Hamilton Seriguelli, member of the board of the Foz do Iguaçu Center for Human Rights and Popular Memory (CDHMP), highlighted the agency’s option to make the donation on the September 7th holiday.

“On a day marked by coup and the attack on our democracy, we chose the path we have always taken, that of affection and solidarity. The delivery of this food does not solve the problem of this indigenous community, however, it draws attention to the reality of these people who suffer the consequences of the lack of assistance in the backyard of the largest hydroelectric plant in the world”, concluded Seriguelli.