The original peoples mobilized this Wednesday (25), in Porto Alegre, on account of the judgment of the thesis of the “time frame” taking place today at the Supreme Court (STF). Under heavy rain, families of the Mbyas Guarani and Kaingang ethnic groups, quilombola communities and supporters held a vigil and a political act in front of the headquarters of the Federal Regional Court of the 4th Region (TRF4).

The act was called by the Teia dos Povos em Luta and the Frente Quilombola do RS. The objective is to support the mobilizations that take place in different parts of the country, especially in Brasília, where more than 6,000 indigenous people participate in a vigil at Praça dos Três Poderes, the Acampamento Luta pela Vida, in protest against the thesis of the time frame.

:: Indigenous rights at stake: understand the judgment of the time frame in the STF ::

The thesis argues that land demarcation should only be carried out if the people making the request were occupying the territory on October 5, 1988, the date of promulgation of the Federal Constitution.

Indigenous peoples and quilombolas in RS mobilize in front of TRF4 against the approval of the timeframe / Photo: Roberto Liebgott

Leaders delivered a letter to the presidency of TRF4

Among the objectives of the mobilization in the state capital is the delivery of a letter to the presidency of TRF4, where they express their opposition and arguments in relation to the proposed timeframe. The letter considers that the thesis violates fundamental rights that were consolidated over the last decades. 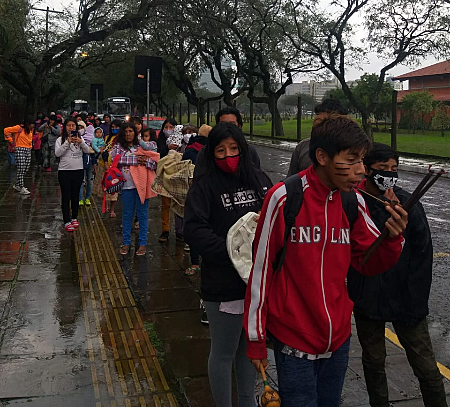 The document also warns that the period the country is going through is very worrying due to the denial of rights, which seem to be conditioned by the interests of economic and political sectors. Furthermore, it reinforces that the vast majority of the most active congressmen in the National Congress act for the benefit of their own interests.

“[Esses interesses] they are rooted in a society built to the detriment of the Afro-indigenous majority, following the logic of a small minority that directly or indirectly benefited from the Colonial, Slave and Racism violence that succeeded it”, states the letter filed by the leaders with the presidency of the court.

Movements will continue to be mobilized to follow the vote

According to the lawyer and member of the Frente Quilombola RS, Onir Araújo, the families that went to TRF4 will continue to be mobilized on vigil, following the deliberations of the Supreme Court.

“We are strengthening the energies for the STF to remove the racist and colonial thesis from the time frame, accompanied by the enchanted and orixás, in the hope of a fight”, says the lawyer.

He also points out that the document delivered to the presidency of TRF4 also presents the position of the 5th Assembly of Peoples, held in Rio Grande do Sul between July 30th and August 1st, 2021. 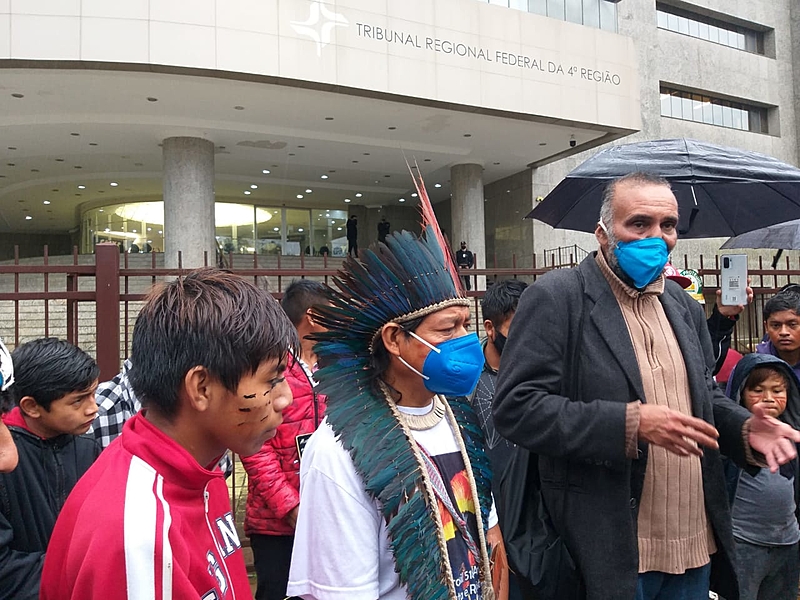 Cacique José Cirilo and lawyer Onir Araújo in the mobilization against the time frame in front of the TRF4 / Photo: Roberto Liebgott

The coordinator of the Southern Indigenous Missionary Council (Cimi Sul), Roberto Liebgott, recalls that the mobilization took place even under heavy rain and that the administration of the TRF4 headquarters did not even allow the families to shelter under the building’s balcony.

“We are here, men, women, children, young people and teenagers, all united in the sense of having the conviction that with strength, struggle and resistance, challenges can be overcome”, says Roberto.

He also recalls that the decision adopted by the Supreme Court will be taken as a reference for the procedures for demarcating indigenous lands and titling quilombola territories across the country, reinforcing the importance of mobilization.

* With information from the Quilombola Front of RS