Shortly after the release of the latest report by the Intergovernmental Panel on Climate Change (IPCC) in August, no president from the ten most populous countries in South America spoke more about the climate emergency on twitter than Colombian Iván Duque. O Brazil in fact spoke with local scientists to understand if the words of the president of Colombia also translate into actions and public policies.

The IPCC’s full report, at almost 3,000 pages in its full version, condenses the work of thousands of scientists and shows a worrisome scenario: immediate, large-scale actions to reduce greenhouse gas emissions are needed to try to control the global warming.

Furthermore, pollution generated by human activity has already created irreversible and unprecedented effects. The concentration of carbon dioxide is the highest in at least 2 million years and the rise in sea level is progressing at the fastest pace if we consider at least 3,000 years.

:: Brazil can be the “great villain” of climate diplomacy, says a USP researcher ::

The IPCC has been producing reports on climate change since 1990, but one of the new features of its latest version is predictions about how changes in nature will affect different parts of the world.

Earth warming may mean that areas of frozen ground in the past can be turned into crop fields, as in some places in Russia, but it also means that other hotter and more fragile places will be affected more drastically than it might seem when speaks of a heating of 1.5°C. This is the case for much of Central and South America.

According to the IPCC, average temperatures in the region will most likely increase at a higher rate than the global average, which will also bring increased heat waves. There is also a forecast that droughts will increase in much of the continent, phenomena that Brazil and Chile are already facing in large proportions.

Despite the worrying scenario for the region, its elected political leaders say little about the subject. The report of Brazil in fact followed the Twitter of presidents, vice presidents, presidents of the legislature and ministers of Agriculture and Environment of the 10 most populous countries in South America to count mentions of words like “climate change” and the IPCC report itself. The period selected was one month after the publication of the IPCC report, from 9 August to 9 September.

Meanwhile, among the highest officials, the most active voice on climate change on the web was Colombian Iván Duque. Besides him, among presidents, only Nicolás Maduro addressed the matter.

Colombia leads the ranking of the number of mentions of words involving the climate emergency on Twitter. Here, numbers count the sum of mentions of all authorities in each country considered / Infographic: Brasil de Fato

Who is Ivan Duque?

Lawyer Iván Duque Márquez has been Colombia’s president since August 2018. He is the son of Iván Duque Escobar, who was governor of Antioquia, the country’s most populous department, in the 1980s.

“He is a president who represents the right and the ultra-right of this country. He is a president who belongs to a party called the Democratic Center Party, created and directed by Álvaro Uribe, who is a former president of Colombia”, assesses Francisco Cortés Rodas, a professor at the Philosophy Institute of the University of Antioquia. 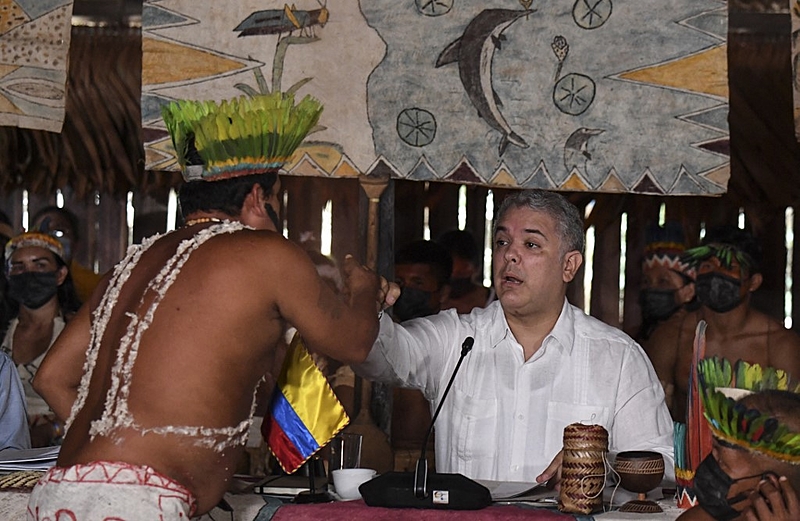 During Duque’s government, Colombia went through two national strikes, in 2019 and 2021. In the most recent mobilization, at least 68 people died and more than 1,000 were injured, says the NGO Human Rights Watch. Police abuses, such as sexual violence and rape, against protesters were registered, with 419 people disappeared, according to the NGO.

For Rodas, Duque’s government is “disastrous in many points of view” and he is the most unpopular president in Colombia’s recent history. There is no reelection for the most important office in the country’s Executive, but Duque arrives for the next presidential elections, scheduled for May 2022, disapproved by 75% of the population.

Questioned internally, Duque seeks to present himself as a proactive leader of the environmental agenda in the international arena. The Colombian president defended at the UN General Assembly, which took place this week, that immediate action is needed to tackle climate change.

He was present at the Climate Summit, led by US President Joe Biden, and also at the Latin American Summit on Climate Change, led by Argentine President Alberto Fernández.

“We will arrive in Glasgow at COP26 with a commitment to reduce our greenhouse gas emissions by 51% by 2030 and we are on our way to achieving carbon neutrality by 2050,” Duque told the UN Assembly on Tuesday (21) , where he also defended that the International Monetary Fund (IMF) does not consider investments linked to climate action in the calculation of the fiscal deficit. 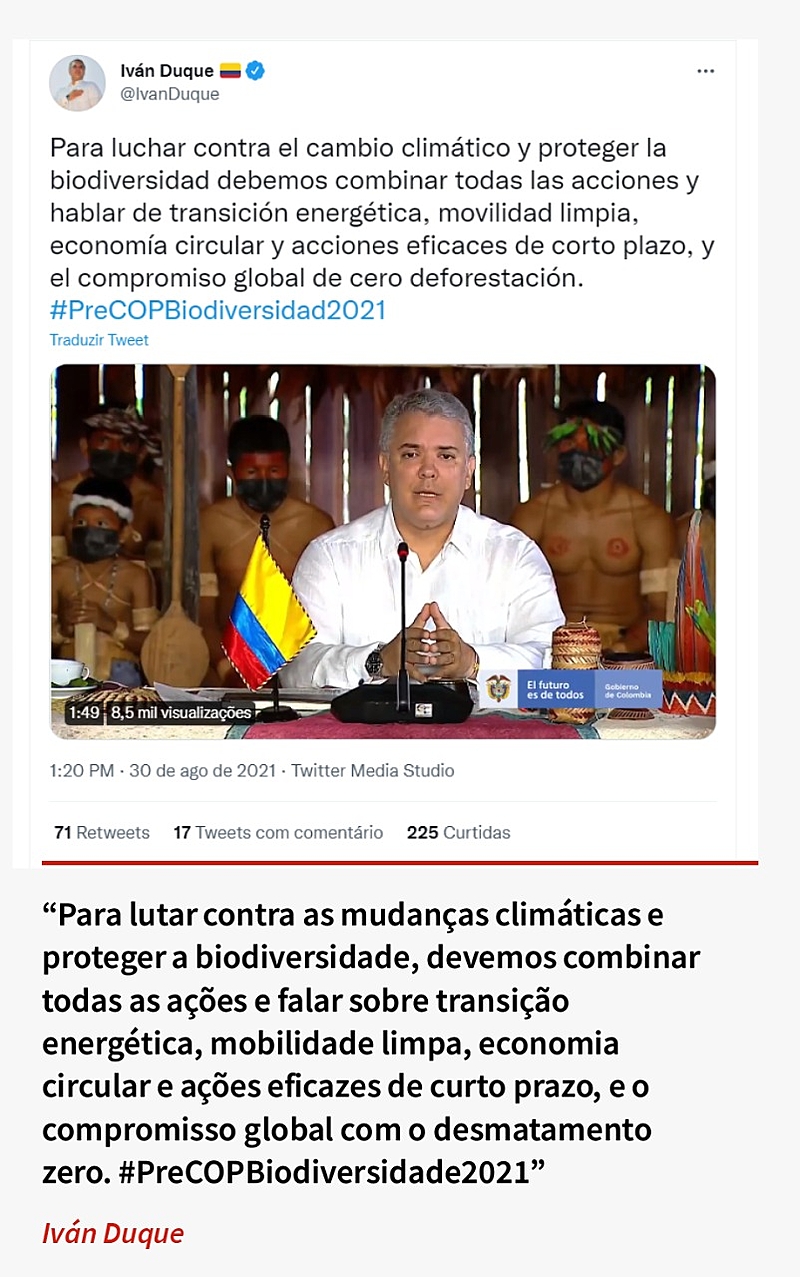 The violent and raw reality of Colombia

Despite the discourse concerned with the environment in the global arena, the data on the reality of Colombia and the testimonies of scientists heard by the Brazil in fact come into conflict with the country that the Colombian president seeks to present.

Data compiled by the Foundation for Conservation and Sustainable Development (FCDS) show that Duque’s government has not produced any reduction in deforestation in the country. On the contrary, the years 2018 and 2020 registered the highest rates of primary forest loss in the Amazon since the beginning of measurements in 2002.

To try to stop the devastation, the Colombian government launched in April 2019 “Operation Artemis”: a military offensive composed of dozens of Army battalions to stop the felling of trees. According to FCDS, the initiative failed to slow down the destruction of the Amazon. 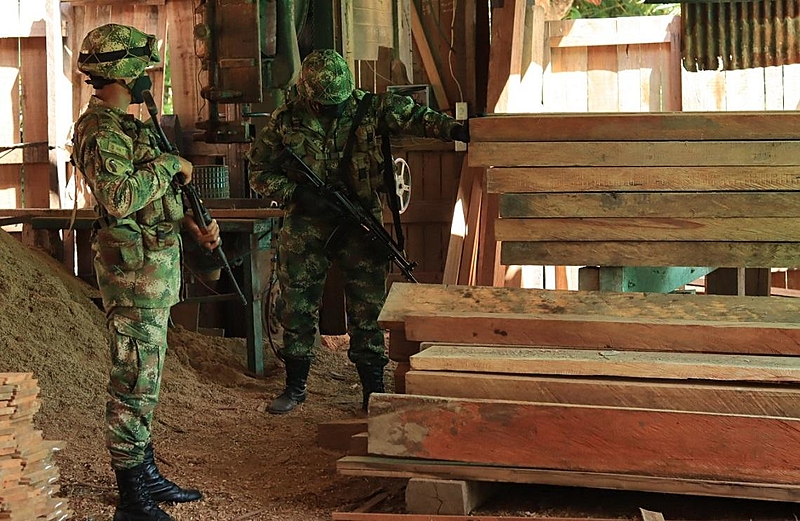 For two years in a row, Colombia has been the most dangerous country in the world for environmental activists according to a Global Witness survey. The NGO claims that 65 Colombian environmental leaders were murdered in 2020, the highest number on the continent, and that indigenous peoples are particularly affected by the context of violence.

Colombian scientists published a letter in Science magazine in July this year in which they highlighted the contradictions in Duque’s speech.

In the text, the researchers highlight that the Colombian president works against the peace agreement with the Revolutionary Armed Forces of Colombia (FARC), which, in the end, “unwittingly protected vast areas of forest using them as camouflage”; launched the Artemisa military operation against local communities that deforest while ignoring environmental crimes by “well-connected and politically influential actors”; finally, it blocked the signing of the Escazú Agreement, a Latin American and Caribbean treaty to build multilateral efforts for environmental preservation.

:: ELN evaluates that Colombian elections of 2022 could “open the way for peace” ::

In addition, the Fifth Committee of the Colombian House of Representatives in June rejected a bill that sought to ban the fracking in the country. All members of the Democratic Center, Duque’s party, rejected the proposal that sought to prevent the use of the underground fuel extraction technique that is known for its environmental risks.

The UN Special Rapporteur for the Environment and Human Rights, David Boyd, defends the passage of the law anti-fracking and says that Colombia should join countries that prohibit this type of exploitation, such as Costa Rica, Uruguay and France.

“This is a country very much given over to neoliberalism. It is a country given over to extraction. I know Colombia has rules, climate change regulations, strategies and a lot of things, but they’re actually inoperative. In reality, in the territories, the same forces continue to operate”, says Paola Arias, a professor at the University of Antioquia and one of the authors of the latest IPCC report.

The researcher emphasizes that public policies and negotiations to face climate change are not keeping up with scientific evidence, which shows the undeniable effect of human action on nature.

And when there is a debate, the professor emphasizes that she is often dominated by a “technocratic” vision that believes that it is enough to replace petroleum with lithium, for example, to follow the same economic model.

“I believe that the big problems that humanity is facing now, be it the pandemic, climate change, inequality, poverty, etc., everything has a structural cause and is the economic model. I believe that we will never be able to say that there is no connection between the economic model and what it develops, what it creates”, says Arias.

:: Colombia: after visit, IACHR reports concern over “disproportionate use of force” in protests ::

Melissa Ruiz Vásquez, a Colombian scientist and doctoral candidate in Hydrology, Biosphere and Climate Interactions at the Max Planck Institute, also reaffirms the disconnect between the words of Iván Duque and his public policies.

“Let’s say that advertising about good care of the environment is not enough. It is one thing to say in words, another thing is these words in reality. So I believe that there is a lack of direction and commitment regarding these, let’s say, nice words about caring for the environment. These ecosystems lack more protection, they lack more support for the indigenous communities”, says Vásquez to Brazil in fact.

The researcher points to the role of the Páramos, a biome present at high altitudes in the Andes Mountains and rich in biodiversity, which works as a kind of “water factory”, but is seriously threatened by climate change. Without the halts, the availability of clean water to millions of people, inside and outside Colombia, could be affected. Registration of the paramo area in Colombia, the second most biodiverse country in the world / Patricio Mena Vásconez / Creative Commons

Professor Francisco Rodas assesses that Duque is a two-faced politician, as he makes a different speech from his action in the peace agreement with the FARC and also in the environmental area. Politics is the field of contradictions, emphasizes the analyst, but the Colombian case presents many contradictions.

“There are two facets, two faces. But, of course, this is typical of a politician, only the politicians in the ideal world are the ones who have only one face, but this president has two, and they are very marked against each other”, says Rodas.