On the afternoon of August 25, 1961, the country suffered a shock: to general astonishment, President Jânio Quadros resigned from his post, claiming to be under pressure from “terrible forces”. According to the Constitution, his deputy, João “Jango” Goulart, would take over the vacancy. But the military had another idea: Jango would not take office. They were ministers Odílio Denys, of War, Silvio Heck, of the Navy, and Grün Moss, of the Air Force.

In Rio Grande do Sul, Governor Leonel Brizola, also a Labor and Jango’s brother-in-law, reacted: the Constitution would be fulfilled and Jango was sworn in. He summoned the Military Brigade, armed volunteers, formed the Legality Network, excited the gauchos and, soon, a large part of the Brazilians. The generals warned that if Brizola did not retreat, the Piratini Palace would be bombed. At that moment, Brazil entered the anteroom of the civil war.

Article | Campaign for legality: an episode of struggle to defend the Constitution and democracy

In the cellars of the palace, the reporter for Última Hora, Carlos Bastos, then 27 years old, covered the events that electrified the country and attracted the attention of the world. Here, he tells what he saw and felt in those days of brutal tension in the basements of Piratini.

Check out the exclusive interview to Brasil de Fato RS:

Brasil de Fato RS – As a political reporter but also an admirer of Brizola, what was it like to separate the journalist from the activist at a time like that of Legalidade? Or was it not possible to separate?

Carlos Bastos – I was in charge of radio, newspaper and television newsrooms. I was a political columnist for ten years at Jornal do Comércio. I always tried to act impartially. In Legalidade, however, I was more militant than journalist. The strength of the episode won my full membership.

Legality was articulated through speeches on Radio Guaíba, which became the Network of Legality / Public Domain

BdFRS – In an interview with Jornal do Comércio, you have already mentioned that, in addition to Brazilian journalists, foreign reporters who were in Porto Alegre – Uruguayans, Argentines, English, French, Germans – also joined the cause. How was that?

Bastos – The magnitude of the event thrilled. Both journalists from Rio Grande do Sul and those who came from Rio and São Paulo, as well as foreigners. Everyone incorporated the enthusiasm of the crowd posted in front of Piratini.

“Barretão climbed a table to ask Jango not to accept parliamentarism”

BdFRS – How was the situation in which Luiz Carlos Barreto – today a famous film producer who was then a photographer for O Cruzeiro – led the journalists involved in the coverage of Legalidade to pressure Jango not to accept the parliamentary solution negotiated with the military for him to take possession?

Bastos – I remember as if it were today: Barretão, who was a reporter for the magazine O Cruzeiro, climbing onto a table and urging journalists to make an appeal to João Goulart not to accept the implementation of parliamentarism. That’s right after Jango waved to the crowd and didn’t speak. More than a hundred journalists moved to the residential wing of the palace. And Jango came to the door to welcome them and then Luiz Carlos Barreto, Tarso de Castro and Flávio Tavares took the floor. Jango said he wanted to avoid bloodshed.

:: “Brizola is missing”, highlights leaders who lived with the former governor of Rio ::

BdFRS – Brizola made a big speech on August 28, when the Piratini Palace was under threat of bombing on the orders of the generals. That’s when he says he was surrounded by journalists who refused to leave and asked him for weapons to resist. It is said that a crowd surrounded the palace to support him. How was that?

Bastos – For me, it was the most impactful speech of Brizola’s entire political career. He started talking at 11 am and ended around noon. In this speech, he revealed that the command of the Third Army had received orders from Brasília to bomb the Piratini. When Brizola began his speech there were five thousand people in front of the palace. An hour later, having said that the palace could be bombed, there were more than 50,000 people. This demonstrates the politicization of the people of Rio Grande do Sul… 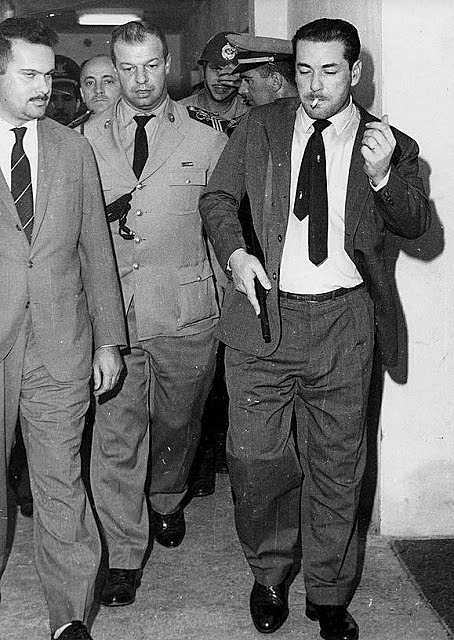 BdFRS – In the same speech, Brizola criticized the Minister of War, Marshal Odílio Denys, for saying that accepting Jango’s inauguration would be to opt for “communism”. Brizola calls the argument “puerile”. This talk of “communism” remains current in Brazil despite the end of the cold war. After a while, did you imagine that this same argument would be used again as it happens today?

Bastos – The scarecrow of communism was used in 1961 and then in 1964 and is still used today, despite the fall of the Berlin Wall and the collapse of the Soviet Union.

BdFRS – Is it possible to say that the radio and its use by Brizola at that historic moment with the constitution of the Legality Network, was decisive in preventing the coup? Without Guaíba radio, which the governor requested, would the 1964 coup be brought forward by three years and would Brizola end up in prison or dead?

Bastos – The Legality Network was fundamental to the movement’s success. It happened that, on Saturday night (August 26, 1961), Brizola sent to the radios, as a paid article, the pronouncement of Marshal Henrique Lott in favor of Legality. As the Farroupilha, Itaí, Difusora and Gaúcha radios carried out the dissemination, the personnel of the III Army removed the radios from the air. This episode was revealed by (journalist) Hamilton Chaves to Brizola on Sunday morning. And he revealed that Guaíba radio was the only station that remained on the air, as Dr. Breno Caldas (owner of the Caldas Junior group, to which Guaíba belonged) had denied its disclosure. At the time, Brizola determined the intervention in Guaíba and the creation of the Legality Network, which began operating on Sunday afternoon.

BdFRS – After Jango accepted the parliamentary solution, Brizola no longer used the Legality Network, nor did the new president take office. The distance between the brothers-in-law began to widen there until the break in 1964 with Jango’s refusal to resist the new coup. Or not?

Bastos – From the moment Jango demonstrated that he would accept parliamentarianism, Brizola, who occupied the network’s microphone several times a day, stopped doing so, claiming that Jango was in charge. The divergence between the two was evident, which was aggravated in 1964 by Jango’s choice again to avoid bloodshed.

BdF RS – The commander of the III Army, José Machado Lopes, was another interesting figure in the episode. Commanding 120,000 men in the three southern states, he initially swayed on the side of the coup-men, but changed his position. What prompted you to change?

Bastos – In a call from Brizola to General Machado Lopes, on the night of Jânio Quadros’ resignation, the governor said that he would defend respect for the Constitution. The general replied that he would take the army position. He was forced to change his mind by the legalist position of Generals Oromar Osório, commander of the 1st Cavalry Division, Santiago, Peri Bevilácqua, 3rd Infantry Division, Santa Maria, Sílvio Santa Rosa, 6th Infantry Division, Porto Alegre , Benjamin Galhardo, from the 5th Military Region and the 5th Infantry Division, from Curitiba, and José Garcia, from Uruguaiana. Only General Paz, from Bagé, was against Jango’s inauguration. 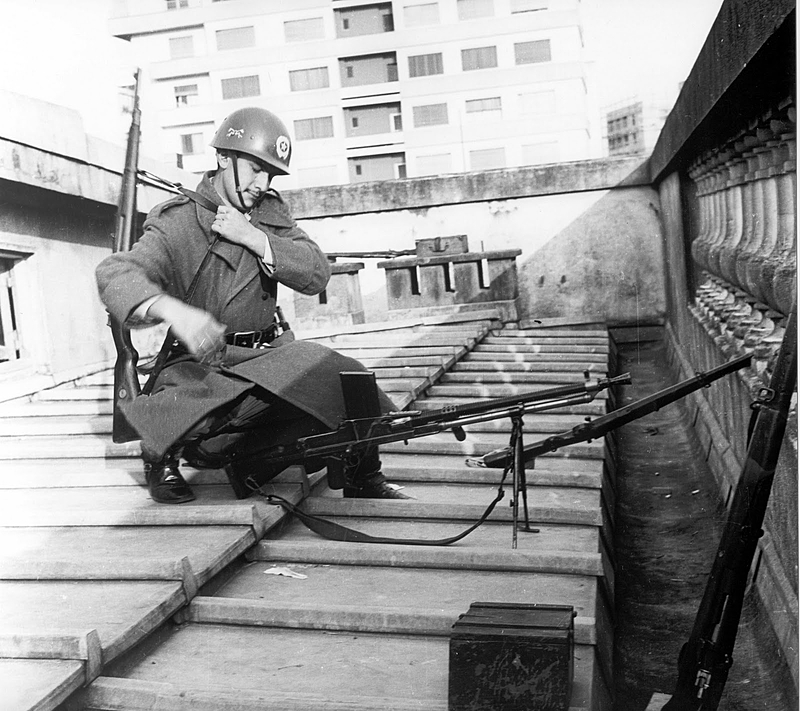 Students tear down park benches to stop tanks from arriving

BdFRS – In that same speech on August 28, Brizola called the minister of war “crazy and insane” and warned that, having attacked the palace and imposing the coup government, “guerrillas will arise in the interior to defend honor and dignity ”. With the bombing approaching, how was the environment in the basement of the Palace, where were the journalists?

Bastos – It was a tense environment. How not to be afraid at a time like this? But everyone held on tight. Journalists had then incorporated the condition of militants of Legality.

:: Five movies and books to help understand the military dictatorship in Brazil ::

BdFRS – How did those tumultuous days when the Piratini bombing and the eventual start of a civil war marked you as a person? As far as I know, the people were armed, slept there and drank a soup that was made there too.

Bastos – The most striking facts for me were Brizola’s speech with the denunciation (of the threat) of bombing the palace; the formation of the Legality Network and its bulletins in English, French, Spanish, Italian, German and Arabic; the rebellion of the Air Force sergeants (at Canoas Air Base, refusing to comply with bombing orders); the students tearing down the benches from the square (of the Matriz) to prevent the arrival of the tanks; the crowd’s reaction when Jango only waved and didn’t speak; the thousands of people who sign up as volunteers. My character was Secretary of Justice Francisco Brochado da Rocha. When General Machado Lopes was limping beside the car – he had lost his footing in the taking of Third Army HQ in the 1930 Revolution – he shouted “Long live General da Legalidade”…

BdFRS – Today we understand that 1961 would be an anticipation of 1964. Did the Gaucho resistance delay the coup for three years?

Bastos – 1964 would be anticipated if there were no Legality.

BdFRS – My impression is that Legality was, after the Revolution of 1930, the great moment of prominence of Rio Grande in national politics of the last century…

Bastos – There is no doubt that the great rebellion after Getúlio in 1930 was the Legality commanded by Brizola. 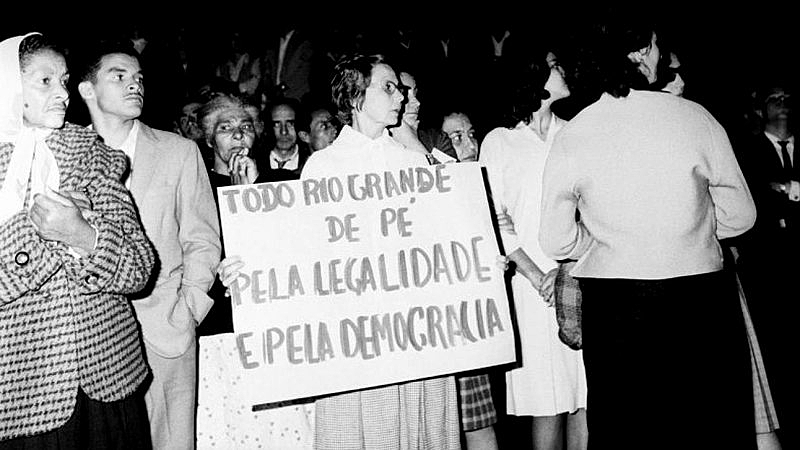 Legality had broad support from the population / Public domain

The following year, Brizola was the most voted federal deputy in the history of Brazil

BdFRS – Brizola has had a long political career with other great moments, but the resistance in August 1961 was the first time that a civilian leader in Latin America had defeated a military coup. Was it there that the mystique of Brizolism was forged?

Bastos – A year and a little later, Brizola was unable to elect his successor as a result of Fernando Ferrari’s open dissent in labor by Fernando Ferrari (Ferrari founded the Movimento Trabalhista Renovador – MTR) running as a candidate for the Gaucho government, reducing the vote of the Brizolist PTB and favoring victory by the conservative Ildo Meneghetti. On the other hand, he was the most voted federal deputy in the country, running in Rio de Janeiro. One in four of the Cariocas voted for Brizola. There he planted the seed for 20 years later, upon his return from exile, to be elected governor.

BdFRS – What lesson does Legality leave for Brazil today when the country faces, every day, a new threat of a military coup?

Bastos – I think circumstances are different today. The time is different. There is no more cold war between the United States and the Soviet Union. The international scenario is different and prevents any coup movement.