Symbol of resistance to the military dictatorship, Manoel da Conceição died this Wednesday morning (18) at the age of 86 in Imperatriz, Maranhão, where he lived the last few years with his family in a house with open doors to social movements of the region.

Persecuted, tortured and exiled, Mané da Conceição, as he was better known, dedicated his entire life to organizing the struggle for democracy and for the rights of peoples in the countryside and forests.

The firstborn of the couple Maria Leotéria and Antônio Raimundo, Manoel da Conceição was born on July 24, 1935, in the village of Pedra Grande, in the municipality of Coroatá, state of Maranhão.

Until he was ten years old, he did few garden services, a natural task for children in the region. That’s because he dedicated himself to taking care of his younger siblings and learning another trade from his father, that of blacksmithing.

Alongside Lula in the Metalworkers Union, with whom he articulated the founding of the Workers Party / Reproduction

As a teenager, he started taking care of the family’s plantations, in addition to working alongside his father for the landowner João Candeia da Rocha, dealing with plantations in the village of Lajinha, near Pedra Grande.

It was the 1950s and Maranhão received more than one hundred thousand immigrants from Pernambuco, Paraíba, Rio Grande do Norte, Ceará, Piauí and other states affected by drought in search of free land to live.

Between one eviction and another, persecution of land grabbers and massacres of rural workers in the region, the family dispersed and Mané went to meet his father in the village of São José do Tufi, in the municipality of Pindaré Mirim, an area of ​​extensive vacant land where dense forests abounded. and rivers.

It was in Pindaré Mirim that he established himself as a respected farmer, blacksmith, and assiduous member of the evangelical church and met Rita Pinto, a young woman from Piauí, whom he married and had their first two children, Raquel, in 1961 and Manoel Filho, in 1963. 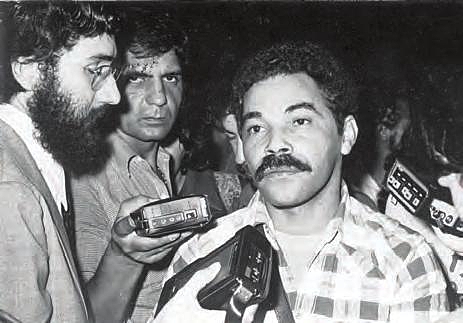 During this same period, a group from the Basic Education Movement (MEB) visited the region in search of people who showed a spirit of leadership to participate in a course on literacy, unionism, agricultural production and other problems that affected the lives of rural workers .

Mané was one of the nominees to participate in the course, which began in August 1962 in the municipality of Santa Inês amid intense conflicts over land ownership. The themes instigated in rural workers hopes for alternatives and there they signed a commitment to the fight for better living conditions.

Back in Pindaré Mirim, he passed on the new knowledge and engaged, in fact, in the peasant struggle through the creation of literacy schools and heated debates that gave rise to the Union of Autonomous Rural Workers of Pindaré Mirim, the first in this form in the Maranhão.

The foundation was marked by a large assembly held in October 1963, in the municipality of Santa Inês, with the presence of more than a thousand people decided to join – who became direct targets of land grabbers in the region. 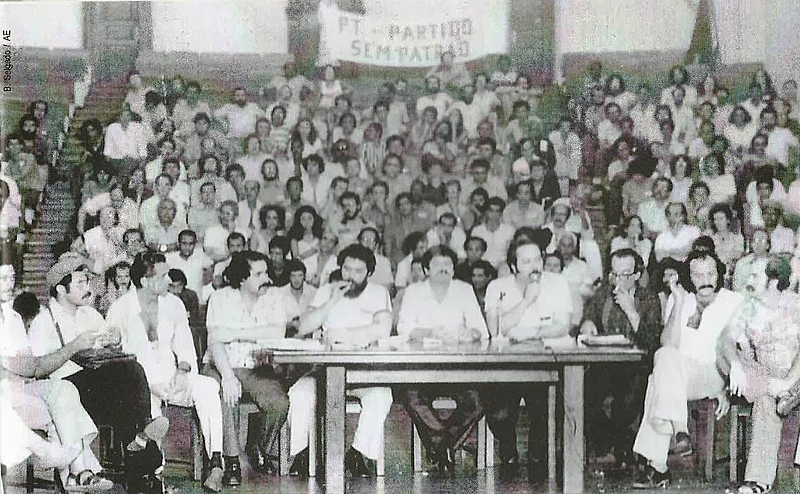 PT founding act in 1980, at Colégio Sion, in São Paulo (Manoel is second on the left) / Reproduction

If, on the one hand, the workers organized themselves for better living conditions, on the other, jagunços mounted horses and loaded their rifles for the new times in the countryside.

The workers’ organization gained momentum, people from other municipalities joined and in the following month, the number of members jumped from one thousand to four thousand, a historic moment when they decided to march together to the local authorities.

In February 1964 Manoel da Conceição was elected president of the union, at 29 years of age. Soon the news of struggle and resistance in the region stimulated the creation of new unions and Manoel becomes the main enemy of the farmers in the region.

In the same year, a military coup was initiated in Brazil and the unions were closed and their documents sealed. That’s when Manoel starts to live between hiding, persecution by the State and the responsibility of organizing the struggle for resistance.

The studies of the young peasant took another form and was now based on the guerrillas for the armed confrontation against the military government, with the sound of radio Havana. More radical and determined to face the structures of capitalism, a new Manoel da Conceição is forged, breaking with the hierarchy of the evangelical church and leaving the family home to break the fences along the agricultural frontiers of Maranhão.

Still under the presidency of the union, he resists a bloody invasion of the police to the Pindaré Mirim union and defends the workers, when he was the victim of two rifle shots to his right foot, dragged and taken away by police officers.

Imprisoned in Pindaré Mirim jail for about six days and without medical assistance, the information spread and Manoel was transferred to medical care in São Luís, but the infection had already reached such a critical point that his leg had to be amputated.

With an irregular cut and no healing, Manoel was taken to São Paulo for medical care with the support of rural workers and social movements, where he underwent a new amputation, now close to his knee.

The situation caused an uproar and, fearing a popular uprising, the then governor of Maranhão, José Sarney, offered air travel back to the state, medical treatment, political positions and money, in exchange for silence and support.

With all the proposals rejected, Mané started to use a mechanical leg and stamped in his history the mark of his resistance under the motto: “My leg is my class!” and with the support of Ação Popular (AP) militants, it intensified the peasant struggle even more and started to travel to other states and countries for studies and lectures.

With the accumulated set of enemies and constant persecution, Mané was imprisoned for more than three years and severely tortured, until he was exiled in Geneva, Switzerland, with the support of human rights organizations and Amnesty International.

Refugee in Geneva for three years and seven months with his partner, activist and social worker Denise Leal, during which his youngest daughter, Mariana Nóbrega, is born, Mané dedicates this period to studies and lectures in countries such as France, Belgium, Italy , Germany, Netherlands, Switzerland, Sweden, Denmark, Norway, Spain, Portugal and Algeria, in Africa. 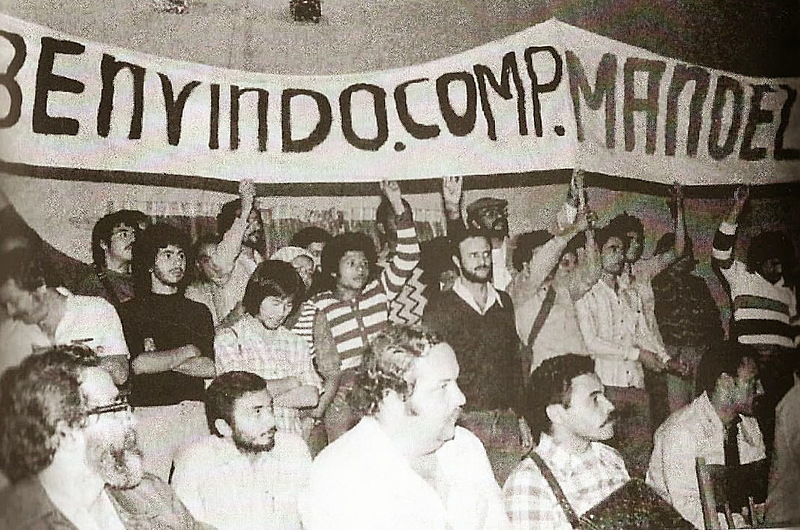 With the amnesty in 1979, Manoel da Conceição returns to the country and participates in the articulation of numerous associations, entities and social movements for popular organization, such as the articulation of the Landless Rural Workers Movement (MST) in the region and the foundation of organizations such as the Workers’ Single Center (CUT), the Rural Worker Education and Culture Center (CENTRU) and the Workers’ Party (PT).

Over the years, he has been widely honored in all regions of the country by non-governmental and governmental entities, including the Chamber of Deputies, the Federal Senate and the Federal Government, and receiving the title of Doctor Honoris Causa by Unisulma , in Imperatriz, and the Federal University of Maranhão, in São Luís.

From 1984 onwards, he began to live with his family in Imperatriz, where he dedicated himself to taking care of the training and organization of rural workers throughout the southern and southwestern regions of Maranhão and remained until the last years of his life.

With his physical and psychological conditions already weakened after the age of 80 due to the consequences of years of torture, Manoel receives the unconditional support of his partner Denise Leal, who at his side followed the mission of stimulating the organization of popular struggle in the region. With the doors of the family house always open to political leaders and social movements, he listened attentively and occasionally remembered his times of rebellion and struggle. 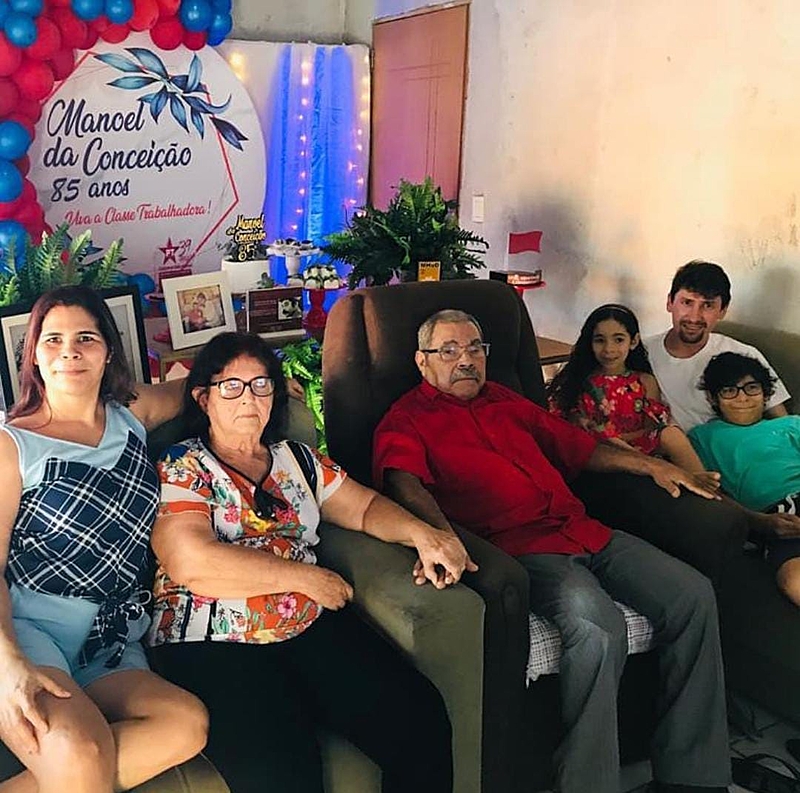 Manoel da Conceição underwent surgery to remove a gallstone on July 16, and with his health already failing, remained hospitalized at the Hospital Macroregional de Imperatriz for four weeks, which resulted in other complications, until the development of an acute bronchopneumonia, with need for intubation, which he did not resist and died around 7am on August 18th.

The body of Manoel da Conceição will be buried in honor of social movements this Thursday afternoon (19th) in Imperatriz, amidst President Lula’s agenda for the Northeast, who, upon stepping on Maranhão soil, paid his respects alongside Governor Flávio Dino .

In one of the last interviews granted, in 2014, Manoel da Conceição was questioned by the journalist from Brazil in fact Márcio Zonta: “What makes a man who reaches 80 years old with so much history?”. In response, he said: “I give it to my class so they can continue my story!”

* With information from the work “Manoel da Conceição, Sobrevivente do Brasil”, special edition celebrating the 80th anniversary of Manoel Conceição, by Adalberto Franklin (2014).