Civil servants marched this Tuesday (14) in Brasília (DF), against the administrative reform of the Bolsonaro government, whose report can be voted on on Thursday (16), in the commission that evaluates the Constitutional Amendment Proposal (PEC) 32. In a walk that crossed the Esplanade of Ministries to the front of the National Congress, civil servants’ leaders complained about the removal of the measure from the agenda.

“This is the first flag: withdrawal. But, as there is a commitment by the president of the Chamber and by the rapporteur himself to vote on this amendment with the federal government, we are also pressuring parliamentarians to reject it, if it is put to the vote,” the president of Central Única told Brasil de Fato of Workers in the Federal District (CUT-DF), Rodrigo Rodrigues.

With the Legislature hegemonized by groups with a neoliberal tendency, organizations see street acts not only as a form of pressure on parliamentarians, but also as a means of facilitating social dialogue.

The idea is to intensify the attempt to popularize the campaign against the PEC through the dissemination of information about the content and possible consequences of the proposal, if it is approved.

“What we are saying is that the administrative reform, for the public servant, will change the work relationship with the employer, which is the State. But, more than that, it will affect the rights of the working class and society as a whole, because it will greatly weaken the provision of public services”, emphasizes Rodrigo Rodrigues.

The fight against the PEC is echoed especially among parliamentarians from the opposition camp, such as members of the acronyms PT, PCdoB and Psol. The PSB, for example, released a note this Tuesday afternoon (14) informing that the bench closed an issue against the reform, which signals a joint rejection of the group’s deputies to the text. 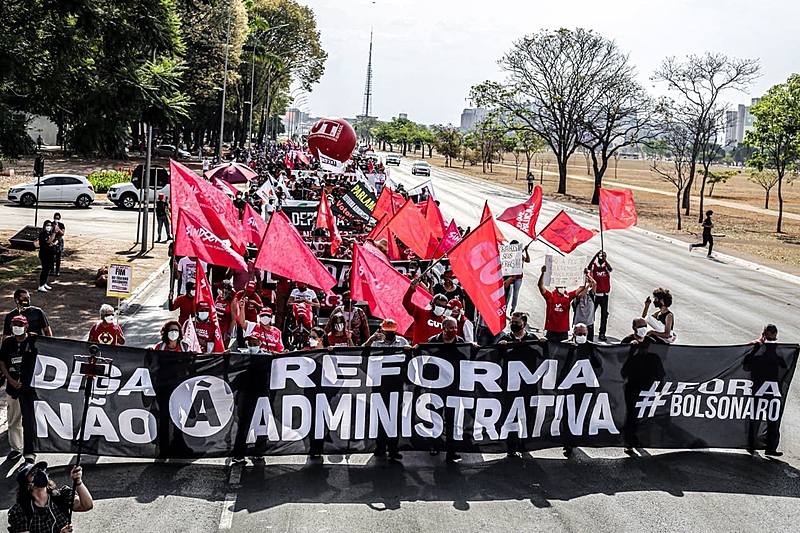 March of protesters followed the Esplanada dos Ministérios, in Brasília (DF), and blocked part of the road to protest against PEC 32 / @scarlettrphoto/@sintrajud

“The proposal presented deepens the dismantling of the Brazilian State by allowing the privatization of the public service and the hiring of civil servants without holding a public tender,” said the leader of the bench, Danilo Cabral (PE), citing the possibility foreseen in the PEC for that so-called “cooperation contracts” be signed.

The idea is that these agreements unite public agencies and private entities for the execution of public services and even foresees the sharing of human resources and the physical structure. Because of this, it is one of the most targeted points of Bolsonaro’s reform.

Concentrated in front of one of the annexes of the Chamber of Deputies, the protesters pressured the parliamentarians to remove the PEC from the agenda / @scarlettrphoto/@sintrajud

The reform affects public servants at all levels of activity – municipal, state and federal – and from the Three Powers, excluding only categories such as judges, prosecutors and parliamentarians.

On the government side, the economic team’s speech is that it would be advantageous to approve the PEC 32 to reduce the costs of the public sector, including through the reduction of expenses with future employees. The agenda is one of the main points on the neoliberal agenda of Economy Minister Paulo Guedes.