Of the 106 public universities across the country, 67 federal and 39 state, only 20% offer quotas for entry for quilombolas. These higher education institutions that offer quotas are concentrated in just eight states, out of 27 in the federation. They are: Bahia, Ceará, Goiás, Mato Grosso, Pará, Rio Grande do Sul, Santa Catarina and Tocantins.

The data are from a survey carried out by the Affirmative Action Multidisciplinary Study Group (Gemaa), linked to the Institute of Social and Political Studies of the State University of Rio de Janeiro (IESP-UERJ), with information available until 2019. public schools hold up to 384,000 students. Of this total, only 2,035 places are given to quilombolas, or 0.52%, according to the organization.

In Brazil there is no legislation that obliges public universities to reserve places by quotas for the quilombola population. The institutions that adopted this affirmative policy did so, causing changes in their internal regulations, as explained by researcher Jefferson Belarmino de Freitas, one of those responsible for the Gemaa survey.

“This means that the governing body of these institutions is more progressive and flexible to quilombola demands. Another important factor is that we observe that the largest number of vacancies occurs in states where this population is more organized”, points out Freitas, Ph.D. in sociology from IESP-UERJ.

In absolute numbers, universities in Bahia are the ones that offer more places to quilombolas, 599. Then, Pará, 482, and Goiânia, 421. It was precisely in Bahia that the first specific policy for quilombos took place, in 2005, in Federal University of Bahia (UFBA).

However, crossing the total number of vacancies offered by quotas and the amount made available to quilombolas within this group, Bahia drops to fourth place in the country, with only 2.3%. In first place is Tocantins (4.5%), then Goiás (3.4%) and Pará (2.8%). 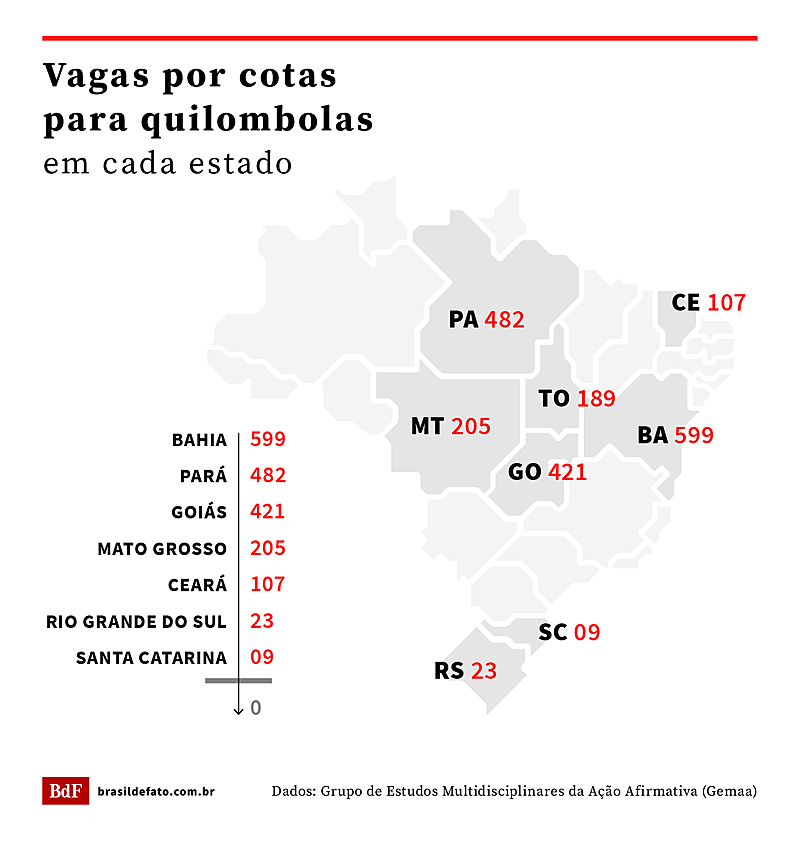 Vacancies per quota for quilombolas in each state / Brazil de Fato

Biko Rodrigues, national articulator of the National Coordination of Articulation of Quilombos (Conaq), regretted and confirmed the data.

“It would be important for the quotas to be extended to the entire country. Some states are leading the way, such as Pará and Tocantins, we see this in the territories. But it is still a long way from the reality of our people. In São Paulo and Rio de Janeiro, for example, where we have a large presence of quilombolas, the reality is very bad, we don’t access universities.”, he explains.

Fluminenses have 31,354 students in their federal and state universities, with 15,447, or 49%, for quota holders. However, none of these reserves were intended for the population from the quilombos.

Among the 29,856 students at São Paulo’s federal and state universities, 11,669, or 39%, are quota students. As in Rio de Janeiro, there are no affirmative policies for the quilombolas.

The Northeast (706) is the Brazilian region with the highest number of vacancies for quilombolas, followed by the North (671), Midwest (626), South (32) and finally, the Southeast, which does not have processes for entering the population from quilombos in their public universities. 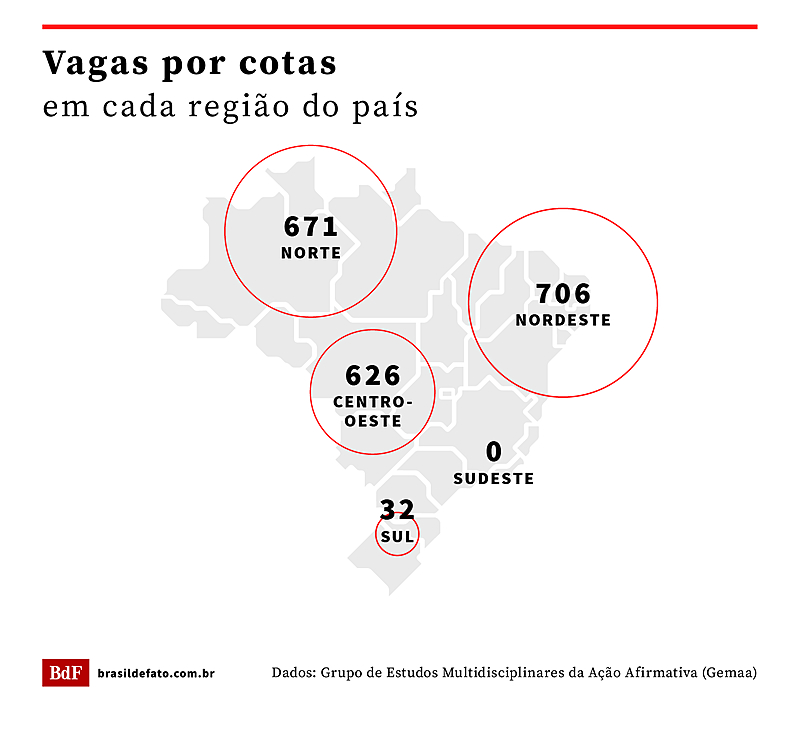 In the text of the study, the body of researchers makes reservations about the need to distinguish the places offered to different groups and why it would not be convenient to assume that quilombolas would be included in racial quotas.

“The adoption of educational content that is part of the way of life of quilombola communities is a demand of activists and intellectuals who work in the quilombola cause. Oftentimes espousing a decolonial perspective, such agents emphasize that the quilombola reality cannot be entirely submitted to Western and (falsely) universalist systems of knowledge”, concludes the study.