A plaque in honor of Marielle Franco was inaugurated in Buenos Aires this Tuesday afternoon, at the Rio de Janeiro subway station, in the Caballito neighborhood. Symbolically, the act takes place on the 14th, the day in which 3 years and 6 months have passed since the murder of the Rio councilor by the Psol.

The inauguration was carried out by members of the Passarinho collective, made up of progressive Brazilians in the country, and Congresswoman Maru Bieli (Frente de Todos – FdT), author of the bill to install the sign.

Yellow flowers and LGBT flags were placed in front of the sign, and singer Shirlene de Oliveira set the opening act to music by interpreting the song “If this street were mine”, in Spanish and Portuguese.

Inauguration of a plaque in honor of Marielle Franco in Buenos Aires. / Disclosure

Militant and member of the Passarinho collective, Danielle Santana highlighted, moved, having met the councilor. “Marielle Franco is a symbol of a long tradition of black women who fought and resisted in Brazil and throughout Latin America. To pay homage to these women is to guarantee that we will remember their struggles for many years, it is to guarantee the right to memory.”

And he added: “It is saying that we will be resistance, that Marielle is seed and lives in each one of us who claim and carry out her fight”, he concluded.

“From today onwards, its story breaks out in our daily journeys on the city’s subway,” stated Deputy Bieli. “It is an exercise in feminist memory that arises from networks built between peoples.”

“Here and there, we will continue asking for justice and building a large homeland where we can all fit,” added the deputy. 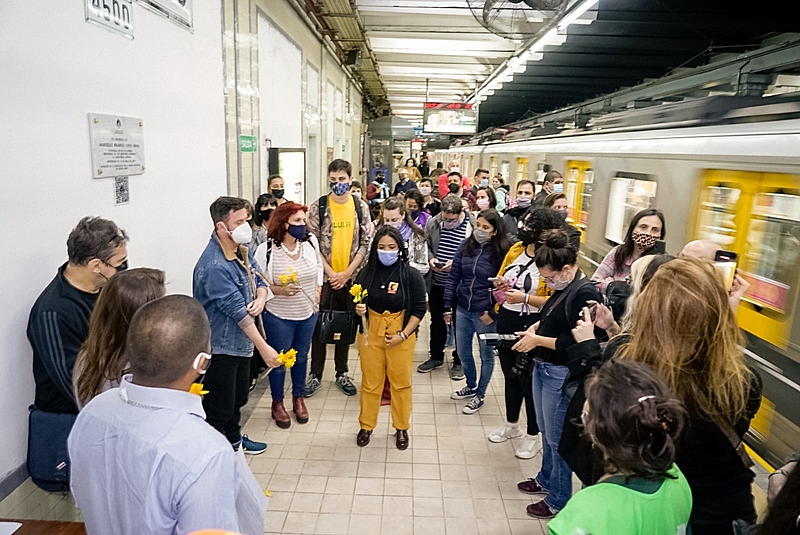 The activist Danielle Santana speaks at the Rio de Janeiro station, in the neighborhood of Caballito, Buenos Aires. / Disclosure

Also present at the event were Beto Pianelli, Secretary General of the Association of Metro Workers, the Buenos Aires legislators Matías Gallastegui and Laura Velasco (FdT), and the candidate for legislature from Buenos Aires, Paula Arraigada (FdT).

The board had been approved in March, but could not be installed until then due to the interdiction of the A-line station during the pandemic.