Journalist Eliane Silveira, who is part of the coordination of the Campaign’s state committee, recalled that, in addition to being winter in Rio Grande do Sul, where there were storms and even snow, the state is still “in a cold state”.

“For this reason, we are proposing to organize the ‘Spring of Democracy’, between October 16 and 23, with the Popular Referral, which will replace the referendum that the governor did not want to hold. If he did not want to listen to the people, bad luck about it, the people will speak and express their opinion in October,” stated Eliane. She refers to the removal of the obligation to consult the population in case of sale of public companies.

The mobilization is being called the “Spring of Democracy”, as the regional committees will mobilize society for the public consultation to be held in October. Eliane informed that there are already committees in all regions of Rio Grande do Sul and that they are now working towards the constitution of municipal and local committees. She also reinforces that it is not necessary any kind of authorization to carry out meetings and activities.

The campaign coordination also informs that daily agendas are scheduled and the constitution of the Metropolitan Region Committee, the Jacuí Delta, the Rio Pardo Valley and the North Region is scheduled. In addition, every Wednesday at 7 pm, the meeting takes place online of the State Committee.

This Saturday (28), there will be the second Plebiscite training workshop. To participate, simply request the transmission link through the Facebook page “Popular plebiscite RS“. The training will be held with economist Marcelo Manzano, with the theme “The Necessary State”

Rede Soberania and Brasil de Fato RS participated in a collaborative coverage of the launch of the campaign:

In Porto Alegre, the launch act was held this Monday from noon, on the Democratic Corner. Several parliamentary and union leaders, as well as activists from popular movements were present, giving speeches and distributing leaflets.

The act was coordinated by the vice president of CUT-RS, Everton Gimenis. “We are calling this plebiscite the spring of democracy because it will take place from October 16th to 23rd. And it is very important that we do this spring because we know that the elites of our state and our country do not want to listen to the people” , stressed.

The president of CUT-RS, Amarildo Cenci, stated that “this campaign will be a journey of a lot of conversation, as this plebiscite has this expression, this symbol of dispute over an opinion on how the state should work. But, in addition to the dispute over the role of the state, it is a tool to develop a connection and relationship with the population, who are chasing jobs, income, a plate of food”.

For the president of the Central of Workers and Workers of Brazil of Rio Grande do Sul (CTB-RS), Guiomar Vidor, Brazil is going through a period where public property is being delivered practically at a “banana price”. It also recalls that the trade union movement has already experienced this at another time in history, during the government Antônio Britto (at the time at the PMDB) and that the situation only got worse, rather than better.

For state deputy Pepe Vargas (PT) the people need to debate privatizations. “We are going to hold a Popular Plebiscite so that the population of Rio Grande do Sul can say what they think about privatizations. Eduardo Leite said in the campaign that he would not privatize Banrisul and Corsan, but he lied. Now it is the people who need to decide.” .

Miguel Rossetto (PT), who ran for vice mayor of the capital in the 2020 elections, welcomed the mobilization that was taking place simultaneously in several municipalities throughout the interior. “This plebiscite opens up a possibility for the people of Rio Grande do Sul to take a stand and debate the future of our companies and the assets of the people of Rio Grande do Sul, so important in a resumption of growth. Banrisul, Corsan, CEEE, Procergs, are companies that had and will have a very important role in the recovery of the economy, in the generation of jobs and income”, stated Rossetto. The PT member also considers that the privatization of Corsan, at this time, is unacceptable, as it is a profitable company and has the capacity to universalize sanitation throughout the state.

The city councilor of Porto Alegre Daiana Santos (PCdoB) was also present and spoke, comparing the privatization of public companies in the state with the privatization process of the public urban transport company in the capital, Carris. “Those who raise this agenda do not want to dialogue with reality, for the most obscure interests. The population needs to understand that the same people who do not want to dialogue with the population today are the ones who will be in the communities in the next elections to ask for their support”, said the councilor.

Several cities in the interior carried out simultaneous launch activities

Across the interior, several cities where a local Committee is already established carried out activities to launch the Plebiscite campaign. In Três Passos, for example, a distribution of leaflets began around 11:00 am, at Praça da Matriz.

In Três Passos (RS), the activities of the local Committee took place in parallel with the mobilization in the Capital / Photo: Cleonice Back

In Caxias do Sul, in Serra, the launch took place at Praça Dante Alighieri, where workers from various entities organized in the city’s Municipal Committee took a banner and distributed leaflets to dialogue with the population. It was informed that the population’s reception was very good, especially among young people. 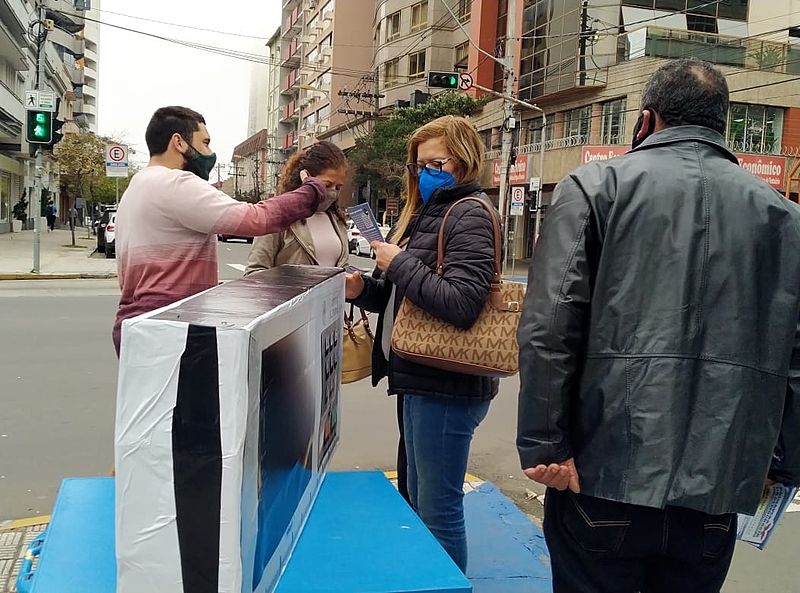 In Caxias do Sul (RS) leaflets were distributed to inform the population about the realization of the Popular Plebiscite / Photo: Daniela Fagundes

In Taquara, in the Metropolitan Region, activities also started in the morning, in front of the city’s Banrisul branch. Bank workers distributed leaflets in the area that concentrates the city’s bank branches, in dialogue with the population. 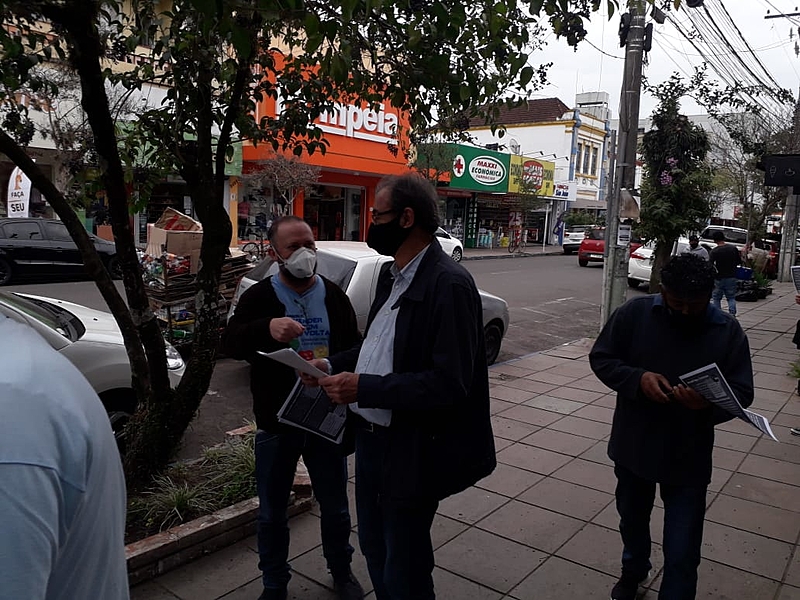 In Taquara (RS), workers were in front of the city’s Banrisul branch to talk to the population about the Popular Plebiscite / Photo: André Walbrohel

In Pelotas, due to heavy rain, workers gathered at the Casa do Trabalhador, a place that hosts several unions in the city. Those who were present followed the launch in the Capital and organized the next steps of the mobilization. Activities were also recorded in Vacaria and Santana do Livramento. 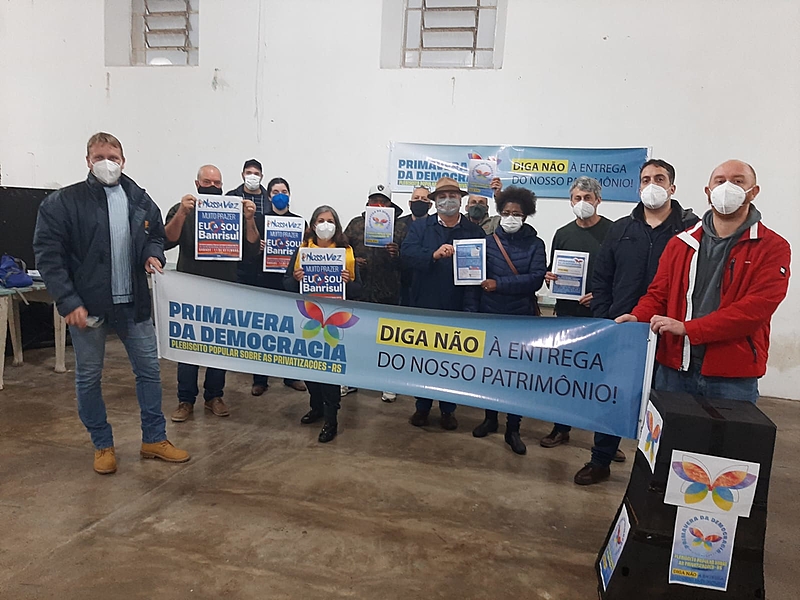 Workers gathered at the Casa do Trabalhador, in Pelotas, to discuss the organization of the Popular Plebiscite in the city / Disclosure