The far-right activist Eduardo Thomaz, one of the leaders of the demonstration that brought together neo-Nazi groups in support of the then federal deputy Jair Bolsonaro, in 2011, on Avenida Paulista, in São Paulo, is one of the organizers of motorbikes and motorbikes in favor of the current President.

Thomaz was one of the public figures of the street demonstration that took place 10 years ago. At the time, he said that the act was motivated by “solidarity” with Bolsonaro, criticized for homophobic statements made during an interview with the CQC program, aired by Bandeirantes TV.

::Video denies pocketnaristas and shows that “motociata” only had 6 thousand motorcycles in SP::

At the time, the then deputy told singer Preta Gil that he would not run the risk of seeing his children in love with a black woman because they would have been well educated. In reaction, neo-Nazi groups called a demonstration in support of the congressman at the São Paulo Museum of Art (MASP).

In an interview with Gazette TV during the demonstration, Thomaz identified himself as a member of the Ultra Defense group. “We are supporting deputy Bolsonaro because he represents the Brazilian family. We have the right to support him,” he stated.

On its website, Ultra Defesa states that its fundamental principles are “God, Brazil and Family”. The members of the group are also adepts of the “Roman Salute”, which is the act of extending the arm forward with the palm of the hand down.

Also present at the act were several neo-Nazi groups such as Kombat RAC. Some identified themselves with clothing, flags and tattoos alluding to Nazism. Leftist groups appeared at Masp to protest against the Nazis, and the Military Police had to make a cordon to avoid confrontation.

Asked about the demonstration, Bolsonaro said he could not be present, but supported the act: “I’m happy if the movement is turned against the proposals that are there, of invading elementary schools simulating homosexuality and preparing our young people for pedophilia ”.

One of the leaders of the demonstration, Thomaz was a candidate for mayor for the PSL in Mairinque, Greater São Paulo, in the 2020 municipal elections. At the time, Bolsonaro was no longer part of the party. Even so, his campaign was referenced in the president.

On social networks, Thomaz also boasts of being one of the organizers of motorbikes and motorbikes in favor of the president. The militant also exhibits a photograph with the chief minister of the Institutional Security Cabinet, General Augusto Heleno.

General Augusto Heleno, chief minister of the GSI, in a photograph with Eduardo Thomaz / Reproduction/Instagram

Remind Nazi acts of the Bolsonaro government and its allies

In March of this year, the Brazil in fact showed moments in which pocketnaristas showed the close relationship that exists between the Brazilian government and the movement founded by Adolf Hitler, responsible for the murder of six million Jews.

The international advisor to the Presidency of the Republic, Filipe Martins, appeared in the TV Senate, behind the president of the House, senator Rodrigo Pacheco (DEM-MG), when he made an “OK” gesture with his hands, but with three straight fingers, in the shape of a W. The gesture is classified by the Anti-Defamation League (ADL) , an entity based in the United States, which fights anti-Semitism, as a form of identification among white supremacists. 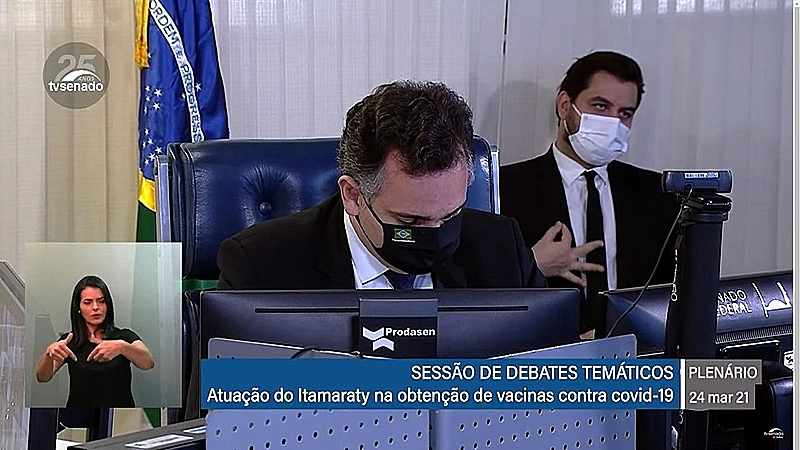 Filipe Martins and the gesture that generated revolt, due to his identification with white supremacists / Reproduction/TV Senado

The most emblematic case, so far, was that of former Special Secretary for Culture, Roberto Alvim, who in January 2020 copied a quote from Nazi Germany’s propaganda minister, Joseph Goebbels, in a speech to social media, to publicize the National Prize for the Arts.

In one of his speeches, Goebbels said: “German art in the next decade will be heroic, it will be fiercely romantic, it will be objective and free from sentimentality, it will be national with great pathos and equally imperative and binding, or else it will be nothing.”

Read more: Roberto Alvim is fired from the Department of Culture after copying Nazi speech

In Alvim’s adaptation, it was like this: “Brazilian art in the next decade will be heroic and will be national. It will be endowed with a great capacity for emotional involvement and will be equally imperative, since it is deeply linked to the urgent aspirations of our people, or else it will be nothing.” 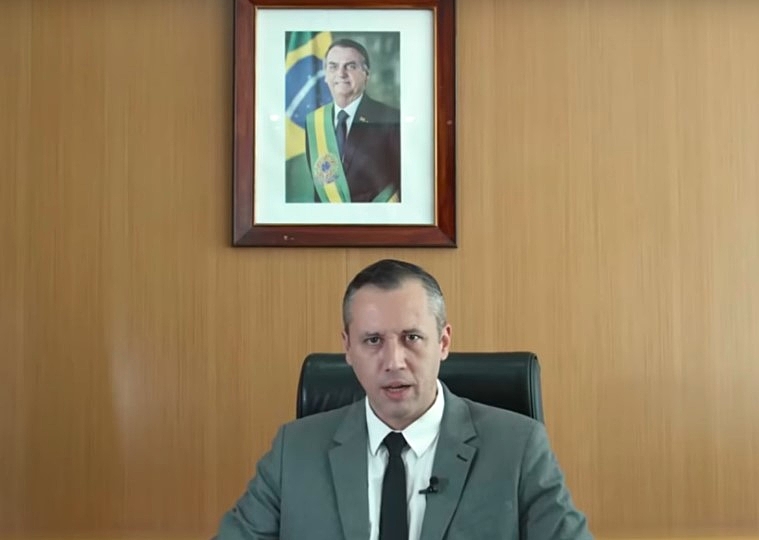 On May 17, 2020, former comrades-in-arms from Bolsonaro, when the president was a paratrooper in the Armed Forces, went to the Planalto Palace to greet the president. However, at the moment of greeting, they stretched their right arm in the air and shouted “Bolsonaro it’s us”.

The episode was seen by experts as an allusion to Nazism. Among them, Lilia Moritz Schwarcz, historian, doctor in anthropology and full professor at the Faculty of Philosophy, Letters and Human Sciences (FFLCH) at USP. In an article published in Zum Magazine , she makes the relationship between the gesture and the German movement.

“Paratroopers, dressed in military clothes, sing a variation of Heil Hitler from the cry of ‘Bolsonaro it’s us’, sealing a kind of collective commitment, based on the ‘common us’, around the president’s ideals. In this case, however, the gesture does not evoke a religious ritual, but reinforces a military commitment in a nation that is not at war. In this sense, it indicates a possible war on the political horizon, and signals loyalty to the leader”, explained Shwarcz. 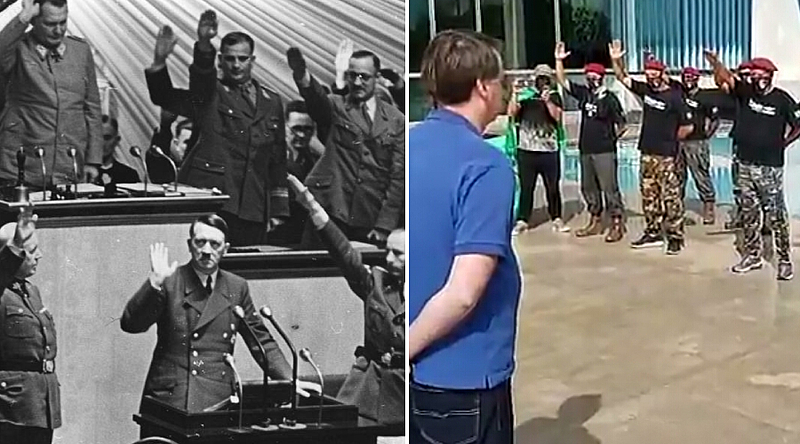 For specialists, there is no doubt about the gesture reference / Photo: Reproduction

Jair Bolsonaro and his son, Federal Deputy Eduardo Bolsonaro (PSL-SP), starred in one of the episodes. In May 2020, the president drank a glass of plain milk during a live stream on his Facebook profile.

Immediately, researchers associated the gesture with a practice of American neo-Nazi movements, which started drinking white milk as a symbol of white supremacy. A day later, Eduardo Bolsonaro mocked his father’s criticisms and posted a photo of actors Lázaro Ramos and Thais Araújo drinking pure milk. Blogger Allan dos Santos, an auxiliary line of pocketbooking on social networks, repeated the gesture in a live broadcast on his channel.

“White nationalists demonstrate by drinking milk to call attention to a genetic trait known to be more common in white people than in others – the ability to digest lactose as adults. It is a racist attempt to rely on ‘science’ to differentiate and justify the ‘white race’. But as already proven and explained by all science: there is no genetic evidence to support any racist ideology. What there is, in fact, is a crude and hate-motivated government,” explained anthropologist David Nemer at the time.

“The extremism of Bolsonarism is so crude that they appropriate everything from Alt Right (white American extremists) and belatedly – ​​since it started in the US in 2017”, he joked. 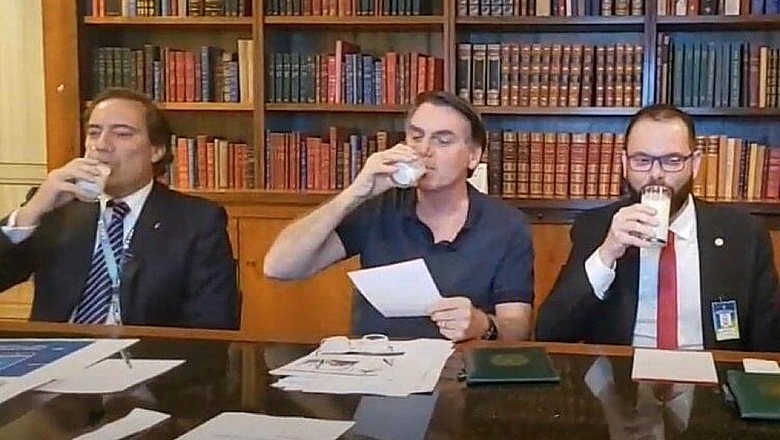 A loyal supporter of Jair Bolsonaro, militant Sara Geromini started to use the surname “Winter” to honor Sarah Winter, an English woman turned Nazi spy and member of the British Union of Fascists.

In their homes, the original Winter flew the Nazi flag and was never punished for the barbaric crimes committed by the Nazis, unlike other Englishmen who linked themselves to Hitler’s government.

:: Sara Winter, far-right agitator, is arrested by the PF in Brasília ::

Winter, the Brazilian, organized a group called “300 do Brasil”, which aimed to “fight corruption and the left in the world”. During the month of May 2020, the group maintained a camp on the Esplanade of Ministries. On the marches of the movement, they carried torches and dressed in white. The aesthetic resembled the Ku Klux Klan (KKK), American white supremacist movement. 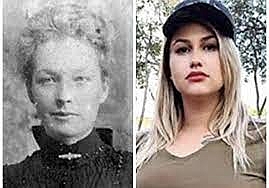