In the week in which the Family Farming Day (23) and the Farmer’s and Farmer’s Day (28) were celebrated, the Regional Forum of Popular Social Organizations and Movements in the countryside and the City of Southwest Paraná and the Resistance and Solidarity Committee donated eight tons of food, clothing and blankets for families in southwestern Paraná.

Part of the food, clothes and blankets collected benefited more than 100 families from Quilombo Adelaide Maria da Trindade Batista and 80 families from an urban occupation, both in the municipality of Palmas.

:: Family Farming Day is marked by the donation of 48 tons of food in Paraná ::

The solidarity action was the result of a campaign that aimed to collect food from family farming, those affected by dams, settlers, campers, cooperatives and urban workers.

“It’s this fighting spirit that moves us every day, it’s this union of movements in favor of those less favored by luck that moves us more and more every day,” said quilombola Rosemary Ferreira da Silva Camara.

In Quilombo, there was a moment of reflection on the resistance and struggle of rural and urban workers, the inequality that is aggravated by the Covid-19 pandemic, the need for solidarity between workers and the blessing of food, for Father Adriano Matana. 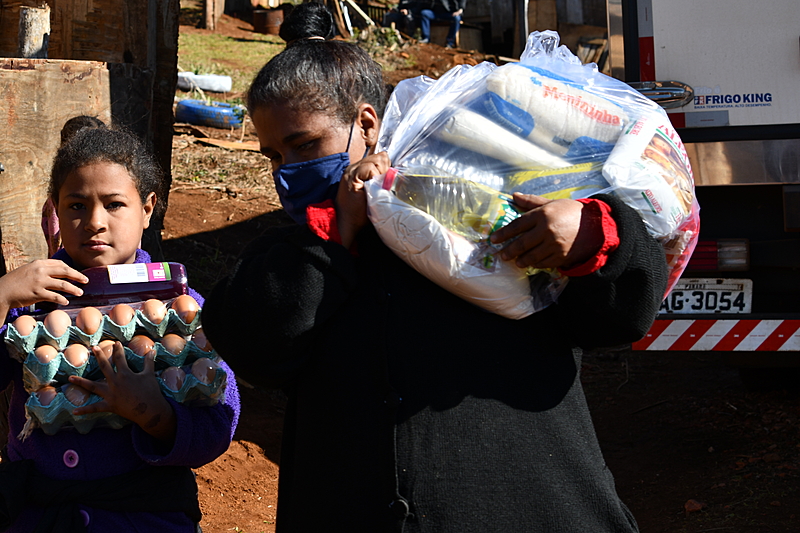 Donations were delivered in the municipalities of Palmas, Marmeleiros and Francisco Beltrão / Photo: Geani Paula

With the beginning of the covid-19 pandemic, inequality worsened, rights were withdrawn and workers’ unemployment increased. In the southwest region this is already quite evident, and solidarity actions are also aimed at denouncing these rights violations.

“It is important to say that we continue the fight. It is a right for families to have a job, a decent life, conditions to live well,” emphasized Paulo Roberto Czekalski, coordinator of the Regional Forum.

All donations were made in dialogue with organizations, popular movements and urban entities. All prevention protocols for covid-19 were followed for making donations.

This is the 6th solidarity action that the Regional Forum has organized since April 2020. So far, around 50 tons of food have been collected and donated, benefiting more than 1600 families in the southwest region.