In October, the Conversations program comes to an end, which over four years has given visibility to literary, artistic and cultural works organized outside the commercial axis. The magazine is one of the few programs on Rede Minas that has a black presenter in front of the screens, and also for this reason, the extinction of the content generated revolt among viewers and journalists.

Collective of black journalists Lena Santos protests against the broadcaster

The station’s decision was publicized by the collective of black journalists Lena Santos. In a letter sent to the Editorial Board of Rede Minas and to the president of Empresa Mineira de Comunicação (an entity that includes state public radio and television companies), the collective states that Conversações, being a program presented and produced by a black journalist, “ it opens up space for the common citizen and awakens the feeling of belonging in the public”. And it also charged the maintenance of the program on the broadcaster’s schedule.

The content is conceived, produced and presented by journalist Cláudio Henrique, who now, according to information from the station, will be relocated to the direction of other content on Rede Minas.

In response to the collective, Rede Minas took a stand via social networks stating that “both Inconfidência radio and Rede Minas are in the process of reformulating their programming schedules”, and that “the focus, at this time, is to have productions that broaden the interest of the public”. 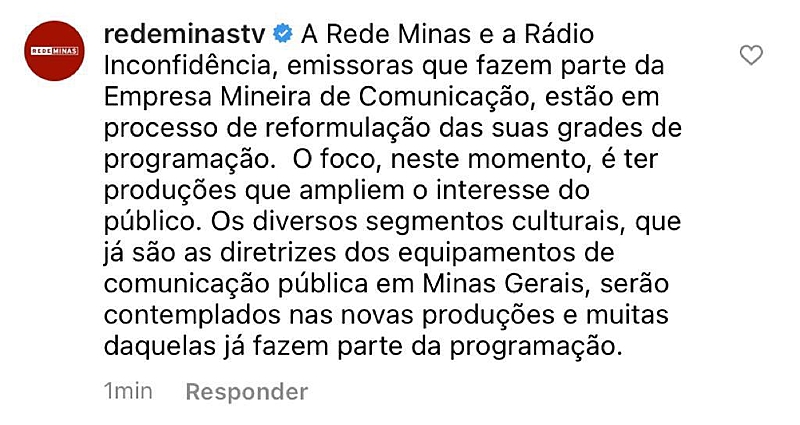 The extinction of the program is not included in the July minutes of the meeting of the Editorial Board of the broadcaster, an entity that is responsible for evaluating whether the contents broadcast are in accordance with Rede Minas’ editorial line. About the case, the broadcaster informed Brasil de Fato that “all the changes will be presented to the members, as soon as they are defined”.

:: Receive news from Minas Gerais on your Whatsapp. Click here ::

Another movement in the programming, which goes against what is expected from a public broadcaster, is the insertion of yet another religious program, “Avoz do Conselho” (The Voice of the Council) in the Rede Minas grid. According to the minutes of the last meeting of the company’s Editorial Board, the program is produced by an association of pastors. The proposal comes from EMC’s new Director of Content and Programming, Luiz Henrique Yagelovic, better known as Ike Yagelovic.

In a commissioned position, EMC’s new director has extensive experience in commercial broadcasters. The insertion is being analyzed by the Council.

Minutes of the Council / Rede Minas

Currently, Rede Minas already exhibits other content of a religious nature, such as the soap opera produced by the Record network “Os ten commandments” and the program by the Baptist Church of Lagoinha “Profeting life”.

Asked about the inclusion of a program of pastors and other religious content in an educational and public broadcaster, Rede Minas stated that “all projects are in the evaluation phase”. And that “for years, the station has had the Ecumenical Band. Currently, this content includes the exhibition of “Prophetising Life”, “Mãe Maria” and the “Sunday Mass”. In relation to the telenovela “Os Dez Comandos”, aired on TV Brasil, Rede Minas broadcasts the attraction, from Tuesday to Sunday, at 12:45 am. The exhibition is part of the exchange of contractual content that Rede Minas has with the public broadcasters TV Brasil and TV Cultura”, says the note.

Earlier this month, the workers of the Inconfidência radio, which together with Rede Minas make up the Empresa Mineira de Comunicação, announced the possibility of going on strike after the government presented a salary adjustment only for workers in commissioned positions.

The proposal was presented in the Positions and Salaries Plan (PCS) of Empresa Mineira de Comunicação (EMC). Inconfidência’s workers also denounce that they have been without salary adjustment for more than three years, which in 2020 was granted only to commissioned employees. Another complaint in the category is that the Career Plan extinguishes job vacancies that would gradually be occupied by outsourced workers.