Reserve agents of the São Paulo State Military Police have used social media to spread the idea that the demonstrations in support of President Jair Bolsonaro (no party), scheduled for September 7, have the support of members of the corporation.

Retired officers deceive the audience on Facebook and Twitter with photos wearing police uniforms and with their ranks in the description of the profiles. They hide, however, that they do not belong to the current cadre of police officers.

On Monday morning (23), the governor of São Paulo, João Doria (PSDB), removed the active colonel Aleksander Lacerda from the São Paulo Military Police. The measure took place as a result of a publication on social networks in which the official summoned São Paulo police officers for the September 7 protests.

O Brazil in fact consulted the contractual status of two officers who identify themselves as the “Major of the Military Police of the State of São Paulo” on Facebook and Twitter: Gerson Rodrigues and Aldrin Santos Corpas.

The first of them, according to Portal da Transparência, is retired. Rodrigues appears in the records as an employee of São Paulo Previdência (SPPrev), a standard for employees who ended their professional activities in the public service.

The second, according to the Official Gazette of the State of São Paulo, was put into reserve in February this year. Since January, Aldrin has published on social media in support of President Jair Bolsonaro and against the justices of the Supreme Court (STF).

This week, a publication made by Aldrin went viral on the social network after accusations that “another policeman” would be defending the pro-Bolsonaro acts. Instead of clarifying that he was no longer part of the PM’s staff, he started cursing his followers on social networks. 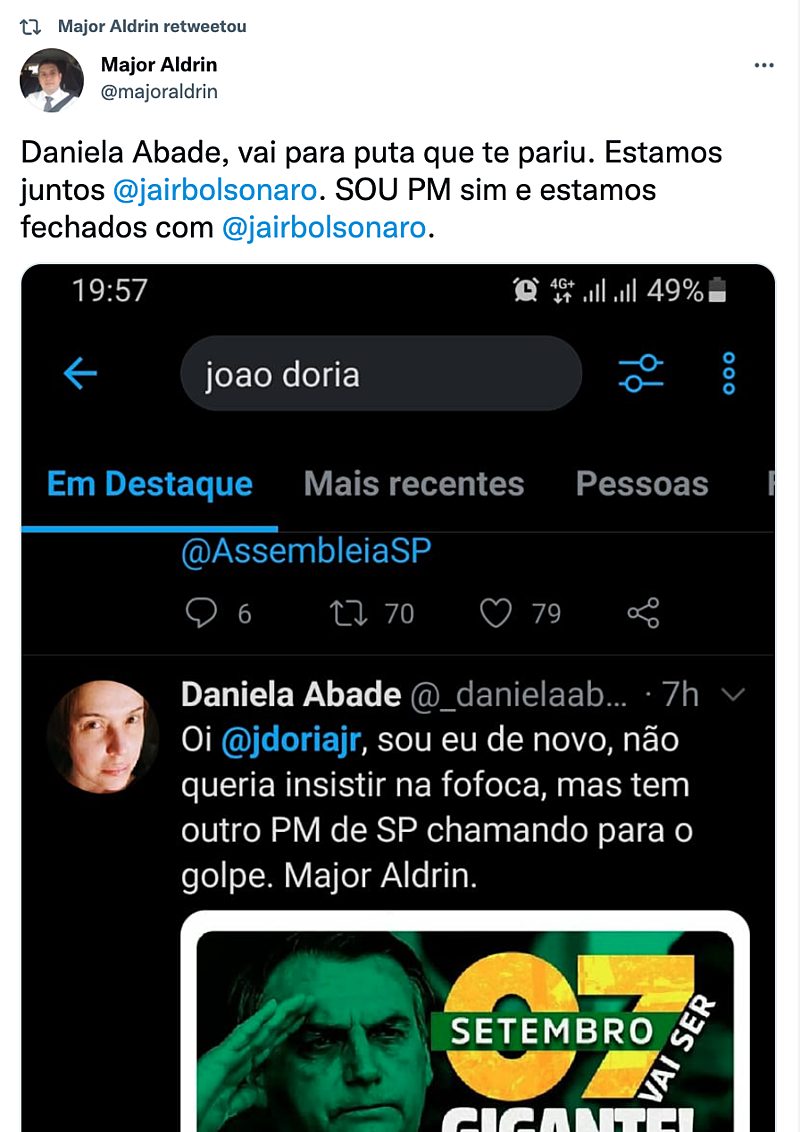 Publication made on Facebook by Major Aldrin Santos Corpas / Reproduction/Facebook

What is known about the riot

This Wednesday (25th), the Brazil in fact showed that a possible mutiny in the military police in support of Bolsonaro in the September 7 demonstrations has been sparked by active and retired police officers, by associations that bring together officers working in state military forces and by deputies from the “bullet bench”.

Last Monday night (23), the National Association of State Military Personnel of Brazil (Amebrasil) released a statement stating that the Military Police will follow the Army in the case of “internal defense or institutional rupture (state of siege or defense)” .

In the communiqué, the association invokes article 144 of the Federal Constitution to affirm that the military police are responsible for “security and public order”. The statement was published by the president of Amebrasil, colonel of the DF Military Police (PMDF) Marcos Antônio Nunes de Oliveira.

:: Public Security Specialist: “We were never so close to a riot in the Military Police” ::

“They are assigned (to the police), in the field of internal defense or in the event of an institutional breakdown (state of siege or defense), to compose the national mobilization effort to defend the homeland, guarantee constitutional powers and guarantee the law and the order,” says the note.

In a report published on Monday, the Poder360 website described the movement of WhatsApp groups of agents from São Paulo and Rio de Janeiro and stated that soldiers and officers from active and retired people talk about “demanding” power, fighting against communism and demand the removal of the justices of the Supreme Federal Court (STF) from their positions.

In one of the groups, police officers agreed to attend the demonstration on Avenida Paulista wearing the corporation’s berets, an idea supported by the other contacts, who identify themselves as captains and sublieutenants of Rondas Ostensivas Tobias de Aguiar (Rota), an elite group of the São Paulo Military Police Paul.

Already according to the newspaper The State of São Paulo, in an article published this Tuesday (24), the summons for the demonstration takes place on social networks by police officers of varying ranks, in different states. The survey pointed out publications made by officials from São Paulo, Rio de Janeiro, Santa Catarina, Espírito Santo, Ceará and Paraíba.

:: Can cameras in uniforms be a solution to police violence? ::

The website UOL also published this Tuesday that military police officers from cities in the interior of São Paulo, such as Itapetininga, Presidente Prudente, Ribeirão Preto, Bauru and Campinas are organizing to attend the demonstration en masse.

According to information from Deputy Colonel Tadeu (PSL-SP), there are already “at least 50 buses rented” by category in these cities. In some of them, he says, PMs are receiving “support” from merchants to pay for their seats, costing between 30 and 100 reais.