Belém, capital of the state of Pará, located in northern Brazil, is a city surrounded by small islands. In one of them, people who make a living from fishing and planting are overwhelmingly feeling the impacts of the pandemic and the consequences of the lack of planning, omissions and errors of the federal government in the face of the health crisis. On the banks of the Guamá River, riverside dwellers suffer daily from the question: will they have food or not?

The situation is repeated in the four corners of Brazil. In the countryside and in the city, affecting even more those who live in rural areas. A survey released by Food for Justice, an institute of Latin American studies, analyzed the effects of the covid-19 pandemic on the diet of the Brazilian population and found that the northern region of Brazil is the second with the most people in a situation of food insecurity: 67%, only behind the Northeast where 73.1% of the population was affected.

Food insecurity occurs when people are concerned or uncertain about food. In other words, she doesn’t know whether or not there will be food on her plate. For this situation, the Brazilian Institute of Geography and Statistics (IBGE) classifies three levels of food insecurity: mild, moderate and severe.

The 80-year-old retired Catarina Custódia and her husband, the 79-year-old farmer Luis Cardoso, are one of those who fit the statistic. “When we know that there is little food, we divide it into small portions so as not to be lacking”, says the lady who is trying to survive on the R$1,100 pension.

In the simple wooden house with only two rooms, a living room/kitchen and a bedroom, the woman lives with her husband who still works, but with difficulty, because he has constant back pain.

Luis Cardoso, 79, was born in São Miguel do Guamá, northeast of Pará. In his homeland, he learned to catch açaí, fish and till the land with his parents, but with his current health limitations, he can’t even catch the fruit to give rise to the typical food of the region.

“I really miss açaí. To drink, I have to make an effort to buy it. When I don’t have money, I go to the supermarket, they sell it to me on the installment plan, when I get the money I go there and pay. I buy about eight kilos of flour to spend the month, because it’s just the two of us, but sometimes we help a neighbor who needs it, then it reduces, but we have to help the next one. So, it’s flour, rice, coffee, four kilos of sugar, three kilos of beans. These are my little purchases, which are around 200 reais. If I continue like this, I won’t even be able to live here anymore.”

What Luis Cardoso calls installment payment is the “on credit” in the markets, which open an account for acquaintances. He only buys açaí when he gets money or when someone picks it for him.

As for other foods, all were affected by inflation. The basic food basket in Pará had an increase of 18.5% in the last 12 months, according to data from the Inter-Union Department of Statistics and Socioeconomic Studies (Dieese), reaching R$ 522.66 and compromising more than 50% of the minimum wage.

In the case of the riverside dwellers of the Guamá River, in addition to food, there is a high cost of transport, if the person does not have their own boat.

Transport is R$10 per person to the capital, Belém. In this case, R$40 if Dona Catarina and Seu Luis Cardoso go together. It is also necessary to buy gas for the kitchen, water to drink, pay for electricity and medicines for her, who is hypertensive and from him that she has back pain.

Dona Catarina Custódia makes a point of saying that the riverside’s life is not easy. There is a lot of work, but also a lot of return from nature. However, the pandemic and the lack of public policies for those who live on the banks of the river have undoubtedly made life harder.

“My life has gotten worse. There are days when there is no food at home. When we see that there is no food, we transfer that little bit to another day. In the past, I used to go shopping with my daughter and that was that ‘bag‘ of food and there was still money left over. Now I pay for water, pay electricity and buy gas, there’s nothing left,” says Catarina.

The North region is the second in the country most affected by food insecurity, only behind the Northeast, where the index exceeds 70%. / Reproduction / Infographic /Food For Justice

The Brazilian Institute of Geography and Statistics (IBGE) classifies food insecurity in three ways: mild, moderate and severe, with mild food insecurity being when there is concern or uncertainty about access to food in the future or when the quality is inadequate .

Severe food insecurity, on the other hand, is when there is a quantitative reduction of food among children and lack of food for all household members. In this situation, hunger becomes an experience lived at home. In this case, 29.3% of the population living in Northern Brazil was affected. 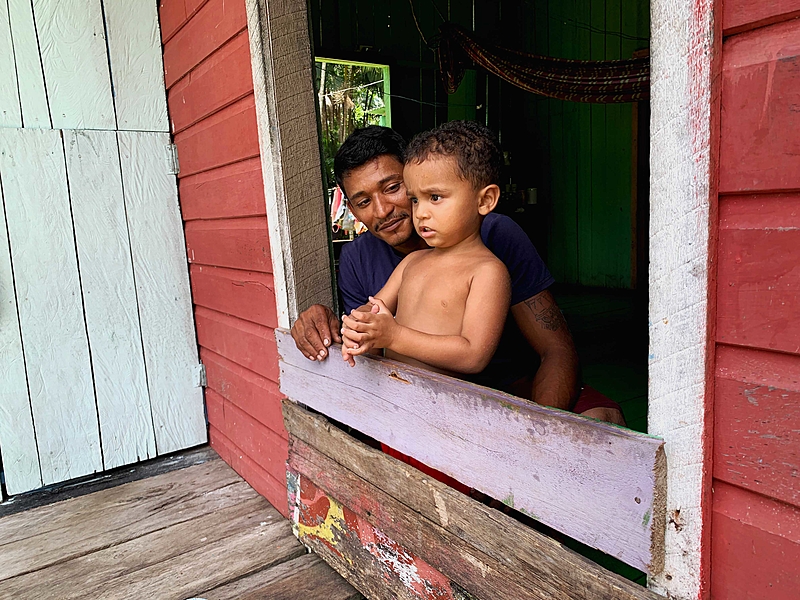 The riverside José Augusto and Miqueje aged two years and six months. He is one of the people who was excluded from emergency relief and starved in the pandemic. / Catarina Barbosa/Brazil de Facto

In theory, emergency aid is a support for people in situations of social vulnerability accentuated by the pandemic, but in practice few people are currently receiving the right, which was reduced to R$375.

According to the Ministry of Citizenship, more than 22 million Brazilians were excluded from emergency aid in 2021. The carpenter José Augusto, 29, who is also a riverside dweller on the banks of the Guamá River, is one of them. With the support of his mother, José takes care of his two-year-old and six-month-old son. The child’s mother died months after giving birth, after she became infected with H1N1 and died of complications from pneumonia aggravated by the disease.

The boy Miqueje is not covered by Bolsa Família and the father received, during the pandemic in 2020, a portion of R$600 of the emergency aid and none more. With the pandemic, he says he had to work a miracle to keep the child from running out of food.

“We fish, put in a net, a matapi (instrument for fishing shrimp), you can live on, but the others that you need to buy with money were missing. I remember that everything was cheap before, so let’s take it. There was a lack of beans. , rice that we are used to eating, flour. Months ago we were buying R$ 130 a package, now it has increased to R$ 180″, says the fisherman about feeling the impacts of inflation on his skin.”

Without help from the government, the riverside dweller says that he lives day after day in the fight so that there is no lack of food, especially for his son, because he has already felt the anguish of going hungry.

It’s very sad when the guy opens the fridge there’s nothing, it’s very strong, you know, and hunger hurts, when there’s time to have lunch and not have it. It’s that fight.”