Author translated into five languages, with dozens of books published, Boaventura de Sousa Santos is a relentless critic of neoliberalism and the rise of the fascist right-wing. Professor at the universities of Coimbra and Wisconsin-Madison, he is an international authority on the sociology of law, human rights, globalization, democracy and popular participation.

In this interview, expanding the themes covered in this month’s print edition of Brasil de Fato RS, he addresses the role of the State as the protector of the majority of the people, the decisive role of public health services in the pandemic, the destruction of state-owned companies promoted by economic elites , the withdrawal of rights and the advent of workers without any rights and who consider themselves “entrepreneurs”.

In addition, he analyzes the Brazilian scenario, according to him “a pathetic, cruel case study of a genocide who remains in power”.

Check the interview in full:

Brasil de Fato RS – In Rio Grande do Sul, the population launched a campaign for a plebiscite demanding to be consulted before the privatization of state public companies. As always, the sale of SOEs is presented by neoliberalism as a solution to all the problems of the municipality, the state or the country. In Brazil or in other countries that adopt the same credo, it seems that the greatest obstacle in the path of progress is the existence of public companies. Is that really it?

Boaventura de Sousa Santos – Brazil is currently behind on two levels. It is undergoing an active process of retrogression and, on the other hand, it seeks to renew the neoliberal privatization policies so discredited around the world, especially after the pandemic.

The obstacle to the path of progress that includes citizens is privatization. They are an obstacle, because they are fundamentally aimed at solving a crisis of capital accumulation. That is, the privatized company is the one that is normally prepared to make a loss so that, after privatization, it returns to profit. And it happens, sometimes, that even companies that are making a profit are privatized.

The State is increasingly needed for those who need rights

BdFRS – In a country with such inequalities as Brazil, is it reasonable to think about further reducing the size of the State? Who will pay this price?

Bonaventure – It is neither reasonable nor fair to further reduce the size of the state. Why? Because the State today is increasingly needed by those who need rights, which is the majority of citizens. To shrink the State is to destroy rights. Because at this moment we cannot find another way to give universal access to the right, to health, to education, to a decent life, to drinking water, other than by public means, and for that we need to fight hard.

BdFRS – In Brazil and in many countries, there is a malaise, dissatisfaction with the performance of the State and its institutions. But what are the market conditions to satisfy such demand?

Bonaventure – There is no natural condition that tells us that the State is always inefficient or always corrupt. No. It can be efficient and many states are. It may not be corrupt and many states are not. We need to fight for it to work better, but it is clear that the State is the only way to guarantee minimum living conditions for those citizens who cannot have access to basic services.

The corporate and hegemonic media are at the service, because they are owned by economic groups and, therefore, they want privatization and they want the ideology of the State’s inefficiency and corruption to be propagated.

“Countries with public health services such as Brazil, Portugal too, had the protection that it was possible to give to citizens. It was clear that the State is fundamental” / Photo: Fabiana Reinholz

When the pandemic came, no one looked to the market to protect themselves

BdFRS – Brazil is heading towards 600 thousand deaths by covid-19. It’s a frightening number, but if it weren’t for the Unified Health System (SUS), public, universal and free, the figure would be more terrible. Throughout the world, during the pandemic, the state played a decisive role. Do people relate the State’s presence to the preservation of their health and life?

Bonaventure – When the pandemic came, no one looked to the markets to protect themselves. They sought out the State. And the state, in many countries, was not there, precisely because healthcare in many countries has been privatized in the last 40 years. It turns out that privatization was not total. Therefore, countries with public health services such as Brazil, Portugal too, had the protection that it was possible to give to citizens. It was clear that the State is fundamental.

Here in Portugal, the unified health service is being refinanced. It is a moderate leftist government, but it seems to be learning this lesson that there will be more pandemics and it is necessary to strengthen public health services to be better prepared for the next one.

We are not going to get rid of this pandemic. It will enter an endemic phase. We will have to get vaccinated annually, there will be new variants and the need for other vaccines. The state of protection with the national health service will be fundamental in the near future.

A dictatorship guarantees economic freedom. Only democracy guarantees the others

BdFRS – Although neoliberalism carries the banner of democracy, there are those who say that, in the view of neoliberals, there is too much democracy. What do you think?

Bonaventure – Neoliberalism only knows one freedom. It’s economic freedom. He doesn’t know any other: political, civic, cultural freedom, none of that matters. In fact, all can be cut, restricted, limited. A dictatorship can guarantee economic freedom. Only democracy guarantees the others.

BdFRS – A ruler, in theory, should seek the common good. But despite the meager results and the frustrations arising from the sale of public assets, governments around the world continue to pray for the booklet of privatizations. What is the logic behind this?

Bonaventure – I recently published a book by the publisher Boitempo, entitled “The future starts now: from pandemic to utopia”. I show that the behavior of States was different. Those that responded best (were) States with left or center-left governments. And those that behaved worst – England, USA, Brazil, India, Colombia – were the countries ruled by the right. These are absolutely ideological and seek to justify their policies using all means.

The pandemic showed one thing: right-wing governments are good at destroying, but not good at building. When a policy for citizens is needed in a crisis, they do nothing because they don’t want to do it and because they don’t know how to do it. There is a constitutive incompetence. They were trained to leave everything in the hands of the markets and take care only of the police, the repressive state, not the protective state. 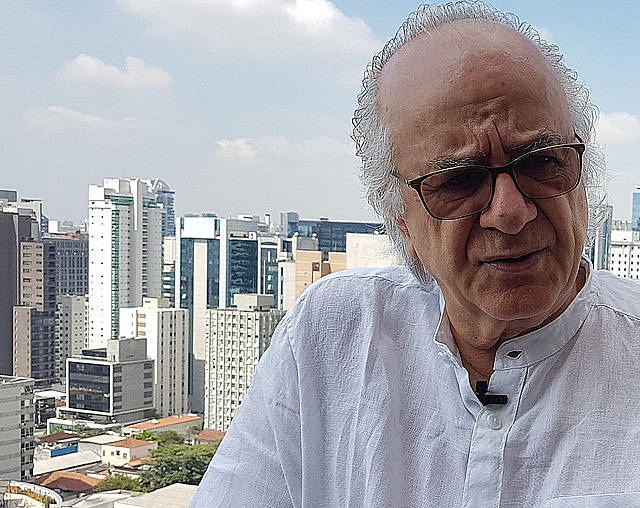 Boaventura: “The Brazilian government is today a case study, a laboratory of what we call denial” / Photo: Lu Sudré

BdFRS – The Jair Bolsonaro government manages to unite exacerbated neoliberalism and ultra-rightism. What is the vision that, after three years of the current government, the current Brazil leaves in the eyes of a foreigner?

Bonaventure – The Brazilian government is today a case study, a laboratory of what we call denial. It is the policy of denying the gravity of the pandemic and wanting, at all costs, to protect the economy before protecting life. These governments have shown that they are neither good at protecting life nor good at protecting the economy. Look at the crisis in Brazil, in Colombia, the crisis in the United States which is only disguised because they can print money every day without devaluing the currency.

Brazil is today a pathetic, cruel case study of a genocide who remains in power and whose social acceptance is still too high for an absolutely disastrous performance. This inability, which is not an incapacity, is an incapacitation, Brazilian citizens were unable to see the enormity of the disaster, a situation that is almost one of social Darwinism, that is, the intentional destruction of the lives of the poor and blacks as is said in Brazil.

Uberized workers must have a place in unions

BdFRS – Is the defense of democracy and, with it, the defense of workers’ rights one of the great themes at this moment in the history of popular struggles?

Bonaventure – The defense of democracy continues to be the great flag of popular struggle. Young people, women, indigenous peoples, peasants, quilombolas, Afro-descendants, from all over Latin America, the Americas, all of them today appropriated the idea of ​​democracy. They want real democracy. And obviously as long as there is capitalism, it is necessary to defend workers’ rights.

Of course, the rights of all workers must be defended, not just those with a formal contract. Many workers today are uberized. They want to convince them that they are entrepreneurs. No, they are workers. And they have to take place in the unions. Your struggles have to be recognized.

In some countries, it’s already been recognized that app deliverers are workers. It is a fight that has to be continued and renewed. Capitalism, at this moment, does not have and does not want to have any other option but to make the labor force more and more precarious. The financial capitalism we have today binds workers to consumer debt. Household debt has never been higher and, to pay off debts, it is a new form of slavery, working 70 hours (per week) without rest.