On his 45th birthday, Mário Roni had no expectation of anything resembling a party. “There won’t be anything”, he summed up. On that bleak, cold day in late June, lunch would be beans and rice “and some doves that a hunter gave me”. It’s the meat that sometimes gets it.

It wasn’t bad considering that everyone in the house – besides him, his wife Ana Paula, 40, and his daughters Renata, 20, and Ana Cláudia, 15 – would sit at the table and eat.

It’s not always like that. And when it’s not like that, what happens? “I limit myself”, he summarized. In fact, he is not alone in this limitation. “My wife and I only ate after the children”, as she calls her daughters, one adult and the other teenager.

“If it’s left over, we’ll eat it. If not, we’re going to the bush to look for bergamots”, he says. If bergamots do not appear or are few, appeals to black coffee thickened with corn flour. “We roast the flour in a frying pan to become a little mush.”

Mário Roni Siqueira Marques lives in Cerrito Alegre, 3rd district of Pelotas, with 345,000 inhabitants, the largest city in the so-called Southern Half of Rio Grande do Sul, the poorest region in the state and which concentrates the largest rural properties in the state’s territory. Ironically, Rio Grande was once called, in the distant past, the “Celeiro do Brasil”.

The dark nights of the Marques

Profession? Mario Roni has none or all. “I work in any type of service.” More than five years have passed since the last one he got with a formal contract. It was in a jam factory. I worked on a mat separating peaches. At the time, Ana Cláudia also got a job there. Both earned the minimum wage. “It was the best time,” he recalls.

Food insecurity and hunger are realities that have returned to Brazil in recent years / Art: Brasil de Fato

Today, Marques’ nights are always dark. “We don’t have any more light. They cut for lack of payment.” In a pinch, the head of the family sold the bicycle he was riding to look for work. Not bad that a neighbor who does some odd jobs bought a used one and lets him use it at will.

“You have to grab it with a nail and a tooth”

Today, Mário Roni is a day laborer. I mean, it works when something comes up. “It’s not easy.” It does a little of everything. In better months, it gets up to R$800, well below the regional minimum wage. “Sometimes not even that. Often, you can only get work for eight or ten days a month. And you have to grab it with a nail and a tooth”.

Mário Roni and his family live in a rural area belonging to a quilombo, but they do not have land to plant. In the scarce space he has, he sows potatoes and yams. She raises a sow that had eight piglets, all of them young, still suckling. It is not a meat that will frequent the Marques’ table.

“As soon as they are weaned, I will have to sell them when they are still small to be able to buy food for the sow.” 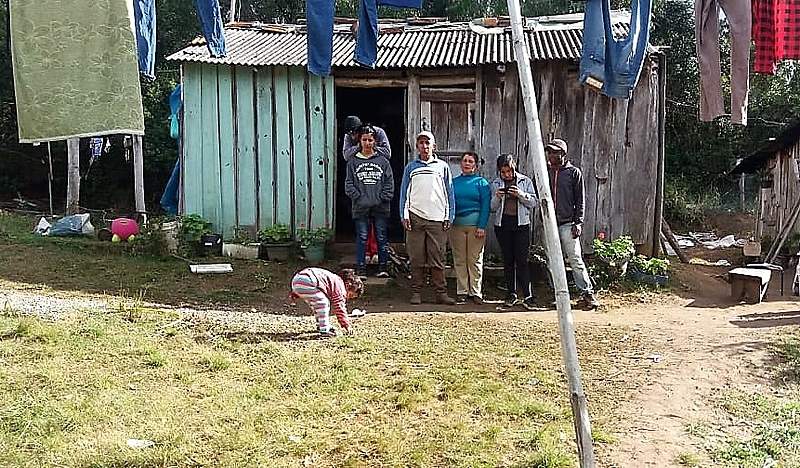 Without a formal contract for over five years, Mário Roni works in any type of service / Photo: Maria Venância Farias

A first look at agricultural production in Rio Grande do Sul shows advances in soy and corn crops, but it does not allow us to see crucial information.

“The supply of food without corn and soy in the 1970s was 4.6 kg per person/day, but after 45 years, it is 3.28 kg per person/day,” notes researcher Gabriela Coelho de Souza, from Federal University of Rio Grande do Sul (UFRGS), one of the authors of the Fome RS study, in progress.

There was a reduction of almost 30% in the diversified offer of food in the South, precisely one of the most privileged regions in the country in terms of access to nutrition. The picture is more perverse in the so-called Southern Half, which helps to explain part of the problems of Mário Roni and his family.

“Food insecurity and poverty in rural areas go unnoticed, since Brazil, and especially Rio Grande do Sul, export tons of grain”, note the researcher and her colleagues Alvori Cristo and Mirian Strate, all members of the Socio-environmental Observatory in Food and Nutritional Security (ObSSAN – AsSsAN Círculo), of the University of Rio Grande do Sul.

The request of Brazil in fact, the three analyzed the state framework, noting, for example, that the decrease in food diversity simplifies the diet and causes a loss of food and nutritional security. Comparing 1970 with 2020, there was a drop in the state’s production of beans, potatoes, cassava, wheat, rye, chicken, cattle, vegetables and fruits.

Without a formal contract

In the better months, Mário Roni gets a maximum of R$ 800 / Art: Brasil de Fato

They indicate “marked differences” between the southern and northern halves, starting with the process of land occupation. In the first, land concentration marked by the cultivation of rice and livestock. In the second, the predominance of small and medium-sized properties and family farming. In the rural South, salaried employment, temporary work and without a formal contract are common.

Considering the entire state, the groups most severely threatened are those surveyed by the 2010 Census: those without income, represented by 25.27% of the population over 10 years old and the population with income between 25% of the minimum wage and one minimum, which covered 23.42%. Without counting the 2020 Census data, researchers believe the outlook is probably worse.