In less than two weeks, on September 12th, the thermometer on the participation of this new expressive electorate will be revealed in the Primary, Open, Simultaneous and Compulsory (PASO) election.

The new scenario is reflected in the strengthening of the political rights of the migrant population, which now represents 16% of the electorate in the city of Buenos Aires. As a result, it is also reflected in renewed efforts by the main political forces to capture these votes.

:: US and NATO “hasty withdrawal” from Afghanistan could foment terrorism, says China ::

On the one hand, there is the government coalition, the Frente de Todos (FdT), which, as the tradition of previous elections points out, represents a current of preference of the migrant vote; and, on the other, Juntos por el Cambio (JxC) – or “Together for Change”, in free translation.

This, a right-wing coalition, carries as history the anti-migration policies of former president Mauricio Macri, whose (Republican) party has ruled the Buenos Aires ballot box for 14 years.

The province of Buenos Aires also has an automatic registry, in effect since 2009. However, an improvement in the automation system significantly increased the migrant electorate, by 25%. This year, there are around 800,000 foreign inhabitants of the province who will be able to go to the polls on the next 12th.

Although in greater numbers compared to the federal capital, migrants represent 6.7% of the electorate in the province of Buenos Aires.

Evolution of the migrant electorate in the province of Buenos Aires. / Ana Paula Penchazadeh / Data: Superior Court of Justice CABA

Currently, around 2 million foreigners live in Argentina, according to the Statistical Yearbook for Migration of Argentina 2020, by the Conicet Human Rights Network.

The most predominant nationalities are Bolivia, Peru and Paraguay. Like most of the national inhabitants, the migrant population is also concentrated especially in the city and province of Buenos Aires.

The researcher on migrant issues, Ana Paula Penchaszadeh, who coordinated the Yearbook team, has given workshops to train this new electorate to participate in the country’s elections, which adopt paper voting and the system of candidate lists by parties.

“The province and city of Buenos Aires together concentrate 70% of the country’s migrant population”, points out the researcher.

“It is an electoral force that definitely changes the map and, in addition, the vote always has a strategic dimension. This means that the more this vote has weight, the more possibility it has to influence politics and generate transformations. No candidate goes against a candidate. minority that can tip the balance,” he concludes. 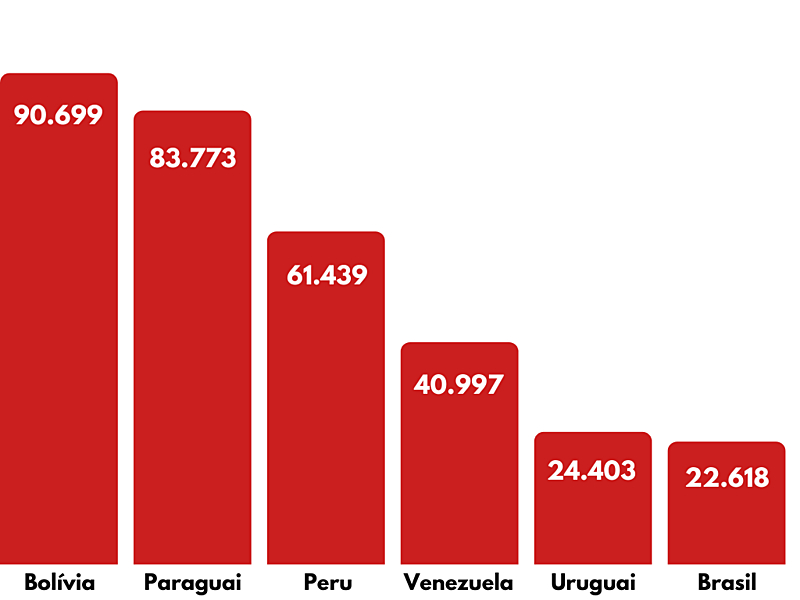 Migrants registered in the electoral register according to nationality in the city of Buenos Aires in 2021. / Ana Paula Penchazadeh / Data: Superior Court of Justice CABA

Chilean sociologist Pablo Cossio has been living in Argentina for 10 years and will vote for the first time in the city of Buenos Aires.

“Even when politics and the electoral process are topics of interest, bureaucracy makes it difficult for migrants to register to participate in elections,” points out Cossio.

“Now, even with automatic registration, many are still unaware of this right. With the organization, we travel through popular neighborhoods to inform people. Of every twenty people I stop to talk, only two know that they can now vote,” he says.

In addition, the sociologist highlights that the lack of construction of an identity as a political subject, an active participant in the country’s institutional and political processes, distances many migrants from the electoral process.

Targets of xenophobia and structural racism, something that crosses all political currents, migrants still cannot be elected, which aggravates the problem of representation.

“The political forces are going to speak in favor of migrants, but, in concrete, they are far from knowing and actually being able to improve the living conditions of migrants in Argentina”, points out Cossio.

The current closest to the migrant community, like the most vulnerable communities in general, are left-wing parties, such as the Frente de Izquierda (FIT), for carrying out grassroots work. In the last legislative elections, in 2017, they had 10% of migrant votes in the federal capital.

“It is interesting to note that the migrant electorate does not vote like the nationals,” Pechaszadeh points out. “In a district where PRO always wins, in 2017, Buenos Aires Kirchnerist Peronism had 48% of migrant votes, PRO 28% and FIT 10%.”

As the most powerful progressive political force, Peronism ends up being the strategic vote of migrants as well. In the campaign for these elections, the FdT has carried out informative work, as pointed out by Paula Arraigada, first candidate for trans deputy for the federal capital.

“It is a coherence of sustaining our militancy, which comes from popular feminism. Our political space is interested in migrants not only for the electoral result, but because we focus on serving vulnerable populations. To a large extent, the needs of migrant people are also the needs of of the trans community”, he says, pointing out issues of housing, documentation and active participation in society.

:: Community effort multiplies to end the hunger of families in Philadelphia, USA ::

“We want the migrant population to be in decision-making spaces. We defend public policies for migrants, as well as for trans, afro, slum dwellers, rural people, people with non-hegemonic bodies”, continues Arraigada, highlighting the coalition’s intention to fight for the possibility that migrants can also be elected in the future.

Faced with the challenge of capturing migrant votes, Juntos por el Cambio has invested in campaigns on social networks, the media and, in poorer areas, it has invested in face-to-face travel. The coordinator of the migrant campaign is deputy Claudio Romero, president of the Republican Party (PRO) in the federal capital.

“What we have done is to tell migrant people everything we have done over all these years. That from the first day they arrive in the city, they can enjoy services like any national citizen, public education and an excellent health system”, lists. “We count that all these services, water, electricity, do not appear by magic, but are available because there is a government present.”

When asked about the party’s challenge in the face of the migrant population’s resounding rejection of Macri’s decree that facilitated migrant exports, the deputy stated that the measure was necessary.

“Drug trafficking is a problem that has entered popular neighborhoods. Good people shouldn’t be worried, because here they have the freedom to study, work and have full health as an individual,” he says.

As a project aimed at the migrant population, Romero highlights the labor issue. They intend to facilitate the registration of legal entities for self-employment and promote the regularization of work.

The general election, which will define the next legislative posts in question, will take place on November 14th.