The University Council (Consun) of the Federal University of Rio Grande do Sul (UFRGS) approved this Friday (30) an opinion calling for the removal of the current rector, Carlos André Bulhões.

The rector was appointed to the position even though he was not the winner of the consultation carried out in the university community.

In practice, the approval of the motion does not remove him from office, as the removal does not depend only on the Consun. The appointment of rectors is a function of the president.

:: Federal universities do not have the resources to cover basic expenses in RS ::

Among the justifications presented is the non-compliance by the Rector with resolutions previously approved by the Board. According to the regulations of the University, the Rectory is part of the Consun composition.

In addition, it also asks for the installation of an administrative proceeding against the current dean, with the establishment of a Disciplinary Administrative Proceeding (PAD), with the objective of ascertaining the possible “server liability for infringement committed in the exercise of its duties, or that has relation with the attributions of the position in which he is invested”.

The Council session also decided to represent the Federal Public Ministry (MPF), as there are signs of violation of the principles of legality and publicity in the public service.

The group also defines a session to consider the proposal of “removing the dean and vice-rector, as provided for by law, with the approval of at least 2/3 (two thirds) of the councilors, in a session specially convened for this purpose”, which will be held on July 13th.

The decisions approved at this UFRGS University Council meeting are included in Opinion 80/2021, which can be accessed here.

The University Council (Consun) of the Federal University of Rio Grande do Sul (UFRGS) approved, this Friday (30), a note in support of the impeachment of President Jair Bolsonaro.

Consun is made up of members of the university and outside it and the assessment of the grade was proposed by the representation of administrative technicians of the university. This is the first university council of a federal university in the country to issue a document in this regard.

:: Bolsonaro nominates for the 22nd time rector who was not ranked first in the public consultation ::

The note was approved in an online vote, as have been the meetings during the pandemic period, and highlights the reasons that led the Council to understand why the president should not remain in office.

The text highlights the lives lost due to failures in the fight against the pandemic, especially in the purchase of vaccines, also recalling the information disclosed by the CPI of Covid.

The proponent of the note was Tamyres Filgueira, representative of the administrative technicians of UFRGS on the Council and coordinator of the union of the category (Union of Technical-Administrative Servants of UFRGS – Assufrgs Sindicato).

According to her, the note in support of Bolsonaro’s impeachment is very important due to the role that UFRGS plays in society.

“It is essential that, in view of the chaos that is this government, institutions, as well as society as a whole, take a stand in defense of life and against this genocidal, corrupt and denialist government”, points out the union leader.

Tamyres also recalls as reasons for this note the constant attacks on democracy and the transparency of elections, without having evidence for these accusations. Also, the government’s denial policy as responsible for tens of thousands of Brazilian deaths.

The approval by the University Council had little resistance, with only 4 votes against and 10 abstentions.

According to Tamyres, the 52 favorable votes reflect the understanding of the university community, as well as society in general, that given the government’s role in the pandemic, it is no longer possible for Bolsonaro to remain in the presidency.

Approval of the support note for the president’s impeachment had little resistance, with only 4 votes against / Reproduction

In the afternoon, members of the university community extended lanes on the viaduct on Avenida Salgado Filho, in downtown Porto Alegre, contrary to the federal government and against federal intervention in the UFRGS rectory.

After extending the sash, those responsible for the act were approached by the Military Brigade and had to remove the sashes. 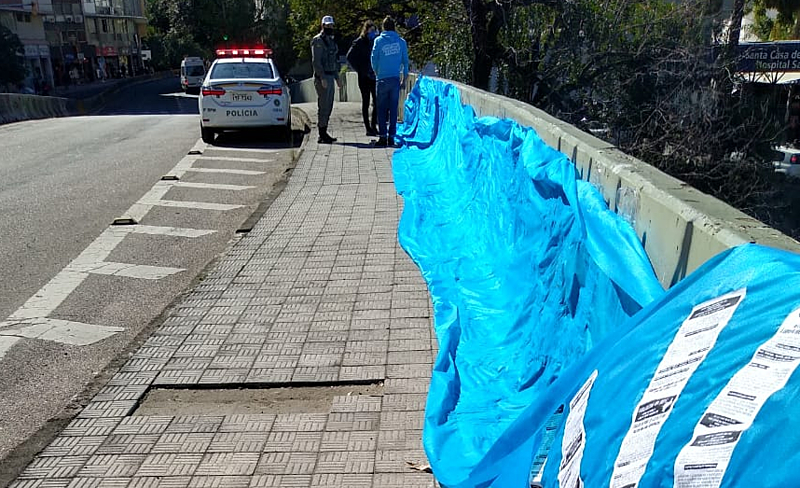 Check the note in full:

The Federal University of Rio Grande do Sul, through its University Council (CONSUN), meeting virtually on this date, comes to express support for the impeachment request of President Jair Bolsonaro.

We are living in a very serious moment in our country. We have more than half a million lives lost, victims of the COVID 19 pandemic, but also victims of the federal government’s denial, which has had a policy of acting contrary to the measures pointed out by science to combat the pandemic.

We have already lost many university colleagues, family and friends. The vast majority of these lives could have been saved if the acquisition of vaccines had taken place in an accelerated and timely manner, facilitating the population’s vaccination, as the emergency of the moment demanded. Preliminary evidence from the CPI of the pandemic, in the Federal Senate, has shown that, instead, the Federal Government was negotiating the purchase of vaccines aiming at bribes.

Therefore, CONSUN expresses itself in support of the impeachment request, as it considers that the university and its council must fulfill their historic role, taking a decisive stance in the face of the seriousness of the facts.