After being ousted from power by the US invasion in 2001, the Taliban have returned to power in Afghanistan now in mid-August. The return comes after a series of relevant events: an agreement in 2020 with the US, the flight of the country’s then president, Ashraf Ghani, to the UAE and the Taliban’s offensive to take the capital, Kabul.

The speed of the extremist group’s advance surprised the US / Infographic: Pedro Vó

Before the most recent event in the conflict, the Afghan War left some 171,000 dead. Among the fatal victims are more than 47,000 civilians. The financial cost was also high, the United States spent $2.26 trillion on its operations in Afghanistan and also in neighboring Pakistan. This figure does not include the spending that the US is obligated to incur for life on veterans of the conflict. The data are from Brown University, from the “Costs of War” project. 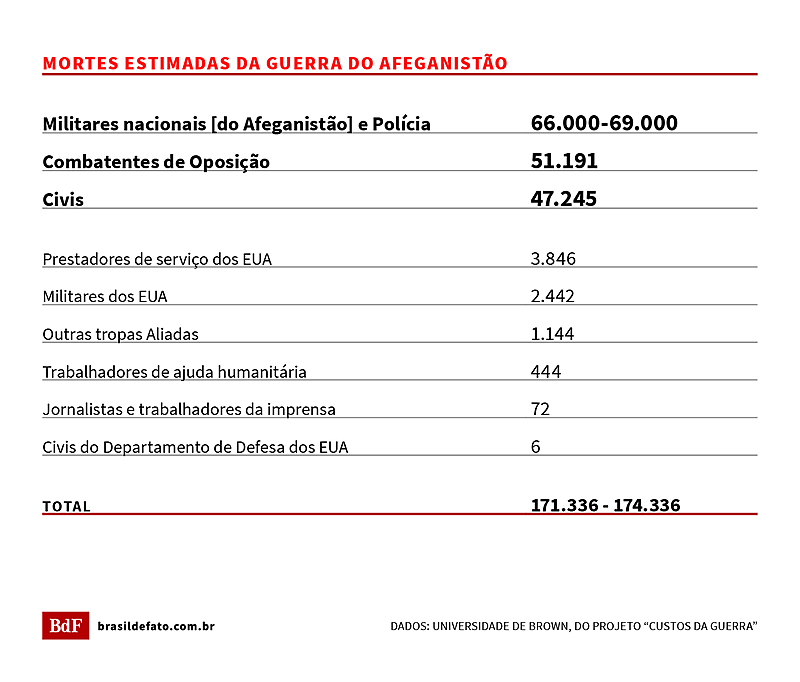 In addition to the US invasion, troops from the North Atlantic Treaty Organization (NATO) were in the country from 2003 to 2014. Countries such as Germany, United Kingdom, France, Italy, Poland, Portugal and Spain contributed military personnel to the war, either through NATO or by independent efforts.

Read too: Afghanistan could have “long-term implications” for Biden, says US Socialist Party

Taliban means “student” in Afghan. The group emerged among mujahidin, Islamic fighters, who faced the Soviet Union’s invasion of Afghanistan from 1979 to 1989. During this period, the mujahidin, a kind of embryonic Taliban, received financial and logistical support from the United States. See the detailed timeline below:

After winning the civil war that expelled the Soviets, the Taliban ruled Afghanistan from 1996 to 2001. During this period, a radical interpretation of Islam was applied. Women were forced to wear a burqa, prevented from studying and working, and could only be out in the street accompanied by a male member of their family.

According to the NGO Human Rights Watch, the “Ministry of Enforcement of Virtue and Suppression of Vice” was one of the most powerful arms of government in this period and was responsible for enforcing Taliban rules of behavior. Playing music and watching television were prohibited activities.

In 2021, the group publicly claims that women will be able to work and study under Sharia law, a kind of Islamic law.

“The issue of women is very important. The Islamic Emirate is committed to women’s rights under Sharia rules. Our sisters, our men have the same rights. They can benefit from their rights. They can have activities in different sectors. and different areas based on our rules and regulations: education, health and other areas. They will work with us, shoulder to shoulder with us. The international community, if it has concerns, we would like to assure you that there will be no discrimination against women, but it is of course within the structures we have. Our women are Muslims. They will also be happy to live within our Sharia rules,” Taliban spokesman Zabihullah Mujahid said at a press conference following the takeover of Kabul.

:: “Afghan women do not need a savior, they need material changes”, says researcher ::

Afghan women who have worked for the past 20 years have protested in the country and are asking the Taliban to include them in the government, according to the Afghan news website Tolo News. Brasil de Fato also spoke with Indian researcher Nivi Manchanda, a specialist in Afghanistan. See below:

Back in power, the Taliban now governs an Afghanistan of 38 million people and a GDP of $19.2 billion, according to World Bank data. In 2001, the country had 21.6 million inhabitants and a GDP of US$4 billion.

:: European leaders discuss how to deal with the new Taliban regime in Afghanistan ::

The country’s future passes through the board of international politics. After US President Joe Biden himself admitted that the pace of the extremist group’s advance occurred faster than anticipated, China declared that it respects the wishes and choices of the Afghan people and expects a peaceful transition from the Taliban.

The issue was also addressed by the UN Security Council, where the UN Secretary General, Antonio Guterres, called for “unity” from the international community and said there were “frightening reports of severe restrictions on human rights”.

Russia, for its part, declared through its chancellery spokeswoman that the Taliban in power “is a reality” and that the group “is demonstrating a tendency towards dialogue and are open to considering the interests of the Afghan people, including women’s rights.”