Army reserve colonel Antônio Elcio Franco Filho, former executive secretary of the Ministry of Health under General Eduardo Pazuello, has been for 40 days without registering appointments in his official schedule. In April, he was appointed special advisor to the Casa Civil and works at the Palácio do Planalto.

The last date registered in Elcio Franco’s calendar was on July 27th. At the time, he filled the eight office hours with two shifts of “internal dispatches”. The pattern is repeated on all other previous dates, except for two of them, when he held internal meetings at the headquarters of the Presidency of the Republic.

Since being appointed to the Civil House, the colonel has accumulated the remuneration of the commissioned position (identified by the DAS code 101.6), of R$ 16,944.90, with the salary of R$ 25,650.40 paid by the Army. The sum exceeds the R$41 thousand monthly gross maturities (the net amount is greater than R$30 thousand). 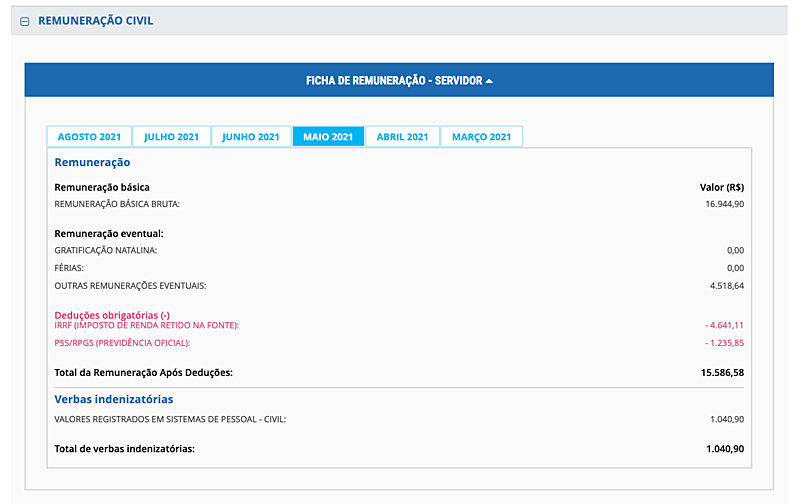 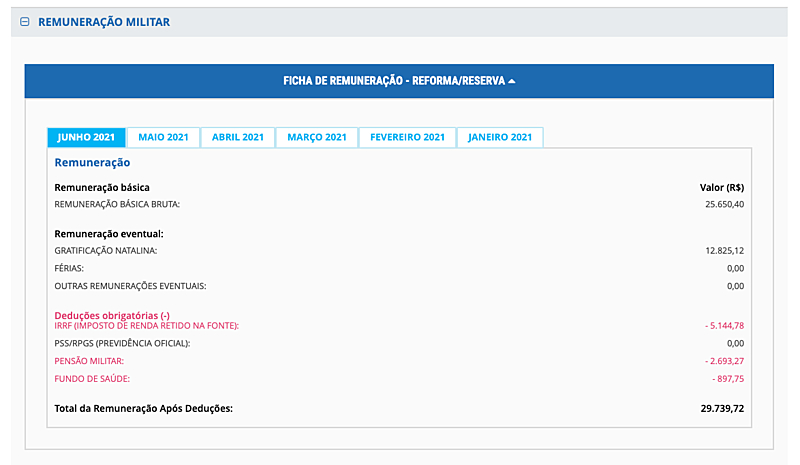 The report sought out the Palácio do Planalto to comment on the absence of official commitments on Elcio Franco’s agenda. Until the publication of this article, there was no return. The space remains open for demonstrations.

O Brazil in fact showed, in an article published on August 24, that General Eduardo Pazuello has held only two meetings since he assumed, on June 1, the position of Secretary for Strategic Studies, a body linked to the Secretariat for Strategic Affairs of the Presidency of the Republic.

Until then, the only two appointments on Pazuello’s official agenda in the 84 days he was in office were inside the Palácio do Planalto, in meetings of the General Secretariat of the Presidency. The first meeting lasted two hours. The second, just an hour and a half. According to official records, he did not hold any meetings outside the Planalto’s facilities.

The rest of Pazuello’s agenda is entirely filled with “internal dispatches”. The report calculated the proportion of internal orders in relation to the hours worked by the general and concluded that 99.2% of the hours worked were filled with this type of activity. Only 0.8% correspond to meetings outside the secretariat.

WHO IS ELCIO FRANCO

Elcio Franco was responsible for negotiations with manufacturers for the purchase of vaccines against covid-19. The military man had an administration at the Ministry of Health marked by truculence and lack of dialogue. In addition to the unsuccessful negotiation with the pharmaceutical company Pfizer, accumulated symbolic episodes, such as the abuse of a waiter in his office and the use of a brooch with a “knife in the skull” in his suit.

An Army officer for 39 years, he retired in March 2019. In the Armed Forces, he became a master in military operations and military sciences and worked in security and defense operations at the Rio 2016 Olympic and Paralympic Games. Deputy Commander and Chief of Staff of the Pacification Force in the Favelas da Maré Complex, in 2014, in Rio. From 2017 to February 2019, he was an advisor to the Ministry of Defense.

On his LinkedIn page (social network of professional contacts), he describes his trajectory as follows: “I exercised functions inherent to an Army Officer and Public Manager, with academic training reconciled with the military and the experiences of the barracks: leadership-teaching-management financial-property-security-human resources-projects-contracts-legal aspects-prospective scenarios-strategic planning etc.”.

In April 2019 – his first month as a reservist – he was appointed advisor and deputy head of Articulation and Monitoring of the Civil House of the government of the State of Roraima, a position he held for less than two months. Afterwards, he was put in the position of Secretary of Health for the state administration, where he remained for three months.

The experiment took place under the command of Governor Antônio Denarium (PSC). Elected in 2018 with the support of then-presidential candidate Jair Bolsonaro (then in the PSL, currently without a party), the politician took office on December 10 of the same year, after being named federal interventor by then-president Michel Temer (MDB ), after the removal of the then governor, Suely Campos (PP).

During the federal intervention in Roraima, one of Denarium’s trusted men in the Armed Forces for public management was Franco’s future boss, active General Eduardo Pazuello. The then future Minister of Health held the position of Finance Secretary of the government of Roraima from December 2018 to February 2019.

The passages of Franco and Pazuello in the Denarium government in Roraima were therefore separated by an interval of two months. Even so, as the general continued to act as a consultant for the city of Boa Vista (RR) in the months following his departure from the state secretariat, the two became closer. They were part of what, later, already at the Ministry of Health, was called the “Roraima gang”. While working in the ministry, the Brazilian federal government distributed 100,000 units of chloroquine to indigenous people in Roraima.

The group of former members of the state government in Roraima is also made up, among others, by the marketer Marcos Eraldo Arnoud Marques, known as Markinhos Show, and by the former federal deputy and named Health Secretary of Roraima after working for the federal government, Airton Cascavel (PPS).

During Pazuello’s administration at Saúde, Colonel Franco was “at home”, not only because of the presence of his former colleagues with whom he worked in public power in northern Brazil, but also because of the presence of officers from the Armed Forces. A day after his appointment, on June 5, 2020, the newspaper “Correio Braziliense” showed that there were already 25 soldiers appointed to the Ministry of Health since the departure of former minister Luiz Henrique Mandetta, months earlier.

Discomposure with waiter and knife in the skull in the lapel

During a videoconference meeting in which Elcio Franco was speaking as a representative of the Ministry of Health, in July last year, an episode occurred that became emblematic of the colonel’s management in the executive secretariat. In a scene recorded and aired on TV and on the internet, the colonel gets annoyed with a waiter who enters the room in the middle of the speech.

He interrupts his speech, gestures, receives help from another advisor to try to get the employee to leave the environment as soon as possible, until he gets impatient and shouts: “Get out of there! I said ‘get out’! What didn’t you understand?” . Finally, he tries to continue his speech.

When he addressed the press at press conferences at ministry headquarters, he made a point of sporting a brooch in the shape of a knife through a skull in the lapel of his jacket, or another of a fist holding a red-bladed knife.

The symbols have a military character. The Brazilian Army’s website says that the knife in the skull means that the troops’ job is to defeat death and conquer it. The image was popularized by the character Captain Nascimento, played by actor Wagner Moura in the film “Tropa de Elite”, which bears the brand of BOPE, a police battalion in Rio de Janeiro, composed of the same two elements. In the work, the police still use the expression “knife in the skull” as an ode to the strength and rigidity of the battalion in fighting crime.

Conducting the acquisition of vaccines

On May 19, the Brazil in fact showed that the general manager of Pfizer in Latin America, Carlos Murillo, was not received by the former Minister of Health, Eduardo Pazuello, on his only visit to the Ministry’s headquarters in Brasília in 2020, on December 22 of last year. On the occasion, the representative of the North American pharmaceutical met Elcio Franco.

::Pazuello did not receive a Pfizer manager on his only visit to the Ministry of Health::

Carlos Murillo commanded the pharmaceutical company’s Brazilian headquarters until November 2020. The meeting at the Ministry of Health was on the official agenda of Pazuello’s No. 2, scheduled for 2 pm – and was confirmed in the executive’s testimony at Covid’s CPI. The information was taken down on the website of the folder.

Confirmation of the date and time of the visit, however, was obtained through the LAI (Access to Information Law). According to the list of visitors to the Ministry’s headquarters last year, the Pfizer executive entered the building only once in 2020, at 1:58 pm, precisely on December 22nd.

Murillo claimed that Elcio Franco introduced him to Pazuello. The minister, in turn, just greeted him, and did not participate in the meeting. The executive also stated that, during the negotiations, he dealt “only with the ministry’s technical team”.

“On this occasion [22 de dezembro], Mr. Elcio Franco introduced me to Minister Pazuello. We greeted each other, and he said that, now that we were advancing, what we needed was more doses for Brazil. I replied that we had this commitment to continue looking for more doses for Brazil,” said Murillo.

Wanted by Brazil in fact to talk about the topic, Pfizer did not respond if the team’s expectation was that the meeting would be held with the minister’s presence. The company says it will not comment on the progress of negotiations for the supply of vaccines against covid-19 to the Brazilian government.

Pazuello’s strategy of not participating in the only meeting with the main US pharmaceutical executive in Brazil within the ministry did not generate the result of bringing vaccines to the country. A month after the meeting with Elcio Franco, the negotiation fell apart.

On January 23, the government released an official statement confronting Pfizer about receiving a letter sent by Carlos Murillo – and delivered to Covid’s CPI by former Communications Secretary Fabio Wajngarten.

In the statement, the folder stated that “the initial doses offered to Brazil would be another achievement in marketing, branding and growth for the vaccine producer, as has been happening in other countries. As for Brazil, it would cause frustration in all Brazilians, because we would have, with few doses, to choose, in a continental country with more than 212 million inhabitants, who would be the chosen ones to receive the vaccine”.

On the same date, Eduardo Pazuello stated that Brazil had not closed an agreement with Pfizer, as the company would have presented “leonine” conditions, which would have made the agreement difficult, in what was denied by the company’s executive at the CPI.