In a session marked by turmoil and denunciation of harassment, after approving the privatization of Companhia Carris Porto-Alegrense, the City Council of Porto Alegre also approved, on Wednesday (1), the bill authored by the municipal Executive that it institutes. the Program for the Gradual Extinction of the Function of Collector of Collective Transport by Bus of the Capital. Not scheduled to be on the agenda, the project ended up going to the plenary and was approved by 21 votes to 12.

The agenda was included by request of the deputy leader of the government, councilor Comandante Nádia (DEM), and provides for the definitive extinction of the bill collector in 2026. The extraordinary session, which began at 2:00 pm, ended at 11:31 pm.

::Carris: oldest public transport company in the country at risk of privatization::

As the opposition councilors pointed out, in their demonstrations in the plenary, an agreement had been reached between the leaders so that the project would not be put to a vote. During the session, councilors from PCdoB, PT and PSOL asked for more time to discuss the issue. Opposition leader in the Chamber, Councilor Pedro Ruas (PSOL) even submitted a request for more time, but was rejected by 22 votes to 11.

“In the midst of a pandemic, extinguishing jobs is cruelty and does not bring any benefit to society, on the contrary. When he takes the conductor off the bus, he takes the second driver, that person who helps the wheelchair user or another person with special needs”, pointed out Pedro Ruas. According to him, the government wants to create chaos in the transport system and to justify privatization, “to do all the bad things it wants to do, always pleasing the business community, who owns the capital.”

During his speech in the plenary, he emphasized that the tariff impact is caused by the fictitious reserve fleet and the profit rate of businessmen. “This is what impacts the bus fare, not collector’s salary,” he said.

:: Melo presents a project that authorizes the privatization or extinction of Carris ::

“The decision of the Melo government and its allied base was to end the collectors and promote the unemployment of three thousand families in Porto Alegre. A cruel and inhuman attitude of those who do not want to open the black box of private transport concessionaires that make millions and for this puts workers on the street. However, the fight does not end today. It will continue and we will always be on the side of the workers and the population who need it most,” said councilor Aldacir Oliboni (PT), on his social network.

Also through her social network, councilwoman Daiana Santos (PCdoB) commented on the result of the vote. “Eleven-thirty at night we have just suffered a coup from the government. The despair of the workers is because at this exact moment the project that removes collectors from the bus was approved, this is cowardice. This is absurd.”

Councilor Jonas Reis (PT), also through his social network, registered the workers’ reaction after the vote.

Representatives of the Sindicato dos Rodoviários, as well as Carris workers, were prevented from entering the plenary. Because of this, there was a conflict with security guards from the House and members of the Municipal Guard. After much pressure, workers managed to enter the plenary to follow the vote.

“The brutality has become routine in this house, the brutality that is justified in the removal of workers’ rights. I think that the 11:00 meeting, on Wednesdays, of the college of leaders no longer makes sense, if every week we have a meeting on the agenda of this house and then a request will come to this parliament to run over the debates in the city. Unfortunately this is the weekly practice. We are talking about more than three thousand families who have lost their jobs. The only thing that sensitizes us here is the cries of the bus managers”, highlighted councilwoman Laura Sito (PT).

“This parliament should have an ethics committee, teach these councilors who think they can do anything that isn’t exactly that way. I have always respected and have respect for my colleagues, including those who are not part of the opposition base. I will not accept such disrespect at any time. Alderman elected as I should behave. It’s not just apologizing, you’ll need to have efficient measures in this house. Why am I a woman I need to be disrespected all the time?”, she asked.

According to an estimate by the Union of Road Transport Workers of Porto Alegre (Stetpoa), the state capital currently has around 2,600 bus collectors, who earn, on average, a salary of R$ 1,600.

In addition to the project, Amendment No. 5 was approved, which provides for the carrying out of technical studies for the need to include an assistant to support elderly passengers, disabled people, pregnant women and children; Amendment No. 6, which delegates to the Executive the decision to maintain a professional responsible for assisting and assisting people with disabilities to enter adapted vehicles; Amendment No. 10, which enables the institution of the Collaborative System for Recharging the Card of the Integrated Transport System (TRI); and Amendment No. 11, which provides for the preparation of a Voluntary Dismissal Plan (PDV) for public company collectors.

::Against Carris privatization in RS, workers carry out work stoppages in front of garages::

The proposal also foresees that public transport service concessionaires will promote actions to enable the transposition of collectors to other labor markets by providing a qualification course or professional training in a sufficient number of places to serve all their collectors.

Companies can carry out the actions themselves or by entering into contracts, partnerships and agreements with individuals or legal entities, as well as by evaluating the possibility of using trained collectors for other existing activities and functions, including the role of driver.

According to the project, the execution of trips without the use of a collector is allowed in the following cases: in the provision of the public transport service by bus whose trip started between 10:00 pm and 4:00 am; in the provision of the service on Sundays, holidays and Free Pass days; and on specific dates, lines, periods or times, subject to prior regulation by the Municipal Secretariat for Urban Mobility (SMMU), through the Public Transport and Circulation Company (EPTC). Carrying out these trips without the use of a collector may not result in the collectors being dismissed.

The payment of the fare between 10 pm and 4 am, for the safety of users and crew, must be made exclusively by means of an Electronic Ticketing System card, debit card, credit card or other electronic forms of payment, be established by decree.

Through the social network, Mayor Sebastião Melo (MDB), celebrated the approval. “The councilors approved this night the first project of the set of measures that we proposed to modernize the system and face the crisis of public transport. The program for the gradual extinction of the collector function will take place over more than 4 years, until the end of 2025 “, he wrote.

According to the mayor, the change will occur with the non-replacement in the termination of the contract by the worker’s initiative, dismissal for just cause, retirement, death and interruption or suspension of the contract.

In a more recent statement, Melo stated that one of the reasons he is privatizing Carris is because of the workers’ strike. “Today’s strike would not take place in a private company. In fact, a strike by those who receive well – and up to date – in the middle of a pandemic is regrettable. It is the people who lose,” he said. 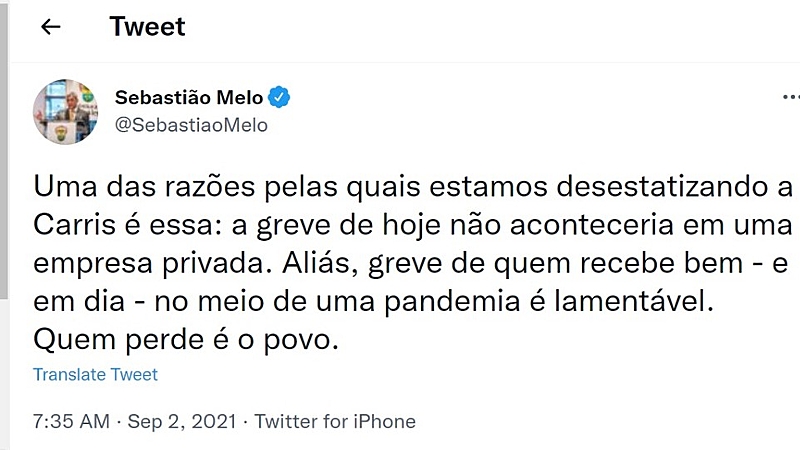 Since 4:00 am this Thursday (2), workers at the company Carris have been on strike against the privatization of the company. According to an agreement made at the Regional Labor Court (TRT), only 65% ​​of the fleet will continue operating as long as the protest continues. In addition, buses are circulating with a black stripe as a sign of repudiation against the proposals sent by the city to the City Council.

“It’s funny that when private companies stopped serving 23 lines, the mayor didn’t charge anything, and it was a pandemic period. And we earn the same salary that private companies pay because we follow the same collective agreement. If he withdrew the privatization project Carris would not be having a stoppage. We are not paralyzed, we are running 65% thinking about the population, because the population deserves quality transport,” said the conductor and a representative of Carris employees, Rosangela Pires Machado, about the manifestation of the Mayor.

Asked what actions workers will take in relation to the approval of the project, Rosangela said that meetings will be held to analyze what can be done. “This vote took everyone by surprise. We feel betrayed. Let’s see what we do,” he concluded.

* With information from the Municipality of Porto Alegre.